The visit was initiated and organized by the American Jewish Committee. 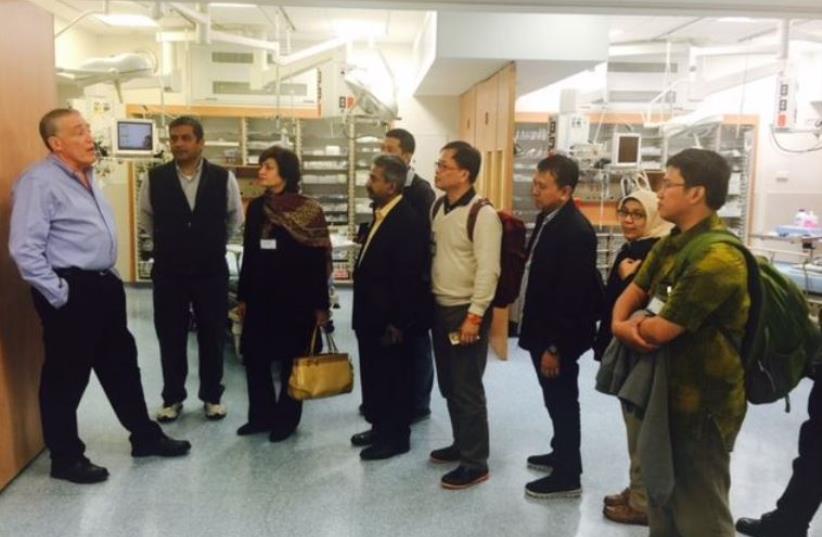 Prof. Avi Rivkind (left) with southeast delegation
(photo credit: HADASSAH)
Advertisement
A team of experts in treating victims of natural disasters from Indonesia, Sri Lanka and India visited Hadassah University Medical Center in Jerusalem’s Ein Kerem on Thursday to see how coping with trauma and large natural catastrophes is done here.The unusual visit focused on Prof. Avi Rivkind, head of Hadassah’s level-1 trauma unit. Some of the visitors came from countries that have no diplomatic relations with Israel, Rivkind said, and they included senior doctors and government officials responsible for coping with trauma and disasters. Rivkind, who was among the founders of the unit in 1991, told the delegation how the hospital copes with victims of terror, road accidents and stabbings and others hurt by sharp objects. He described Hadassah teams’ treatment of victims of tsunamis, earthquakes and floods abroad; the visitors showed much interest in treatment protocols, how the work was divided up among medial staffers and neurological and orthopedic rehabilitation.Those from Sri Lanka were surprised to hear that Rivkind visited their country in 2004 to help trauma victims in that year’s tsunami.The visit was initiated and organized by the American Jewish Committee that works around the world to carry out unofficial ties with many governments and countries under Project Interchange, which was launched 40 years ago. Every year, some 35 delegations of non-Jewish opinion leaders come here for an educational seminar to learn about Israel.