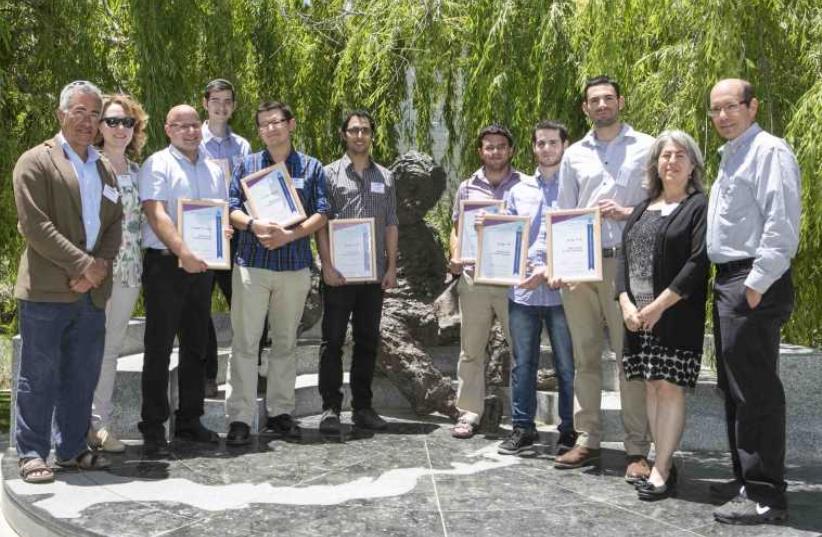 Recipients with Marcel Adam’s children, Linda and Silvan
(photo credit: Courtesy)
Advertisement
Seven outstanding Israeli doctoral students received on Sunday a total of $ 1 million in prestigious Adams Fellowships of the Israel Academy of Sciences and Humanities m 95-year-old Canadian philanthropist Marcel Adams. A Holocaust survivor who fought  in  the War of Independence and made his fortune in Canadian real estate, Adams established the fellowships in 2005; to date, 102 young and promising Israeli researchers received fellowships.All of the recipients were men, even though until now, the academy’s professional committee chose 25 among the previous 95 recipients. “It just turned out that way this time,” an academy spokesman said.Each of the seven will receive over $100,000 for up to four years of doctoral studies ($30,000 a year), as well as exemption from tuition. Academy president Prof. Ruth  Arnon said at the ceremony in Jerusalem that the meticulous screening process of the universities and of the academy’s professional committee of the  fellowship  program, ensure that the winners’ high quality,” she said. “We are proud and happy that out of 72 alumni till today, 23 have already been given senior faculty positions in universities, nine are in hi-tech  companies and two work in hospitals. The foundation’s investment in these young and talented scientists bears fruit and ensures the future of science in Israel.”The recipients are:*Izchak Goldshtein, a 29-year-old doctoral student of computer science who  served  over  six years as a cyber-security specialist, a team leader and a projects officer in an elite IDF technology unit within the Atuda (academic reserve) of the Israel Defense Forces. He is the second child of his family to win this fellowship. His older brother Moshe won a fellowship in 2007 and is now teaching physics at Tel Aviv University (TAU).*Barak  Hirshberg was  born  and bred in Jerusalem where he was educated at the  Boyer High School and became interested in the sciences, particularly chemistry.  He joined the IDF for six years as a theoretical chemist  in RAFAEL Ltd. and left  to  study  for his  doctorate  at  the  Hebrew University (HU) despite an offer for a  position by RAFAEL.* Eran Sagi high school to complete his studies externally at the age of 16 because he was “bored.” He went on to study physics at TAU. He is now specializing in condensed-matter physics at the Weizmann Institute of Science in Rehovot,  focusing on electronic systems. He has several publications in prominent scientific journals. His plan is to return to an academic position in Israel
following a post-doc abroad, so he can help educate a new generation of scientists and engineers.Omri Azencot’s research at the Technion-Israel Institute of Technology is considered unique to Israel since he specializes in physics-based simulations in computerized graphics. He collaborates with a lab at the University of Stanford  in California, Ecole Polytechnique in Paris and the Institute for Numerological Simulation in Bonn. He plans on developing this field in Israel, which can attract companies and lead to cooperation between the academy and industry and establishing research centers within Israeli hi-tech companies.* Ido Sagi, a student of the top one percent of HU, is doing his doctorate in the
the use of stem cells and his research focuses on their potential for replacing human tissue destroyed by disease.* Michael  Kalyuzhnyson, the son, grandson  and  nephew  of  scientists, came from  Russia  when  he  was five  and was brought up on the Carmel in Haifa.  From a young age, he was interested in science and even participated in science camps. He  decided  to  study  biology  at HU, where  today  he  is  a  doctoral  student  of ecology.* Yinon Spinka, a doctoral student of mathematics at TAU  participated in Bar-Ilan University’s mathematics  program  since high school,  completing  his  matriculation exam in 10th grade. Following his army service, he  returned to continue his degrees with honors  and now concentrates on models from statistical mechanics, collaborating with researchers both in Israel
and abroad.Adams was born in Romania in 1920 and spent World War II in a Nazi labor camp. A Holocaust survivor, he  arrived penniless in Canada 64 years ago. Seven years later, in  1958, he established a real estate company, which flourished over the years. Despite his age, he is still active in business and is at work every day by 8 a.m.