Liberia thanks Israel for helping to wipe out its Ebola outbreak

Visiting Liberian senate president says his nation has great admiration for Israel and “can learn much from you in the fields of innovation, technology, agriculture and medical research.” 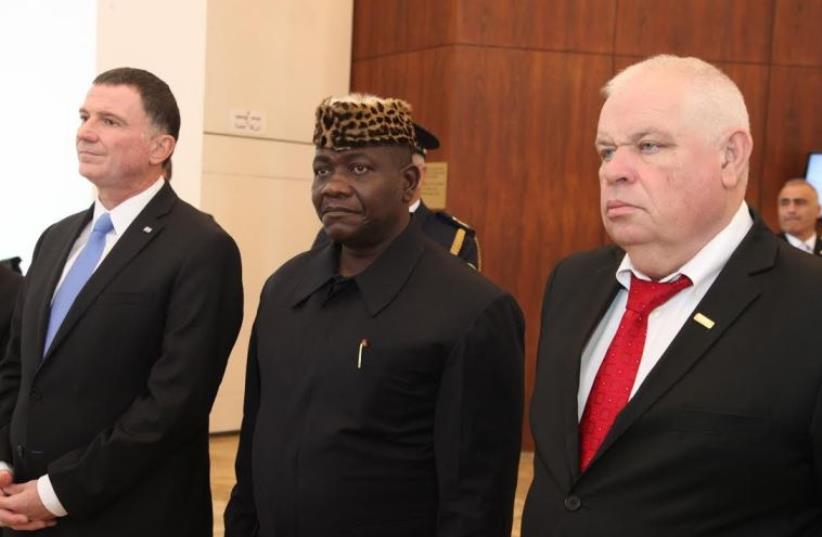 Knesset Speaker Yuli Edelstein and Liberia’s senate president Armah Zullu Jallah, with Knesset Director-General Ronen Plot
(photo credit: KNESSET)
Advertisement
Liberia’s senate president Armah Zolu Jallah, making the first visit to Israel by any head of his country’s parliament, thanked this country for its help in wiping out the fatal disease Ebola in Liberia.Speaking with Knesset Speaker Yuli Edelstein in his office on Wednesday, Jallah said that Liberia has great admiration for Israel and “can learn much from you in the fields of innovation, technology, agriculture and medical research.” He especially thanked Israel for its help – which included mobile clinics, training of medical teams and visits by Israeli medical experts – to halt the severe Ebola outbreak there that killed many residents.MK Edelstein replied, “I am proud that we did our part and helped Liberia become free of Ebola. It is a world interest to which the State of Israel is a partner.We are always ready to contribute our knowhow and skills” to benefit Liberia and others. He added that it was the first time that a head of the Liberian parliament was visiting the Knesset. After Jallah was received in a solemn ceremony in which Liberia’s flag was raised and the Liberian legislator signed the visitors’ book, the two parliamentary leaders sat down for a private talk on establishing a firm basis for advancing working relations between the two parliaments and the countries.Later, the Knesset speaker welcomed Jallah from the podium of the plenum. “Since we established diplomatic relations in the 1950s, Liberia has shown friendship to Israel, except when it cut off ties as a result of the Yom Kippur War, along with other African countries,” Eidelstein said.“When relations were renewed in 1983, we signed accords in the field of security, aviation technology, economics and more. We cooperate with you also through Foreign Ministry courses and are happy to do whatever we can in training and operating equipment. I thank you, in the name of the Knesset and its members, for the visit of Your Excellency and hope it will contribute to strengthening the relations between the two countries in all aspects.”
Sign up for the Health & Wellness newsletter >>