There are still seven general hospitals and two health funds without an MRI, and a total of only 21 scanners around the country. 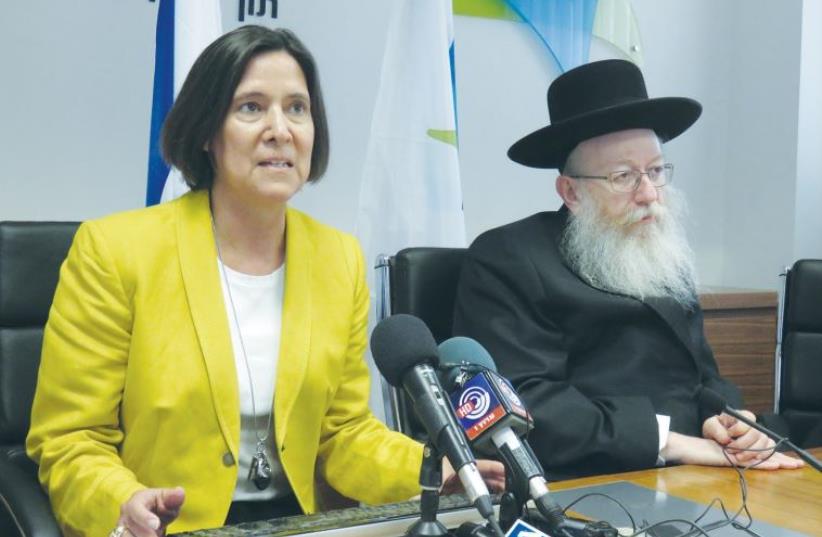 DR. OSNAT LUXENBURG, head of the Health Ministry’s medical technology and infrastructure administration, and Health Minister Ya’acov Litzman announce the new MRI reforms
(photo credit: JUDY SIEGEL)
Advertisement
The Health Ministry has launched a program to more than double the number of magnetic resonance instruments (MRIs) – the $3 million devices that peer into the body layer by layer to improve diagnoses and assist in the treatment of some diseases – to 46 by the end of 2017.The scanners use magnetic forces rather than radiation, thus posing less risks, but cannot be replaced by computerized tomography devices, which are still needed to diagnose many medical conditions.Health Minister MK Ya’acov Litzman conceded that the number of devices – only 10 five years ago – has been very inadequate, but he began to increase their number during his first term as deputy health minister.There are still seven general hospitals and two health funds without an MRI, and a total of only 21 scanners around the country.The ministry will cover the cost for hospitals that lack them. In addition, the number of hours in which the MRI radiology institutes function will be expanded to three shifts – round the clock and for emergencies on Shabbat and festivals as well.Some 138,000 MRI scans are performed now each year.This is aimed at reducing the wait for a scan, said Litzman at a Sunday press conference in his Jerusalem offices. The average national waits for a scan this past June was 51.7 days, while the maximum wait ranged from 161 in the central district to 24 days in Haifa.In Jerusalem, the average queue is 71 days, with a maximum of 105 in June; 53 days (average) and 77 (maximum) in Tel Aviv; and 48 and 120 (respectively) in the South. By the end of 2016, the queue should reach the target of 14 days, Litzman said. “I won’t hesitate to demand that employees work longer hours, even through the night, to reduce the queues, and of course pay them overtime for it.”The minister added there is “no reason that citizens should wait many months for an MRI scan.This means unnecessary suffering for patients, and we must change this. We decided to require every general hospital to have MRIs and operate them, and we will participate in their funding. We will boost technician manpower and act to set up a national center where expert radiologists will interpret the findings.The minister invited patients who have been informed of the need to wait many weeks and months to contact his office at (02) 508-1325, fax his office at (02) 647-3861 or send an email to mri.sar@moh.gov.il. Since he recently declared that scans will not take more than two weeks to undergo, he has received “hundreds” of complaints, and they are being dealt with, the United Torah Judaism minister said.The State Comptroller’s report has complained about the poor accessibility to MRI scans in various parts of the country, while the Organization for Economic Cooperation and Development has chastised Israel for having too few scanners for its population (although it did not look at the efficiency of their use).Dr. Osnat Luxenburg, director of the ministry’s medical technology and infrastructure administration, said the shortening of the queues will “not save lives, as all emergency patients get MRI scans quickly, but it will greatly reduce the suffering of patients” who have had to wait for long periods and run about to get scans.Prof. Jacob Sosna, director of the radiology and medical imaging department at the Hadassah University Medical Center in Jerusalem’s Ein Kerem, who is also head of the Israel Radiology Society, said 25 medical residents in radiology will soon be added, with a fellowship for specialists in the field to immediately boost the number of experts who can interpret the scans. The aim is to increase by 15 percent the number of such radiologists, who currently number only 70.A national center for training MRI radiologists and technicians and specialists to interpret scans will be set up at Sheba Medical Center at Tel Hashomer, which has an excellent simulation center, reporters were told.At the press conference, which was also attended by ministry director-general Moshe Bar Siman Tov and directors of all four health funds, Litzman said he was gratified by financial support from the Treasury and cooperation from the health funds and all other players involved. Seven more MRI scanners will be added by 2017 to public hospitals with emergency rooms that lack the equipment, and two for Leumit and Meuhedet Health Services, the two smallest health funds. Initially, it will train 18 technicians starting in November. A total of 77 manpower slots for technicians will immediately be added at the state hospitals, Litzman said.For years, the ministry declined to give hospitals licenses to purchase MRIs, because it feared that they would be “overused” and “unnecessary scans” would be carried out.The Treasury was concerned that much money would be “wasted.”But both changed their minds, and the Health Ministry began to help finance scans. Now the Treasury has agreed to allocate money for their purchase.Litzman noted that the price of MRI scanners and the cost of each scan are going down constantly, making their use more economical.The ministry has set up a unit to supervise the number of scans given, how long the queue is at all hospitals and ensure that unnecessary scans are not performed (as by physicians who want to protect themselves from malpractice suits), and supervision will be carried out on an ongoing basis.