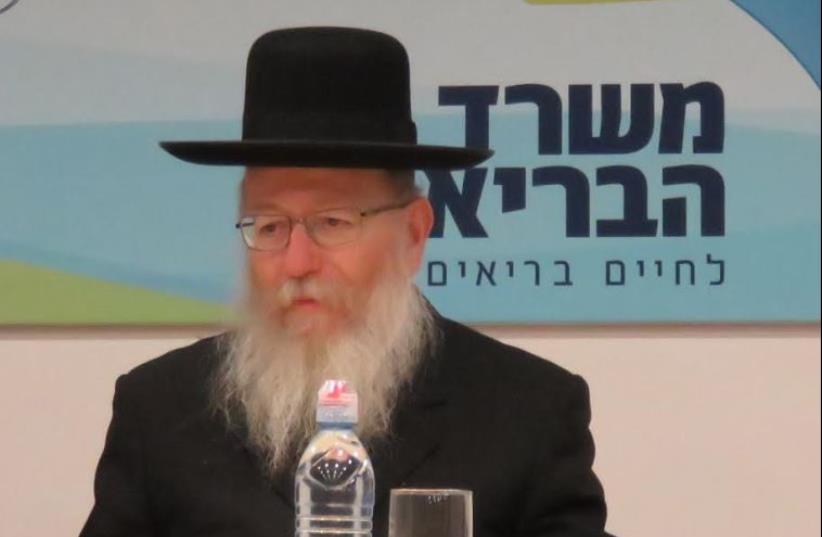 Health Minister Ya’acov Litzman
(photo credit: Courtesy)
Advertisement
In a few days, Health Minister MK Ya’acov Litzman is to present a draft bill to include some lifesaving and life-extending drugs in the health funds’ optional supplementary health insurance policies, he announced in the Knesset’s Labor, Social Welfare and Health Committee on Monday.This had been the arrangement some years ago, but it was canceled on the grounds that poor people who could not afford supplementary health insurance would lose out. Almost 20 percent of the population do not have supplementary policies, but this includes an unknown number of wealthy people who don’t need them because they have private health insurance.This time, however, Litzman said that the health funds would cover the costs of these important drugs for families that are under the poverty line without them having to pay for them.“I don’t expect that billions of shekels more can be added to the basket of health services,” Litzman said, “so supplementary health insurance policies are the solution. I will consider whether to allow the voluntary committee to expand the basket each year to recommend which drugs will be included in the supplementary policies. I haven’t yet decide what sums of money will be included, but I will not give up on this matter.”Committee chairman MK Eli Alalouf said that the minister will present the draft bill within a month, and during that same week, the committee will hold an intensive discussion of it, including the budgetary aspect.“The proposal will receive the maximum priority in the committee,” he promised.Former health minister Yesh Atid MK Yael German strongly opposed the move, saying that it would be “dangerous for the public health system. The State of Israel must take upon itself the treatment of patients and add [each year] to the basket [more than the NIS 300 million a year it has added]. It’s easy to tell the public to pay. We must examine whether the four health funds allocate all the money for drugs that they receive from health taxes.”“If lifesaving and life-extending drugs are in the supplementary health insurance policies, there will be no pressure to put them in the health basket,” said Zionist Union MK Michal Biran.Prof. Eliezer Rachmilevich of the Israel Medical Association said that there must be a differentiation made between two kinds of drugs – the lifesaving ones in the regular basket and the life-extending ones in supplementary policies.Ran Ridnick of the Finance Ministry’s budget division told Litzman: “We are in a deep dispute over this. In the public basket, there are already lifesaving drugs. Supplementary health insurance premiums have risen dozens of percent in recent years. Only a few months ago, we approved legislation to reduce their premiums and reduce health costs to the public.”To this, Litzman raised his voice and said: “On what are you basing this? For what will the premiums be? I say no! I decide, not a Treasury bureaucrat. I am responsible for health, and I will set policy.”Ridnick responded that “there must be actuarial balance, and this is not my decision.”Litzman countered angrily, “There is a minister who must decide. Either I lead the Health Ministry or I am led. I want to create geriatric nursing insurance, but you said no, because it raises taxes. But this is lowering taxes to save money from private medicine. Maybe I am right sometimes? It will not help any bureaucrat or anybody who sends him. No! Maybe trust me? Maybe I am doing something positive. I will save lives daily with this decision.Do you want me to give up? Are you complete crazy? It won’t help you, not certain MKs and not Treasury bureaucrats.”
Sign up for the Health & Wellness newsletter >>