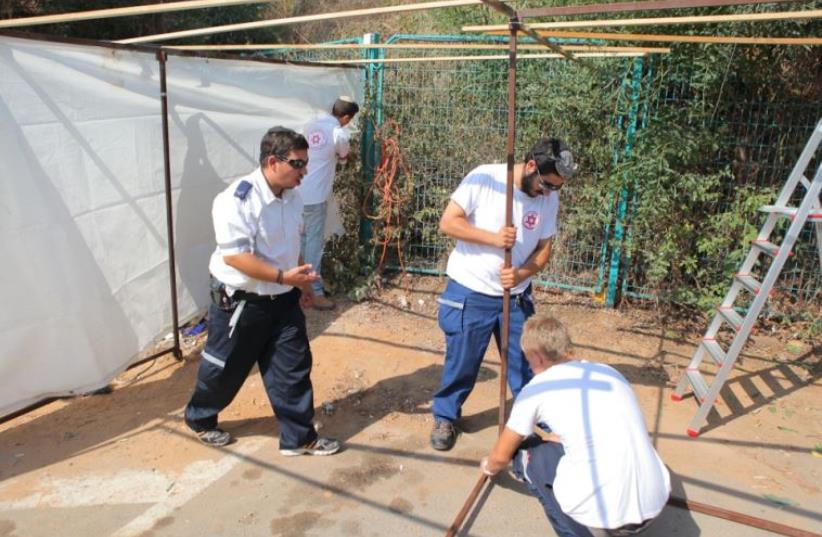 Succa building
(photo credit: MDA)
Advertisement
Magen David Adom reported that an 82-year-old man was electrocuted on Thursday while building his succa in Jerusalem.He was rushed by ambulance in critical condition to Shaare Zedek Medical Center, where he died of his injuries a few hours later. His identity has not been released for publication at press time.Every year before Succot, people suffer injuries while carelessly constructing flimsy booths for the holiday on both the ground and on balconies.For example, last year, said MDA , a 44-year-old man in Upper Nazareth fell from a height of two meters and was moderately hurt in the chest, and a 16-year-old in Zichron Ya’acov was jabbed and suffered an infection when he handled palm leaves to cover his succa.The seven-day holiday begins on Sunday night.The first aid and ambulance organization said that when booths are built on high floors or on special attachments to small balconies, heavy objects like hammers, temporary roofs, flower pots and planters can fall and harm people below. Do not climb on the railings of balconies to reach the frame, walls or covering of the booth.When building a succa on the ground, especially among weeds and rocks, always wear high-topped closed shoes. Prepare the earth around the site to prevent snakes, scorpions and other creatures from reaching it easily. Make sure the booth is not near electricity and gas balloon equipment and that occupants can get out of the booth quickly and easily.If the walls are made of wood, be careful that they are standing solidly and won’t fall down on people nearby.When connecting electricity or lighting to the succa, make sure that outlets are in good working order and never touch live wires, MDA warned.Hanging the decorations can be dangerous if ladders or chairs are not stable. Always have a responsible adult supervise all construction work and decoration of the succa. Don’t light candles in the succa or leave them burning there. Call MDA at 101 if anyone is injured.While purchasing the Four Species or decorations near busy streets, make sure that you are not in the way of traffic; children must be carefully supervised at all times.Meanwhile, MDA reported that it treated 2,019 people during Yom Kippur who suffered from heat prostration, weakness or road accidents from cars, bicycles and other wheeled vehicles. Of those treated, 1,909 required hospitalization.A total of 234 people fainted, and 67 worshipers in synagogues had to be treated on the spot or evacuated by ambulance.One hundred and forty women were taken to hospitals to give birth during the fast.
Sign up for the Health & Wellness newsletter >>