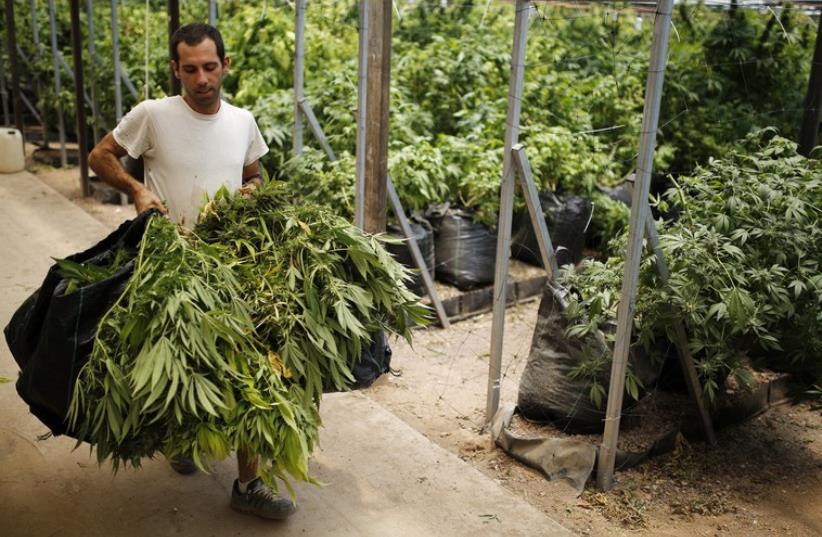 A worker carries sacks of newly harvested cannabis plants at a plantation near Nazareth
(photo credit: REUTERS)
Advertisement
A medicinal marijuana patient whose license to grow his own cannabis was revoked in 2013, has filed a lawsuit against Israel’s health ministry for providing him with plants tainted by dangerous pesticides which are illegal for human consumption. “Patient R” is one of only a dozen Israelis who have been issued permits to grow his own plants, and is the only patient involved in the lawsuit. “He is suing the health ministry for providing him with dangerous substances and for not having clear rules for using pesticides in medical cannabis in Israel,” Oren Lebovich, chairman of the Green Leaf Organization and editor-in-chief of the Israeli Cannabis Magazine, told The Media Line.Israel is known as one of the largest producers of medicinal marijuana in the world; at least 23,000 Israelis have prescriptions to purchase the drugs. Many of them suffer from cancer, chronic pain and a number of other ailments.Patient R claims to have become sick after obtaining his cannabis plants from Teva-Adir, one of the eight suppliers in Israel, even finding mold in some of the flowers. Upon this discovery in 2013, he approached the ministry of health, but was ignored. He then consulted criminal lawyer Yaniv Peretz. Peretz sent Patient R’s cannabis sample from Teva-Adir along with samples from two other suppliers, Tikun Olam and Seach, to be tested at the Israeli Chemical Testing Laboratory by Israeli cannabis researcher, Dr. Noam Chehanovsky. Chehanovsky allegedly found contamination from nine pesticides in the Tikun Olam sample, according to Peretz. Fungicides, insecticides, and plant growth regulators in potentially dangerous quantities were reportedly discovered in the sample. Tikun Olam denies any use of pesticides.“According to our chief agronomist, who has a Ph.D. in agriculture, and other experts, we cannot reply to the findings of the report that was sent to us because they did not send the batch numbers or where they took the samples from and how the tests that they did were done,” Ma’ayan Weisberg, head of international relations at Tikun Olam told The Media Line.“These pesticides are not allowed to be used on food and here we are talking about medicine and a medicine that has to be heated up for consumption,” Lebovich said. “Heating up these pesticides is really bad because the chemicals go through the lungs and not through any filters, like the liver, which filters the dangerous stuff out when you eat contaminated foods.” In addition to the contamination issue, all but three Tikun Olam samples had much lower values – as much as 20 percent -- than advertised of active compounds, like THC, the psychoactive compound that can relieve pain and increase appetite, according to Chehanovsky’s report. “THC levels are the most important thing when dealing with cancer patients, who use cannabis as a treatment,” Lebovich said.For example, Eran-Almog, one strain in question, is advertised as having a THC range of 24%-28%, when, in reality, after testing, it only had 3.2% THC, Lebovich said.According to Peretz, after sending Dr. Chehanovsky’s findings to the health ministry, he received a response suggesting using a different supplier.“With these bad results, I would have expected the health ministry to have been more determined to look into this finding,” Peretz said. “The Ministry of Health asked for more information from me instead of checking the suppliers.” Peretz said he then consulted the opinion of Tuvia Yaacoby, a former Chief Herbologist for the Plant Protection and Inspection Services Department at the Ministry of Agriculture and Rural Development.“It is highly concerning the amount of pesticides found in the cannabis,” Yaacoby told The Media Line. “This was shocking especially after finding out that there was a government announcement on the 26th of June articulating that medical cannabis be grown according to good practices. The government didn’t mention the use of pesticides.” Yaacoby, whose job was to check and regulate pesticides in Israel, believes that using pesticides is very dangerous, especially for sick patients.“I am talking about inhaling carbon monoxide and nitrogen and other poisonous gases. I am looking at cannabis like Tylenol because it is a medicine and it should be treated like using a medicine and it should be clean and pure, without any residues like pesticides,” Yaacoby said.
Sign up for the Health & Wellness newsletter >>