According to IATI, Israel’s hi-tech industry creates 7,000 engineering jobs each year, but only 4,500 engineering students enter the work force annually. 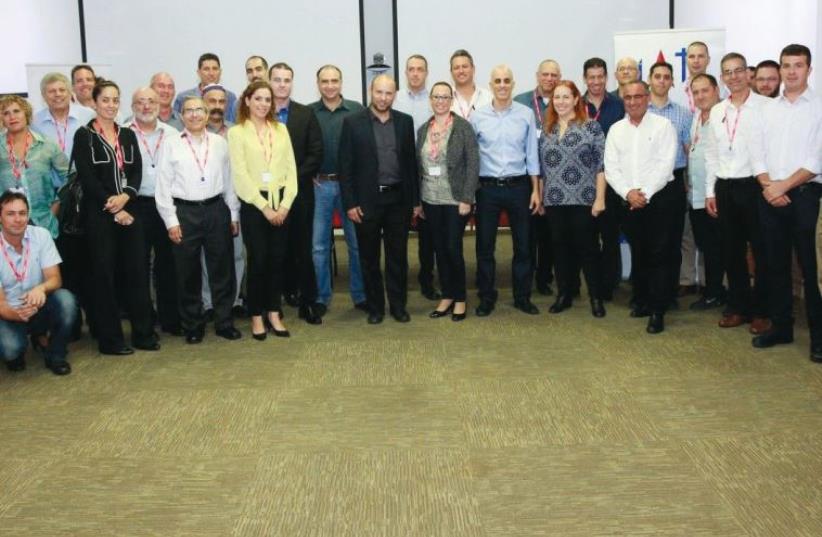 EDUCATION MINISTER Naftali Bennett (center) poses with managers of multinational corporations funding a program to encourage Israeli students to code
(photo credit: ALEXEI SITINKOV)
Advertisement
A group representing leading multinational corporations with development centers in Israel on Tuesday pledged NIS 1.5 million to fund a Coding Olympics competition to encourage Israeli students to program.“It’s not trivial that the industry is choosing to go along with the government’s willingness to create a project, the fruits of which we will see in the labor market only in 10 years in the best case,” said Education Minister Naftali Bennett, who met with members of the Israel Advanced Technology Industries industry group on Tuesday.The group consisted of managers from 50 leading multinational corporations that have R&D centers in Israel such as Microsoft, Intel, Apple, Cisco, SanDisk, HP and Qualcomm.The Education Ministry and the Rashi Foundation, an education-focused philanthropy, will match every shekel IATI raises from its member companies three-fold, bringing the program budget to NIS 6m.Yoram Yaacovi, general manager of the Microsoft Israel R&D Center and chairman of IATI’s multinational corporation forum, said last week that Israel was “running out of geeks” – a reference to the yawning divide between the number of engineers in demand and the number graduating from Israeli schools each year.According to IATI, Israel’s hi-tech industry creates 7,000 engineering jobs each year, but only 4,500 engineering students enter the work force annually.The Coding Olympics will be divided into two categories. From 3rd-8th grade, schools will compete for prizes in online programing and educational game development. The 20 winners will receive cash prizes, plus the opportunity to attend a programming camp.The high school version will be for computer science students who will compete in groups led by leading engineers from the hi-tech sector.In Tuesday’s meeting, SanDisk pledge NIS 400,000 toward the program; Qualcomm NIS 150,000; and Infinity NIS 100,000 – closing 43% the NIS 1.5m. goal.