Dr. Guy Ashkenazi, Chemistry teacher in Jerusalem, won the award for his combination of scientific research and teaching in the classroom. 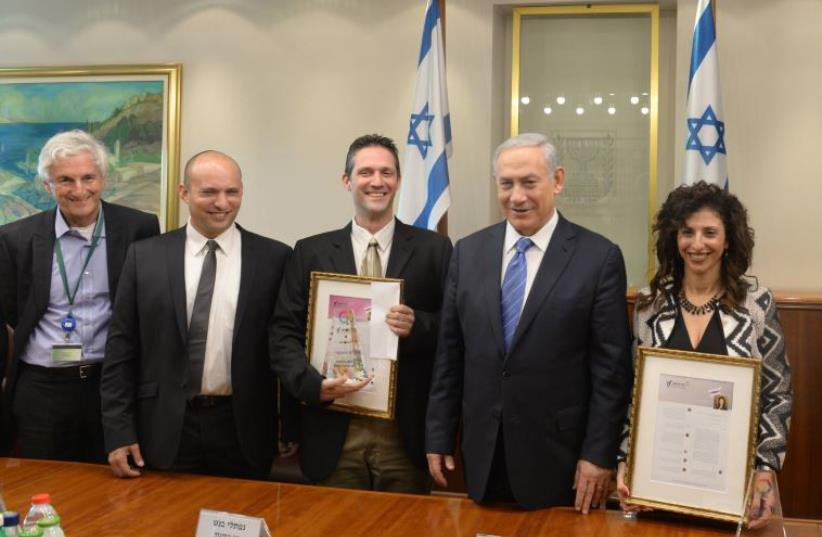 Prime Minister Benjamin Netanyahu presents the Trump prize for educational excellence to Dr. Guy Ashkenazi
(photo credit: GPO/AMOS BEN GERSHOM)
Advertisement
Prime Minister Benjamin Netanyahu awarded the Trump Master Teacher Award to Dr. Guy Ashkenazi on Monday, who has worked as a Chemistry teacher for the past eight years at the Israel Arts and Science Academy in Jerusalem. The prize was awarded for a combination of scientific research and teaching in the classroom, “uncompromising pedagogic professionalism, his personable attitude, and the fostering of knowledge and commitment among pupils and his fellow teachers,” the prime minister’s office said. Honorable mentions were given to Dr. Tali Dvora, a mathematics teacher in Kfar Saba, and Michal Walter, a physics teacher at the Education for the Future Amit Campus in Or Akiva.The Trump Foundation was established in 2011 by brothers Eddy and Jules Trump, businessmen originally from South Africa that now reside in Florida. The aim of the Trump Foundation is to foster quality teaching in mathematics and science in high-schools.Along with the prime minister, Education Minister Naftali Bennnett and Trump Foundation chairman Eddy Shalev were also present at the ceremony. “Israel is a knowledge super-power and I’m not exaggerating about that,” said Netanyahu at the ceremony. “Everything depends on this,” said the prime minister about scientific knowledge, “without it there’s nothing,” he added. “We know that this is an existential need of ours, and therefore we attribute great importance to any indication or expression of excellence in this field, and of getting the best out of every single pupil. It’s critical for us.”Bennett called the teachers receiving prizes “heroes of our generation,” and, in a  similar vein to Netanyahu, said that security depended not only on the armed forces but on “our development as people, as a society, our ability to dream, to build, and to create, every morning, new opportunities for ourselves and for our future, which we love so much.”