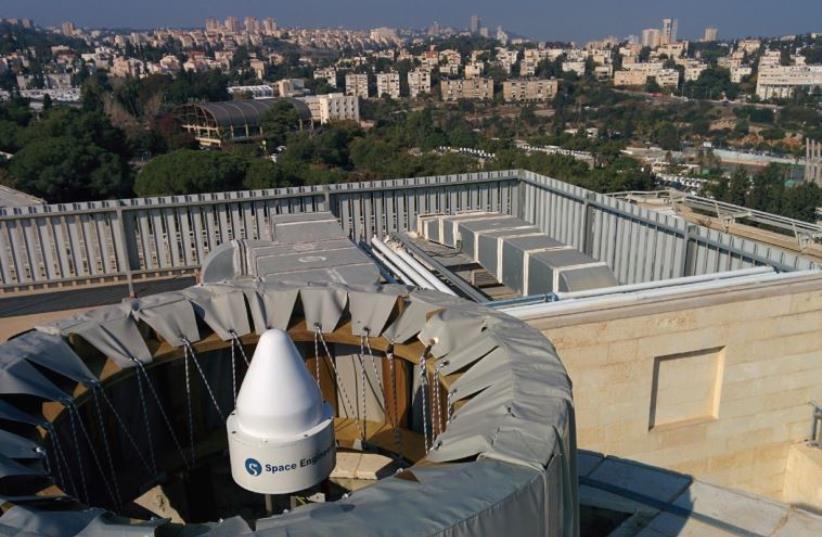 THE EGNOS SATELLITE station sits on the roof of the Technion’s faculty of civil and environmental engineering.
(photo credit: TECHNION)
Advertisement
A first “reference station” of the European Geostationary Navigation Overlay Service satellite for improving vehicle navigation systems has been installed in Haifa at the Technion-Israel Institute of Technology.The station will not only make navigation 90 percent more accurate but will also help in the study of ground movement in the region.EGNOS is the European equivalent of the Wide Area Augmentation System in the US. The Haifa station is the result of collaboration between the European Space Agency, the Israel Aircraft Industries and the Technion’s engineering, mapping and geo-information faculty.The EGNOS system, operated by the European Space Agency, is an expansion of the US global positioning system. It consists of three geostationary satellites that are located above fixed points on the Earth and a network of ground reference stations. EGNOS satellite signal transmitters allow users to get a location in Europe and its surroundings in real time with an accuracy of one meter.“The station has national significance because it will improve the system’s capabilities in the region,” explained Prof. Gilad Even-Tzur, the head of the new station. “This system will be open to anyone that has a dedicated GPS [global positioning system] receiver. It has numerous applications for navigation, air travel, ground and naval systems, guidance and mapping systems. Since this is a dramatic improvement in accuracy [compared to GPS], it is clear that the system is very attractive for anyone who needs accurate and reliable locations.”Even-Tzur, of the Technion’s civil and environmental engineering faculty, is an expert in geo-information and geodesics – setting positions in three-dimensional space on Earth and in outer space.“Since movement is very slow, it’s clear why the GPS system gave a huge boost to this field. The technology allows us to measure not only the horizontal movement of the land, but also the ascension of areas like the Carmel ridge, which occurs at a rate of a few millimeters per year as a result of ground movement in the Carmel rift area,” Even-Tzur said.He noted that the accuracy depends, among other things, on the type and quality of the receivers. “Whoever uses the GPS on their mobile phone today can enjoy accuracy as close as just 10 meters. Such precision helps you drive, but sometimes it isn’t enough. EGNOS will give the driver much greater accuracy – even within just one meter. I, as a researcher who uses sophisticated GPS receivers, can reach accuracy of a few millimeters, which is critical in following movements of the land,” he stressed.EGNOS uses sophisticated GPS receivers, he said, the increased accuracy it provides meets a very critical need when monitoring ground movements.
Sign up for the Health & Wellness newsletter >>