New Worlds: Here's looking at you

Chameleons, of which there are over 200 species, live naturally in the tropics and desert but are commonly kept as pets all over the world. 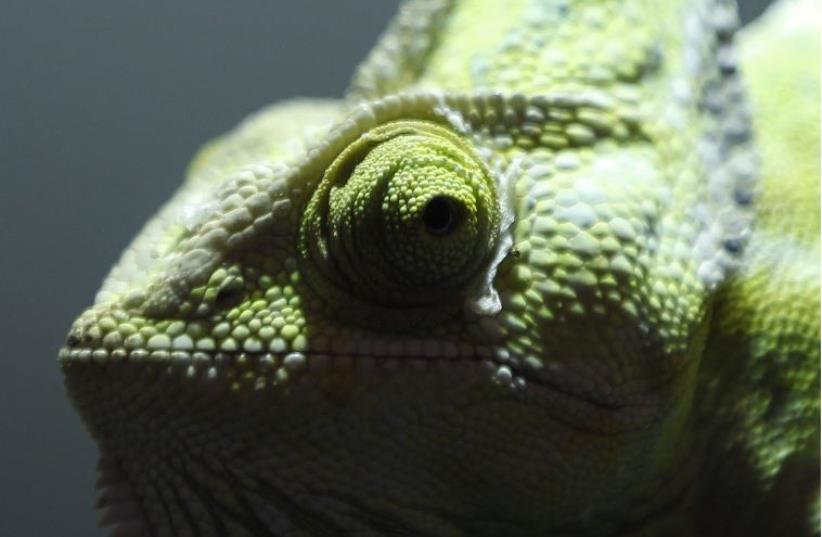 A chameleon is seen in a pet shop in Duisburg August 4, 2012
(photo credit: REUTERS)
Advertisement
Chameleons are lizards known for two talents – the ability to change color, and eyes that rotate independently and seem to be looking in two different directions at once. But according to researchers at the Technion-Israel Institute of Technology and the University of Haifa who just published their study in the Journal of Experimental Biology, chameleons’ swiveling eyes are as independent as once thought. “To our knowledge, this is the first demonstration of this capacity,” the researchers said.Chameleons, of which there are over 200 species, live naturally in the tropics and desert but are commonly kept as pets all over the world. They have intrigued scientists and non-scientists alike with their ability to change color and skin textures and their seemingly roaming eyes. Humans are at a disadvantage – they have to turn their heads to have a wider – but still relatively narrow – field of vision. But the adaptable lizards enjoy a wider field of vision and can swivel their eyes independently. Called voluntary strabismus (crosseye), this ability allows the chameleon minimize its body movements to reduce the likelihood of revealing its presence to both prey and predators.Technion Prof. Ehud Rivlin and University of Haifa Prof. Gadi Katzir decided to investigate the matter by getting chameleons to play a computer game especially designed to potentially frustrate the animals, with the aim of solving the riddle of whether chameleons really enjoy eye independence.When the researchers showed chameleons a double image of a tiny insect moving opposite directions across a computer screen, the reptiles focused first on one image with one eye while the other eye “wandered.” Suddenly, both eyes locked on one image a nanosecond before the reptile cocked and fired its dart-like, sticky tongue.“There were a few seconds of indecision when the chameleons were deciding which target to shoot at,” said Rivlin. “If the eyes were truly independent, one would not expect one eye to stay put and then have the other eye converge. But we found that once the chameleon made its decision about which target to fire on, it swiveled the second eye around to focus on the same simulated fly the first eye was locked on.”This behavior pattern, said the researchers, suggests that the second eye has knowledge of where the first eye is directed. That the chameleons are able to track objects moving in opposite directions before deciding which one to target suggests that their eyes are not really independent, as many have believed.According to the researchers, many animals – especially fish and birds, but not mammals – have wandering, independent eyes, with each eye connected to the opposite side of the brain so that the left part of the brain knows what the right eye is doing, and vice-versa.That’s more common than we realize, they said.But chameleons are different.“We demonstrated that when chameleons are presented with two small targets moving in opposite directions, they can perform simultaneous, smooth, monocular visual tracking,” said Rivlin. “We suggest that in chameleons, eye movements are not simply ‘independent,’ but are disconjugate during scanning, conjugate during binocular [two-eye] tracking, and disconjuate but coordinated during monocular [one-eyed] tracking. Each eye is aware of its own location and the orientation of the other eye. It is just a different kind of cooperation than takes place in human binocular vision.”NEWSPAPERS PREDICT WEIGHT What you’re reading now secretly tells you whether your country will be skinnier or fatter in three years. After analyzing 50 years of all food words mentioned in major newspapers like The New York Times and The Times of London, a new Cornell University study shows that the food words trending today in 2015 will predict a country’s obesity level in 2018.These findings provide public health officials and epidemiologists with new tools to quickly assess the effectiveness of current obesity interventions.“The more sweet snacks are mentioned and the fewer fruits and vegetables mentioned in your newspaper, the fatter your country’s population is going to be in three years, according to trends we found from the past 50 years,” said Brennan Davis, associate professor of marketing from California State University at San Luis Obispo. “But the less often they’re mentioned and the more vegetables are mentioned, the skinnier the public will be.”This study, published in the journal BMC Public Health, analyzed all of the different foods mentioned in stories in The New York Times (and The Times of London) and statistically correlated them with each country’s annual Body Mass Index (BMI), a measure of obesity. While the number of mentions of sweet snacks was related to higher obesity levels three years later, the number of salty snack mentions was unrelated. The number of vegetable and fruit mentions was connected to lower levels of obesity three years later.“Newspapers are basically crystal balls for obesity,” said coauthor Prof. Brian Wansink, director of the Cornell Food and Brand Lab and author of the book Slim by Design: Mindless Eating Solutions for Everyday Life. “This is consistent with earlier research showing that positive messages – “Eat more vegetables, and you’ll lose weight” – resonate better with the general public than negative messages, such as ‘eat fewer cookies.’”