New worlds: Maneuverability of the octopus 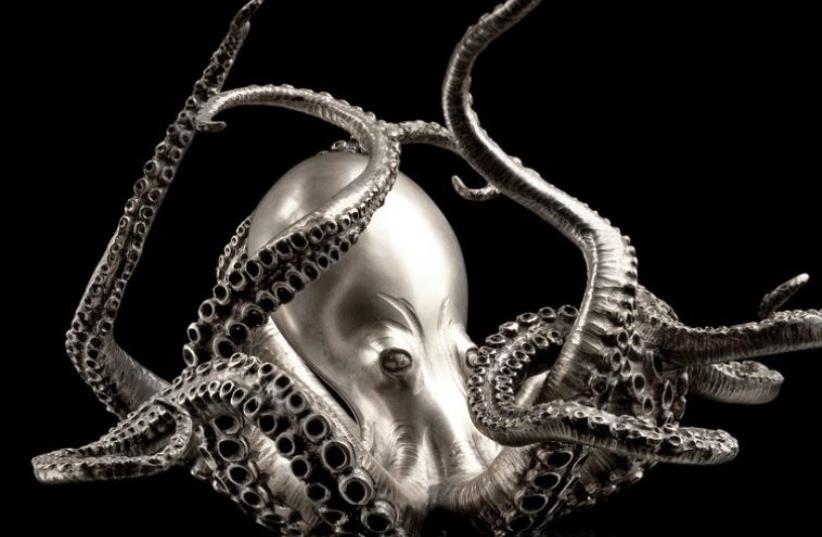 Octopus
(photo credit: INGIMAGE)
Advertisement
Maneuverability of the octopus The octopus is known for having a unique body structure, not least its eight symmetrical and highly flexible arms, but these creatures also possess sophisticated brains to match. Now, Hebrew University researchers have reported the first detailed kinematic analysis of octopus-arm coordination during locomotion. The animals have a unique motor-control strategy to match their odd form, the scientists wrote in a recent issue of the journal Current Biology.“Octopuses use unique locomotion strategies that are different from those found in other animals,” said Prof. Binyamin (Benny) Hochner, principal investigator at HU Octopus Research Group. “This is most likely due to their soft molluscan body that led to the evolution of ‘strange’ morphology, enabling efficient locomotion control without a rigid skeleton.”The team’s earlier studies focused on goal-directed arm movements, like reaching to a target or fetching food to the mouth, Hochner explained. The new study is the first to tackle a larger question – how octopuses manage to coordinate their eight long, flexible arms during locomotion.Octopuses most likely evolved from animals more similar to clams, with a protective outer shell and almost no movement to speak of.“During evolution, octopuses lost their heavy protective shells and became more maneuverable on the one hand, but also more vulnerable on the other hand,” said study co-author Dr. Guy Levy. “Their locomotory abilities evolved to be much faster than those of typical molluscs, probably to compensate for the lack of shell.”The evolution of a typical snail’s foot into long and slender arms gave octopuses extraordinary flexibility. Excellent vision, together with a highly developed and large brain and the ability to use camouflage made cephalopods very successful hunters. But it was not clear how the octopus controls the movements of its remarkable body.After studying frame-by-frame some videos of octopuses in action, the researchers made several surprising discoveries. Despite its bilaterally symmetrical body, the octopus can crawl in any direction relative to its body orientation. The orientation of its body and crawling direction are independently controlled, and its crawling lacks any apparent rhythmical patterns in limb coordination.The HU team showed that this uncommon maneuverability of octopuses comes from the radial symmetry of their arms around the body and the simple mechanism – pushing-by-elongation – by which the arms create the crawling thrust.“These two together enable a mechanism whereby the central controller chooses in a moment-to-moment fashion which arms to recruit for pushing the body in an instantaneous direction,” the researchers write. The animal needs only to choose which arms to activate in order to determine the direction of locomotion.The findings lend support to what’s known as the “embodied organization” concept. In the traditional view, motor-control strategies are devised to fit the body. But, the researchers say, under embodied organization, the control and the body evolve together in lockstep within the context of the environment with which those bodies interact.“This concept, which is borrowed from robotics, argues that the optimal behavior of an autonomous robot or an animal is achieved as a result of the optimization of the reciprocal and dynamical interactions between the brain, body and the constantly changing environment, thus leading to optimal adaptation of the system, as a whole, to its ecological niche,” Levy said.

BEING POSITIVE PAYS OFF Salespeople in many countries always say “have a nice day!” but one can’t be sure that they really mean it. Service workers of all kinds are often taught by employers to hide both their negative and positive feelings when dealing with customers. Even if they’re angry over a customer’s behavior, the salespeople are usually taught not to show it.Now a study by Prof. Dana Yagil of the human services department of the University of Haifa advises people not to show “false feelings” as this practice can harm the employee and even customer satisfaction. It is better, she wrote in the journal Motivation and Emotion, to show one’s “natural feelings” – within reason of course.There is a “price” when employees have to show a fake smile or hide positive feelings, wrote Yagil, who tested 246 service workers of various ages on their positive, negative and neutral feelings towards customers.They were presented with several scenarios and asked to write down their personal reactions. Then they were divided into couples of “service givers” and “customers” to examine connections between holding in positive and negative emotions on the one hand and customer satisfaction on the other.Yagil found that holding in positive feelings created more “discomfort and a lack of authenticity among employees than hiding negative feelings.” But hiding negative ones increased the customers’ satisfaction.She suggested that expressing positive feelings to customers is thus beneficial, contributing to employees’ satisfaction and promoting loyalty among people they serve.
Advertisement
Subscribe for our daily newsletter