The dictionary features some 3,000 photographed symbols, constituting an extensive vocabulary of signs used on a daily basis by the deaf and hard-of-hearing community in Israel. 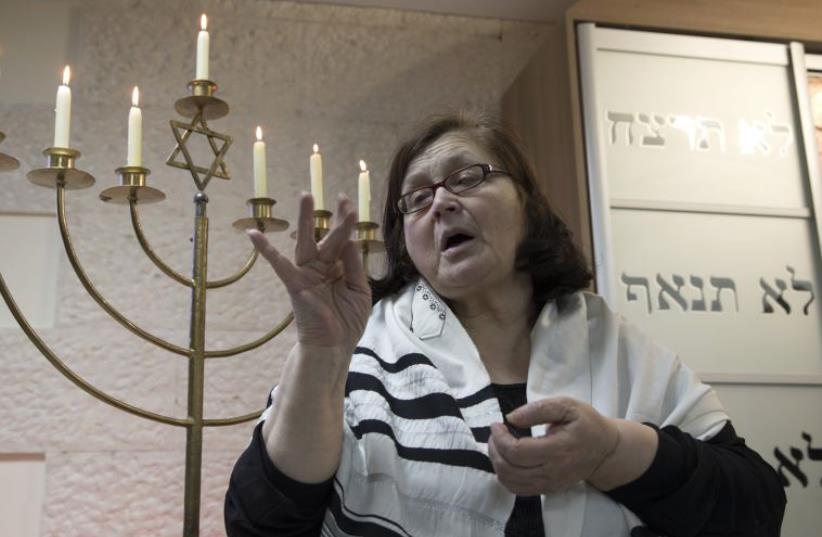 A sign language interpreter translates a prayer during a ceremony on the eve of the International Day of Commemoration to honour the victims of the Holocaust in Minsk
(photo credit: REUTERS)
Advertisement
Do you want to communicate with a deaf person but don’t know how to sign the words with your hands? The Institute for the Advancement of Deaf Persons has just produced a free, innovative and cutting-edge dictionary on the Internet based on the latest technology.The dictionary features some 3,000 photographed symbols, constituting an extensive vocabulary of signs used on a daily basis by the deaf and hard-of-hearing community in Israel.User friendly, it enables you to search for signs by typing words in Hebrew, Arabic, English or Russian. The search bar has an automatic word completion system. Type in a word, and the sign you’re looking for will appear in a video clip. The dictionary was produced thanks to the contributions of Alex Garfeld in memory of the late Prof.Miriam Shlesinger of Bar-Ilan University’s department of translation and interpreting studies who made great contributions to the field before she died three years ago. It can be accessed in English at http://isl.org.il/en/ home-page-2.Knesset speaker MK Yuli Edelstein was the first Israeli to use the site, at a recent ceremony in his office.Israeli sign language (ISL) is a visual-spatial dialect used by the deaf community – a natural, full and complete system expressed through hand, facial and body gestures. This language has a rich lexicon and a complex grammatical structure. According to the Israeli institute, ISL is a relatively young language, about 80 years old. Its sign vocabulary was enriched by the community over the decades, and the signs serve as the foundation the language is based on.“The use of a digital video dictionary is a natural choice for documenting a visual language,” the institute says. A video dictionary provides a full and complete image of each of the signs comprising the sign language.Only a video can portray the dynamic dimension of the sign and illustrate its complete structure: location, hand shape, type of movement, direction of movement, and facial expression.The institute plans to update the dictionary and add more symbols on an ongoing basis.A large team of language, linguistics and technology experts spent much time thinking about the most suitable technology for the dictionary’s production, programming and design. It was ultimately decided to store the dictionary in the “cloud” – using a network of remote servers hosted on the Internet to store, manage and process data, rather than a local server or a personal computer.It began with 2,500 words taken from the institute’s previous Israeli Sign Language Dictionary going back to 2002 whose interface was based on outdated technology. New signs were added which didn’t appear in the previous dictionary, as well as signs for new words such as Skype, Uber and “chat.” The institute invited people from the deaf and hard-of-hearing community to participate in the dictionary as models.(Those who want to sign fluently and professionally should sign up for courses at the institute.)