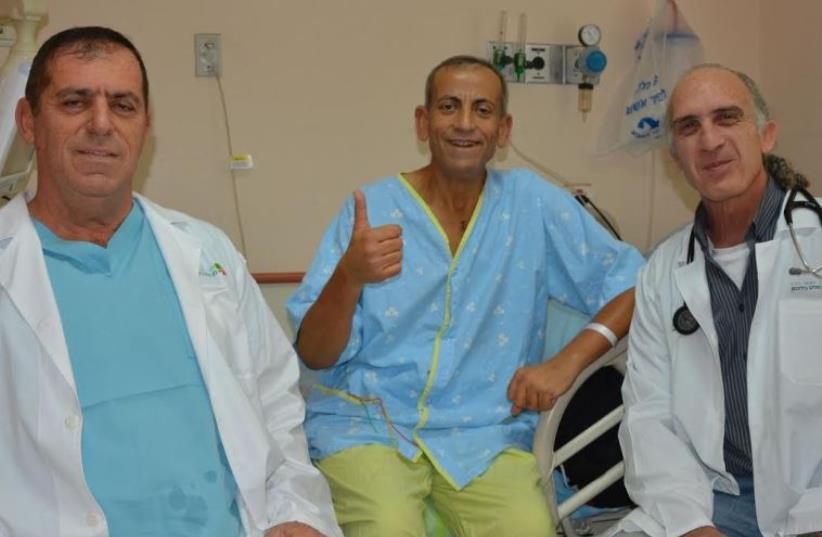 Prof. Aravot (left) and Dr. Ben-Gal (right) with recipient of the Heart Mate 3
(photo credit: Courtesy)
Advertisement
A new type of artificial heart – the Heart Mate 3, which gives the recipient a pulse and blood pressure – has been imported and implanted here for the first time at the Rabin Medical Center- Beilinson in Petah Tikva. The recipient was a 51-year-old man who suffered from severe disturbances in his heart function whose cause was unidentified.The recipient’s condition before the transplant was very poor, with only seven percent of normal function, and he needed to be attached constantly to an oxygen tank.Transplant surgeon Prof. Dan Aravot said the Heart Mate 3 was more technically sophisticated, caused fewer complications, such as blood clots, and creates blood pressure, as does a natural heart. Until now, no artificial hearts were able to create a pulse or blood pressure.Previous artificial hearts operated without a heartbeat, instead producing a continuous flow of blood to the rest of the body, making it impossible to measure blood pressure in the patient.Aravot, who did the transplant along with Dr. Victor Robchevski, said his hospital implants artificial hearts into some 30 patients every year – the highest figure of any hospital in Israel.“Each generation of artificial heart devices moves us toward a goal that will allow patients with serious heart problems to enjoy a good quality of life for many years without complications,” he said.Beilinson cardiologist Dr. Tuvia Ben-Gal added: “This is good news for many patients, as the safety of the new artificial heart will make it possible for use in a wider circle of patients than previously. For many patients with severe heart failure, this is the only solution for saving their lives, given the impossibility of taking hearts from animals.”The transplant was performed in a dramatic, four-hour operation in which they preserved the patient’s own heart alongside the artificial organ. The patient’s right ventricle continues to pump, while the artificial heart will replace the function of his sickly left ventricle. It can be used as a permanent replacement or a “bridge” device until his own heart recovers or he can get a biological heart for transplant, the doctors said.Asked to comment, Jerusalem’s Shaare Zedek Medical Center’s chief of cardiology Prof. Giora Weiss welcomed the introduction of the new model of artificial heart, saying it was a “new-generation device that makes important progress. It’s nice that it is being offered to Israeli patients.”