If you are sensitive to swimmer’s ear, use a combination of ear plugs and alcohol to clean the inner canal. 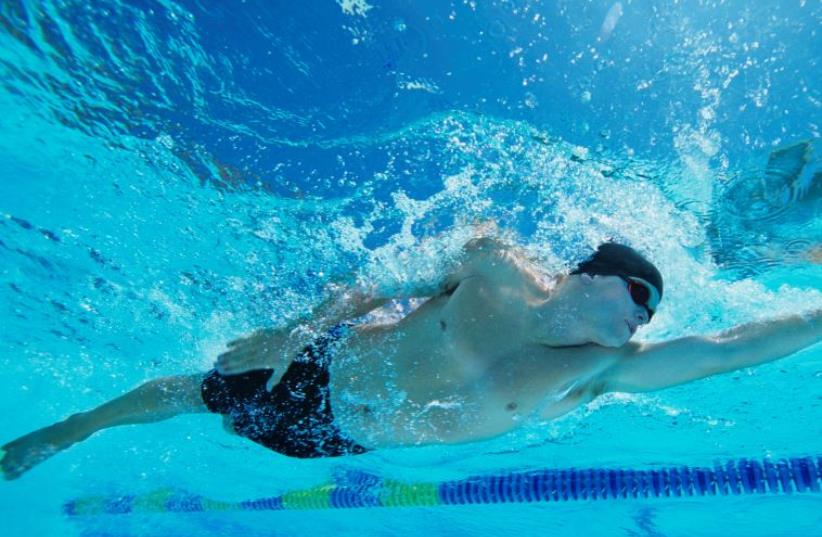 Swimming
(photo credit: INGIMAGE)
Advertisement
I am a 24-year-old man who loves to swim in the pool near my home. But I suffer from itchy and annoying chronic infections in my ear – swimmer’s ear, I suppose it is called – that keep returning, even though I wear earplugs when I’m in the water.Could it be that the bacteria reach my ear through my nose? I don’t understand why there are bacteria in the water that cause my infections if the water is chlorinated. Is there a good way to treat this condition or – even better – to prevent it? — P.T., Tel Aviv
Dr. Netta Gatt of the otolaryngology department of Jerusalem’s Shaare Zedek Medical Center, answers: There are individuals whose ears are sensitive to being exposed to water. In these cases, it is recommended to use good ear plugs and/or alcohol.
A popular and effective commercial product with alcohol is called Dry Ears. It dries up water in the ear canal. The alcohol also changes the acidity in the ear and thus prevents infections. However, it is prohibited to use it if there is a hole in the ear drum. In such cases, one can use a hairdryer that is not too hot to dry out the ear canal. The dryer can also be used, if you prefer, even if there is no hole in the ear drum, as it prevents infections and itching.
I am a 29-year-old woman. I went on a diet for four months and lost more than 10 kilos. I still ate protein in the form of fish, chicken and meat, but maybe I have not been drinking as much water as I should. I have found that since I lost the weight, my fingernails have become fragile and break, but my toenails have not. Whenever I go to get a manicure, they refuse to do my fingernails but agree to do my toenails. The manicurists say my fingernails are so fragile, they won’t hold up under the chemicals they use. What is missing? Could it be that I don’t drink enough water? But if so, why are the toenails okay and the fingernails not? — A.N., Jerusalem Prof. Eli Sprecher, head of dermatology at Tel Aviv Sourasky Medical Center, replies: Nail brittleness has many causes, among which nutritional deficiencies rank among the most common ones. It is possible that the harsh diet regime you mention in your letter is related to your complaint. But of course, it might not be, and other causes should be ruled out as well. I suggest you consult with a dermatologist who will perform a thorough discussion with you to identify possible causes and will be able to recommend an appropriate laboratory workup. It could be that there is delay between the fingernails and toenails due to different growth rates; toenails grow much more slowly than fingernails.Veteran Jerusalem dermatologist Dr. Julian Schamroth adds: The nails are made up mainly of a protein called keratin, as well as very small amounts of minerals. A balanced diet will contribute to healthy-looking nails. A severe lack of vitamin A, vitamin D or calcium can cause dry and brittle nails, and a deficiency of folic acid or vitamin C may cause hangnails. A deficiency of iron may be responsible for indented or spoon-shaped nails. However, in all these cases, the nail changes result from severe dietary deficiencies of these substances. Also, bear in mind that the nail plate – the part that is visible – is dead tissue; all nail growth is taking place in the nail bed, where the nail is “alive” and developing. It thus takes a long time for the developing nail to grow out, so any nail changes due to a deficiency of these substances would have to be not only severe, but also prolonged. Brittle nails are far more likely to be due to fungal infections, excessive washing, exposure to soaps and detergents or topically applied substances such as acrylic glue for artificial nails.I suggest that you consult with a dermatologist to determine the most likely cause. A “crash diet” would be at the bottom of the list of possible causes. It is possible, but one would expect toenails to show some mild changes near the proximal nail fold. I would guess that you – who by your own admission go to a manicurist – have acrylic contact dermatitis on your nails.
Rx for Readers welcomes queries from readers about medical problems. Experts will answer those we find most interesting. Write Rx for Readers, The Jerusalem Post, POB 81, Jerusalem 9100002, fax your question to Judy Siegel-Itzkovich at (02) 538-9527, or email it to jsiegel@jpost.com, giving your initials, age and place of residence.
Advertisement
Subscribe for our daily newsletter