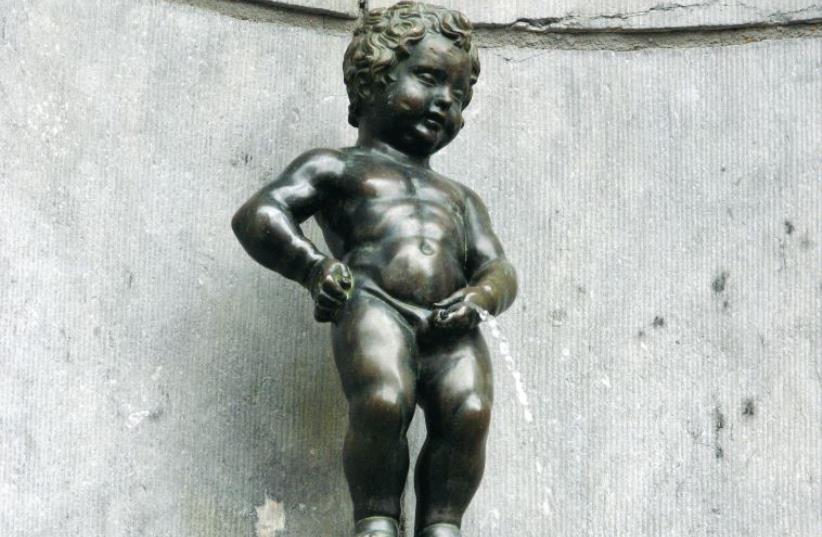 Statue.
(photo credit: Wikimedia Commons)
Advertisement
I am 64-year-old man who suffers from benign prostate hyperplasia (BPH, or the non-cancerous enlargement of the prostate) that causes me to urinate a lot, especially at night. I am taking saw palmetto pills recommended by a friend, but it has not helped. I don’t want surgery. Are there any other pills or treatments that shrink the prostate? -A.N., Netanya Prof. Ofer Shenfeld, head of the urology department at Jerusalem’s Shaare Zedek Medical Center, replies: BPH is a very common condition in men and becomes more so as they get older. It is one of the 10 most common diseases in American men older than 50, and among their Israeli counterparts as well. It is caused by proliferation of cellular elements of the prostate, resulting in chronic bladder obstruction. The condition may lead to the retention of urine, insufficiency of the kidneys, recurrent urinary-tract infections, blood in the urine and stones in the bladder.The benign growth of these cells begins as early as age 30. Half of all men have evidence of BPH in their tissue by the time they reach 50, and 75 percent by age 80. The condition bothers many men, causing frequent urination, urgency to urinate, difficulty initiating the urinary stream, an interrupted, weak stream, the inability to completely empty out the bladder and the feeling that it never empties out fully, straining to initiate and maintain urination, a weaker- than-normal stream and dribbling of small amounts of urine between visits to the bathroom.BPH is diagnosed by a digital rectal examination and assessment of symptoms, and prostate cancer has to be ruled out before it is treated. It does not, however, lead to prostate cancer or to a higher risk of the cancer.Saw palmetto is a plant that is widely taken in the US for benign prostate hyperplasia, but much less in Israel. Small clinical studies have shown that it may bring some relief, but others have not shown it to be better than a placebo, and its efficacy has not been proven in serious and large studies. Several prescription drugs have been proven to alleviate the condition, and they can be taken alone or several together to alleviate the condition.Among the classes of drugs are alpha blockers, which relax the muscle in the prostate to improve flow. These may be accompanied by side effects including tiredness, headaches and a lowering of blood pressure. The newer prescription drugs in this class are less likely to cause such side effects, only about 5% to 10% of patients who take them.Another one is 5-alpha reductase inhibitors, which help shrink the prostate.This class of drugs may reduce the amount of sperm produced and cause a decline in libido.Taking drugs from both classes can reduce by 30% the eventual need to undergo transurethral resection of the prostate (surgery) for BPH. I myself perform surgery to cut out the tissue that interferes with the flow of urine.There are other drugs and some minimally invasive treatments for BPH.Since frequent urination can be involved in other conditions, men who are suffering should go to a urologist for examination and diagnosis.I am a 55-year-old woman who has had type-II diabetes for five years. I have noticed recently that the hair on my head has been thinning, and it also grows more slowly on my legs and underarms so I have to shave less often. I heard that diabetes can affect hair growth. Is this true? What is the mechanism for this, and can anything be done?  -V.C., Hod Hasharon Prof. Julio Wainstein, a senior diabetologist at Wolfson Medical Center in Holon, answers: Diabetes can cause all kinds of problems, some more common and others less common. Sugar is the source of energy in the body, and all the biochemical processes requires accessible glucose.Every tissue and cell needs glucose.A diabetic, especially if the sugar/insulin is not balanced, may suffer from reduced hair growth in various parts of the body, even though it is not very common. There isn’t anything one can do about it. In any case, some people would be pleased to have hair stop growing on one’s legs and underarms (but not on their scalp), so enjoy it.

Rx for Readers welcomes queries from readers about medical problems. Experts will answer those we find most interesting.Write Rx for Readers, The Jerusalem Post, POB 81, Jerusalem 9100002, fax your question to Judy Siegel-Itzkovich at (02) 538-9527, or email it to jsiegel@jpost.com, giving your initials, age and place of residence.