Tehina, humus and eggplant with tehina salads under several brands found to have Salmonella in raw materials; products recalled. 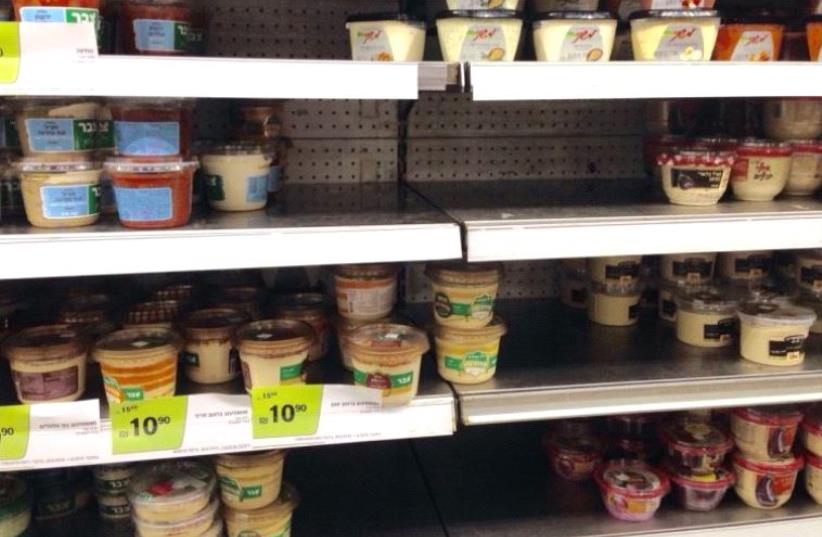 Missing salads in the supermarkets, Thursday, July 11, 2016.
(photo credit: AVSHALOM SHOSHANI)
Advertisement
The Shamir company announced a recall of tons of their packaged salad products over suspected salmonella contamination from a tehina supplier. The Hanasich tehina company, whose manufacturing license has been temporarily suspended, produced the tainted raw materials.The affected salads were the hummus, tehina and eggplant in tehina products under the brands Shamir, Shufersal, Yesh, Asli, Hamutag, Delicatessen, Salatei Habayit, Yohananof and Picnic brand names. The affected hummus carries expiration dates of September 1 to September 18, 2016; tehina with expiration dates from September 6 to October 3; and eggplant in tehina with expiration dates from September 1 to September 18. Anyone with such products should not eat them, instead, they should call the customer service number at 03-906-7744.The Shamir Salads company apologized for what happened even though it was “blameless” and said it was collecting the affected salads from store shelves, the company’s CEO said.The Health Ministry said Thursday evening that it plans to file an administrative appeal against Hanasich over the contamination, which caused a “risk of harm to public health.”“We invited the company to a hearing and did not review their production license, which expired yesterday,” said Prof. Itamar Grotto, associate director-general of the Health Ministry. The ministry claimed Hanasich did not immediately report the contamination. Instead, it only came to light after tests by Strauss and Tzabar – two other hummus producers – uncovered the salmonella.Strauss and Tzabar discovered the salmonella before using it in their products.Meanwhile, Globes reported Thursday that frozen vegetable provider Milotal has recalled their frozen potatoes over a Listeria contamination.The affected products are the Mehadrin family French fries 2 kg. bag with a July 25, 2017 expiration date, Crispy family potato chips 2.5 kg bag with a July 27, 2017 expiration date, American Potato Chips sold in a 2.5 kg. bag with a July 26, 2017 expiration date and Family potato chips in an 800 gram bag expiring July 28, 2017.MK Karin Elharar, head of the Knesset State Control Committee, said Thursday that, due to the shortage of inspectors, the ministry depends on tests carried out by labs paid for by the food companies. But the ministry said it nevertheless “carries out 13,000 surprise food checks of 3,000 products in factories each year.”Elharar complained that by law, companies do not have to report on pathogens in food if they have not left the factories.She called for a change in the law that would require them to report to the ministry in real time.Last week Telma and its mother company, Unilever, were embroiled in a similar controversy over salmonella-tainted cornflakes.While Unilever originally stated that its infected cornflakes had “not left the factory,” they later admitted that the products had hit supermarket shelves. As a result, the public has lost faith in the firm, and Telma’s cornflakes sales have plummeted.

Maariv staff contributed to this report.
Advertisement
Subscribe for our daily newsletter