Bilateral deal is the first between the Israeli and US space agencies since a 1996 agreement expired in 2005. 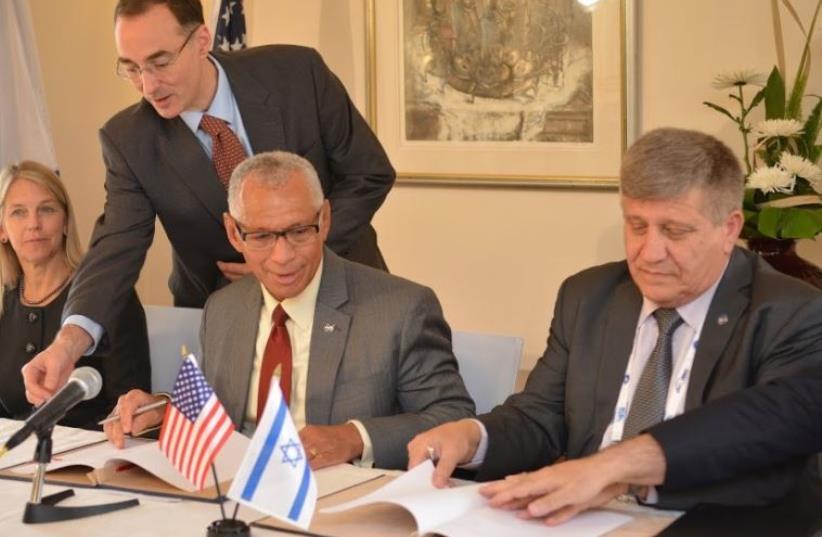 NASA Administrator Charles Bolden (left) and Israel Space Agency director Menachem Kidron sign a cooperation agreement in Jerusalem
(photo credit: ISRAEL BEN-ELI)
Advertisement
The Israel Space Agency (ISA) and NASA propelled ahead in the sector of civil space exploration on Tuesday with the signing of a broad new bilateral agreement.The deal, signed amid the International Astronautical Congress in Jerusalem, could possibly lead to Israeli contributions to a future Mars endeavor. The agreement was the first signed between the Israeli and US space agencies since a 1996 agreement expired in 2005. NASA Administrator Charles Bolden lauded the move as "bigger and better" than past collaborations. "You are known for innovation and technology and this agreement gives us the opportunity to cooperate with Israel on the journey to Mars, as we open up new opportunities for all of our children," he said. ISA Director Menachem Kidron also welcome the agreement, assuring that "both sides intend to implement it by working together on research and technology projects."Under the agreement, the ISA and NASA will operate to research space technology for the benefit of humankind.Among the components of cooperation possible under the deal are the exchange of personnel and scientific data, rocket research, joint missions, ground-based research facilities, scientific instrumentation, workshops and conferences, spacecraft, scientific communication and space education. Tuesday's agreement came after a number of recent advancements for both space agencies. Last week NASA announced evidence of the presence of water on the Red Planet. Also last Wednesday, Israeli nonprofit SpaceIL became the first team competing in Google’s international Lunar XPRIZE moon-landing competition.