Tower for promoting applied medical research to be built

The unusual partnership brings together a major hospital and academic center to stimulate and advance applied medical research. 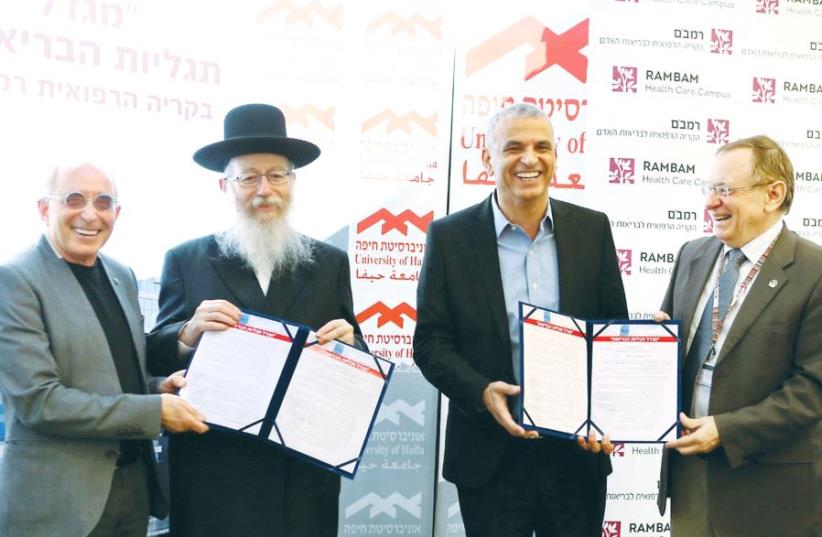 AT THE cornerstone-laying ceremony for the Medical Discovery Tower in Haifa yesterday are (from left) Haifa University president Prof. Ron Rubin, Health Minister Ya’acov Litzman, Finance Minister Moshe Kahlon and Rambam Medical Center director-general Prof. Rafael Beyar.
(photo credit: COURTESY OF RAMBAM MEDICAL CENTER)
Advertisement
A tower for medical research will be built by Rambam Medical Center and the University of Haifa at a joint cost of NIS 400 million, it was announced on Wednesday at a ceremony attended by Finance Minister Moshe Kahlon and Health Minister Ya’acov Litzman.The unusual partnership brings together a major hospital and academic center to stimulate and advance applied medical research. It is the first time in which a major Israeli medical center and university set up a partnership for this purpose. The 20-story tower, each floor with 1,370 square meters, will be located on the Rambam campus in Haifa.The two institutions will raise money as a joint venture between Rambam and the university’s faculty of natural sciences and other fields connected to the medical field, as well as the Technion’s laboratories, technological incubators and other research bodies.The research activity in the Medical Discovery Tower will offer a close connection between the clinical field and research and development, said Rambam director-general Prof. Rafael Beyar. It will also link the university researchers with the necessary clinical resources, such as imaging devices, genetic testing and the advanced equipment system currently in the hospital compound. This will lead to a significant shortening of the time required for achieving innovation in the life sciences industry.“The signing of the agreement is another step in the expansion of the University of Haifa – both in terms of research and physical aspects – and its transformation into a multi-campus university that further strengthens our work in the social fabric of Haifa and the North,” said university president Prof. Ron Rubin.