Blood pressure is affected by genetic and environmental components, such as nutrition and physical activity. 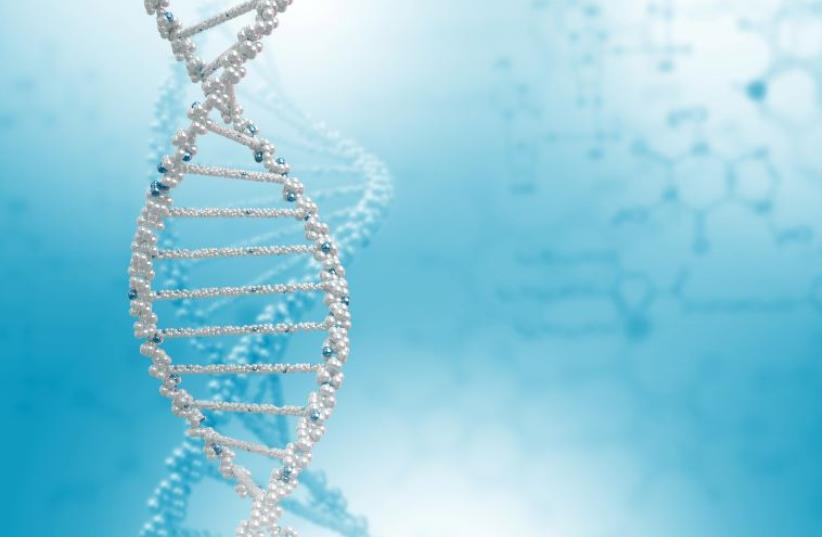 DNA structure [Illustrative]
(photo credit: INIMAGE)
Advertisement
Variation in a specific gene affect blood pressure values, according to a new study led by Prof. Ruth Birk, dean of the faculty of health sciences at Ariel University, whose findings are regarded as significant for the treatment of hypertension in the new field of personalized medicine.A research group she headed showed that genetic variation among individuals in the gene called MTHFR (a key enzyme that creates nucleic acid in the human body) significantly affected diastolic blood pressure (the lower value measurement of blood pressure) in humans.Birk’s research was published recently in the American Journal of Hypertension.Blood pressure is affected by genetic and environmental components, such as nutrition and physical activity, she said.High blood pressure occurs most commonly among older people (affecting about a third of the world’s adult population) and is especially risky in pregnant women. It is also a major risk factor in the development and worsening of heart disease, stroke and kidney disease.The Ariel University study tested computational tools and statistical relationship between genetic variations between people and between blood pressure and blood fat levels. The researchers found that there is a significant correlation between MTHFR genetic diversity and diastolic blood pressure levels (the lowest value in the measurement of blood pressure), without any connection to blood lipid (fat) levels; it is by itself a risk factor.The study found that when genetic variation in MTHFR appears in both copies of a gene (about a fifth of the population), it significantly increases the average diastolic blood pressure by eight mmHg units.When the change is only one of the two copies of the gene (heterozygous), the average diastolic blood pressure by 3.5 mmHg units.This is the first study demonstrating that genetic variation in MTHFR leads to a specific change in diastolic blood pressure, said Birk. The study shows the quantitative effect on blood pressure that is independent of other factors.“The research results are of great importance in the detection and diagnosis of people at risk of hypertension,” she continued, “and will lead to effective and personalized treatment for it according to the patient’s genetic information.”