Watch out for Purim pitfalls

Any injury from caps or burning costumes should be washed in cool water and bandaged until the victim can receive medical attention. 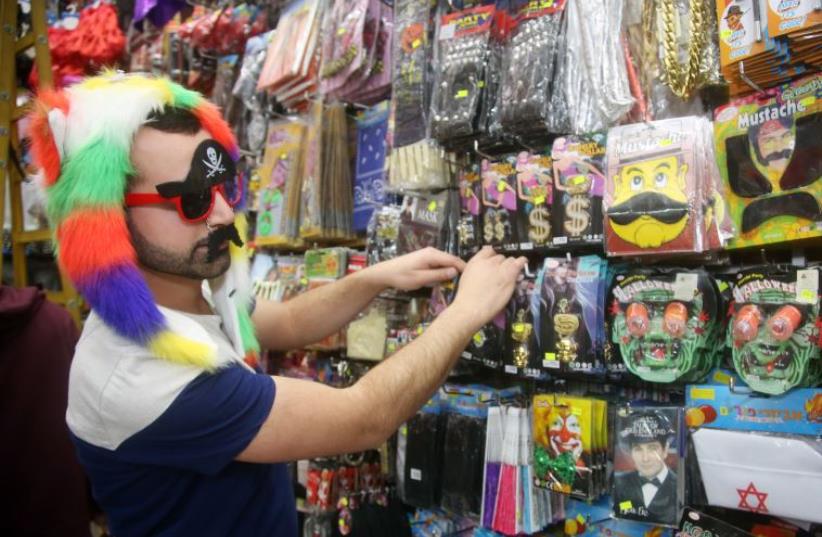 Store sells costumes for Purim
(photo credit: MARC ISRAEL SELLEM)
Advertisement
Burns from explosive devices and costumes set afire, skin rashes from unlicensed makeup, overeating, road accidents from excessive drinking and damage to ears from cap guns and to eyes from sprays and foams are just some of the dangers posed by the holiday of Purim.The Jewish holiday marks the saving of the Jewish people from Haman, who plotted kill all the Jews in the ancient Persian Empire. It will be observed on Saturday night and Sunday in most of the country and on Sunday night and Monday in ancient walled cities, including Jerusalem, Acre and Hebron.Schneider Children’s Medical Center in Petah Tikva advised parents to be careful about the purchase and use of Purim costumes, especially those for children. The medical center urged caution in making sure the costumes are fire resistant; in the case of homemade costumes, it should be ensured that they are not dangerous and do not include feathers, paper, carton, plastic wrap or cotton wool, all of which can easily catch fire.Costumes with long strings, laces or ropes that could get wrapped around necks and cause strangulation should be avoided. Accessories for make-believe soldiers and other combatants should be soft, and masks should not obstruct vision or prevent proper breathing. Purim makeup must be approved by the Health Ministry.Prof. Yehezkel Weisman, head of the center’s emergency department, said that many children are injured before, during and after Purim festivities. Some are injured by cap guns exploding in their faces or in their pockets, while others choke on small candies and nuts. Children under the age of seven should not be allowed to eat small, hard bits of food, and small toys that could be swallowed by young children should not be included in goody-bags or other gift parcels.Any injury from caps or burning costumes should be washed in cool water and bandaged until the victim can receive medical attention.Dafna Ziv-Bosani, a clinical dietitian at Schneider, said children are liable to gorge for days on gift parcels of sweets instead of regular food. Parents should limit their consumption and explain the importance of a balanced diet for their physical and dental health. Sweets with artificial coloring and a lot of sugar in particular should be avoided.While it is a commandment to get drunk on Purim, this can lead to loss of consciousness, violence, serious accidents and even death. People of all ages should be careful not to become inebriated and should not drive while drunk.The endocrinology department at Ziv Medical Center in Safed warned diabetics to avoid drinking alcohol excessively, as it hinders the process in which glucose is produced in the liver. Drinking without eating can cause hypoglycemia (low blood sugar) within 15 minutes, potentially causing serious or even life-threatening complications.Dr. Orna Deli-Gottfried, head of the juvenile diabetes unit at the hospital, recommended that all diabetics refrain from drinking alcohol on Purim, despite the temptation, as well as throughout the rest of the year. “Drink water instead. Enjoy your costumes and parties, but take care of yourself,” she said.Magen David Adom advised that if a person vomits, he or she should be turned on their side. They also should not be allowed to drink coffee or any other liquid, because a loss of reflexes may cause them to inhale the liquid into their lungs and choke.Bottles of liquor should not be left unattended at parties, as someone could add chemicals or drugs to them when no one is watching.