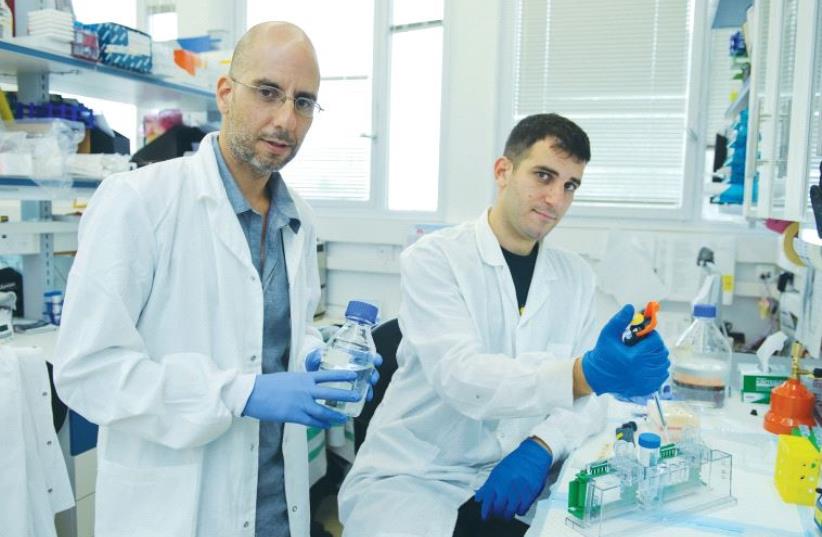 DR. GAD ASHER (left) stands alongside a colleague at the Weizmann Institute of Science in Rehovot.
(photo credit: WEIZMANN INSTITUTE OF SCIENCE)
Advertisement
Cycles of oxygen can reset biological clocks, at least in mice, according to research at the Weizmann Institute of Science just been published in the journal Cell Metabolism. If the same effects are confirmed in humans the finding could, among other things, help airlines moderate cabin air pressure to reduce jet lag and, perhaps, even sleep disorders.Lead author Dr. Gad Asher, a senior scientist at the Rehovot institute, and his postdoctoral fellows Yaarit Adamovich and Benjamin Ladeuix, with help from researchers at the University of Bristol, wanted to know if oxygen might cue circadian rhythms, or “biological clocks.” They first found that body oxygen levels vary throughout the day and peak during the activity phase – when animals are active and ingest food – and bottom out during the resting phase.Just altering surrounding oxygen levels did not change the rodents’ circadian rhythms, but once the mice experienced a six-hour jump ahead in daylight hours, they found that varying oxygen levels could help them more quickly adapt their eating, sleeping and running habits to the new time.Aside from what they know so far – that light, food and temperature are the best cues in influencing circadian rhythms – scientists continue to wonder what drives our biological clocks.The Rehovot researchers proved that changing the concentration of oxygen in cells by just three percent twice a day synchronizes mouse cells to a circadian rhythm.Understanding how oxygen influences the circadian clock goes beyond jet lag. Cardiovascular disease, chronic obstructive pulmonary disease, sleep disorders due to shift work, along with other common health problems, can cause low oxygen levels in body tissues.“We show that oxygen works in mammals, specifically rodents, but it will be interesting to test whether oxygen can reset the clock of bacteria, plants, flies and additional organisms,” Asher said.They suspected HIF1alpha – hypoxia-inducible factor 1-alpha – was the link between oxygen and the circadian clock because it plays a role regulating oxygen in cells.They found that cells with low HIF1alpha levels won’t synchronize in response to oxygen variations.HIF1 alpha, a basic helixloop helix that contains protein, is considered the master regulator of cellular and developmental response to a lack of oxygen in the tissues, or hypoxia.“It was extremely exciting to see that even small changes in oxygen levels were sufficient to efficiently reset the circadian clock,” said Asher.“The study actually raises a lot of important questions.Although we show that ‘clock-reset’ by oxygen is dependent on HIF1alpha, we did not yet fully identify how HIF1alpha integrates within the core clock circuitry.”The researchers further explored oxygen’s effect on circadian rhythms with experiments in jet lag. Just like humans, mice are prone to jet lag after a sudden shift in daylight hours. Mice were first left to eat, sleep and run on their wheels in air-controlled environments. Researchers found that a small drop in oxygen levels 12 hours before the six-hour daylight shift, or two hours afterwards, put the mice back on their circadian schedules faster and that this too was dependent on HIF1alpha levels.Today, commercial airliners pressurize cabins to the same air density of a city with an altitude of 6,000 to 8,000 feet above sea level. This low-pressure reduces ordinary damage from use of planes, but enough passengers suffer from airsickness in response to this drop in oxygen levels that some airlines are considering ways to increase that pressure on flights.In fact, for this reason Boeing designed its new 787 Dreamliner so it can be pressurized to the equivalent of lower altitudes. Following the Weizmann findings, the researchers noted passengers may feel better with higher pressurized cabins. However, they may also lose an advantage in recovering from jet lag.In light of the effects of lower oxygen levels, the researchers now want to see what higher oxygen levels may do to the circadian clock.“We are very looking forward to seeing the outcome of these experiments. It will be interesting both from basic science and also from a practical standpoint,” said Asher.“I believe passengers might be more enthusiastic to inhale oxygen-enriched air to alleviate jet lag in contrast to low oxygen.”