The 10 Israeli participants were the finalists in the Young Scientists Competition, which took place at Jerusalem’s Bloomfield Science Museum in March. 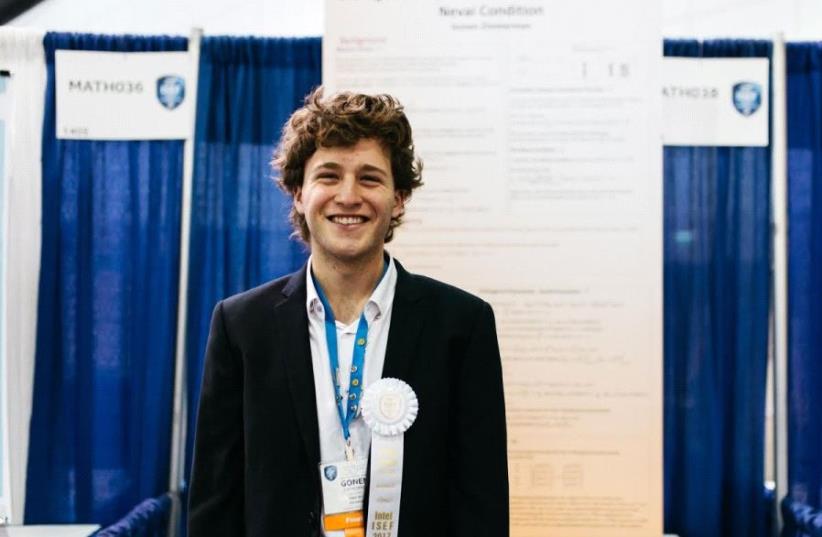 Gonen Zimmerman wins third place prize at the Intel ISEF Young Scientists Competition in Los Angeles
(photo credit: IDAN VAKNIN)
Advertisement
Israeli teens competing against 1,800 peers in 75 countries came out with impressive honors on Saturday night at the international Intel ISEF Young Scientists Competition in Los Angeles. One of the 10 Israelis competing received third prize, while another won an honorable mention.Gonen Zimmerman  of the Levi Eshkol School in Ramat Hasharon School took third place for his research on “Orthonormal Polynomials with the Two-Dimensional Nevai Condition.”  Zimmerman studied in a special program at the Hebrew University. He also received a $1,000 prize and honorable mention in a special ceremony held by the American Mathematical Society.Zimmerman explained the abstruse subject by saying: “This is an open question in mathematics whose solution has great importance for mathematics and physics.”In addition, Na’ama Schor of the High School for Environmental Education at the Sde Boker Midrasha received an honorable mention from the American Physiological Association for her research on “The Morality of ‘Larks’ and ‘Owls’: The Relationship between the Circadian Clock and Morality in Decision-Making.”The 10 Israeli participants were the finalists in the Young Scientists Competition held for the 20th time at Jerusalem’s Bloomfield Science Museum in March.The world competition is part of the research and development program of the European Union to encourage cooperation among young scientists In Europe and Israel and Intel-ISEF in the US. The Israeli competition is supported by the Goren-Monte-Ferrari Family in Italy via the Jerusalem Foundation and the Education Ministry.