The Jewish state and the California city are set for November signing of deal on collaboration in water conservation, technology and cyber security. 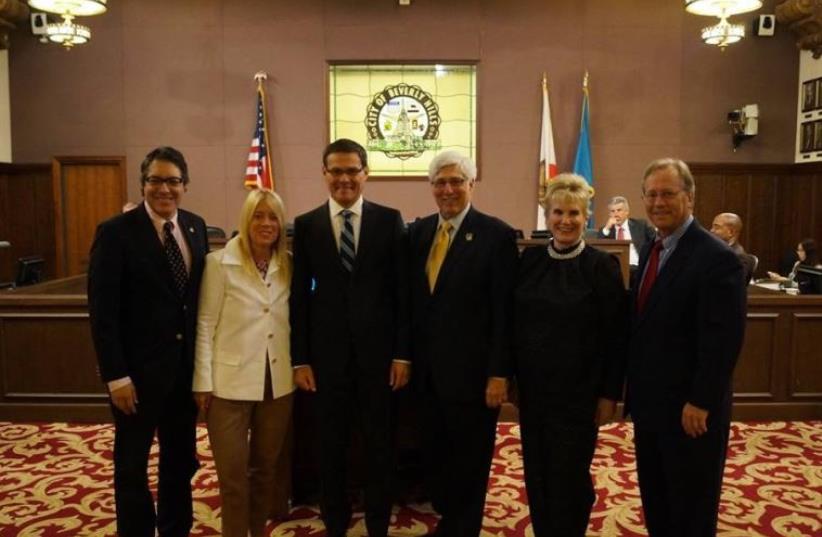 Israel-Beverly Hills partnership adoption meeting
(photo credit: FACEBOOK ISRAEL CONSULATE GENERAL IN LOS ANGELES)
Advertisement
The stars are aligning: Israel's blue-and-white Star of David and a California city home to Hollywood stars, that is. Israel and the Beverly Hills City Council are set to hold an official signing ceremony on November 10 of a declaration that formally establishes a partnership between the Jewish state and the city in Los Angeles County.Following the deal's September 1 ratification, the signing event is due to take place at the Wallis Annenberg Center for the Performing Arts in Beverly Hills. The agreement pertains to exchanges in the fields of water conservation and management, technology and cyber security. “We look forward to working with the City of Beverly Hills to share best practices, ideas and solutions aimed at increasing water conservation and innovation as we face California’s drought as well as Israel’s water challenges,” said David Siegel, Israel's consul general to the Southwest United States.Israeli water experts this summer headed to California to assist the drought-ridden state.Beverly Hills Mayor Julian Gold also lauded the partnership, saying his city "will greatly benefit from Israel’s leadership in many areas that are of great concern and interest to our community.”Under the deal, Israel and Beverly Hills also plan to coordinate in issues regarding education, public health, emergency services, disaster preparedness, public safety, counter terrorism and art and culture.According to Israel's Consulate General in Los Angeles, the joint agreement also seeks to encourage the strengthening of the already-existing sister city program between Beverly Hills and Herzliya.The Israel Philharmonic Orchestra is slated to perform at the gala event encompassing the signing ceremony.