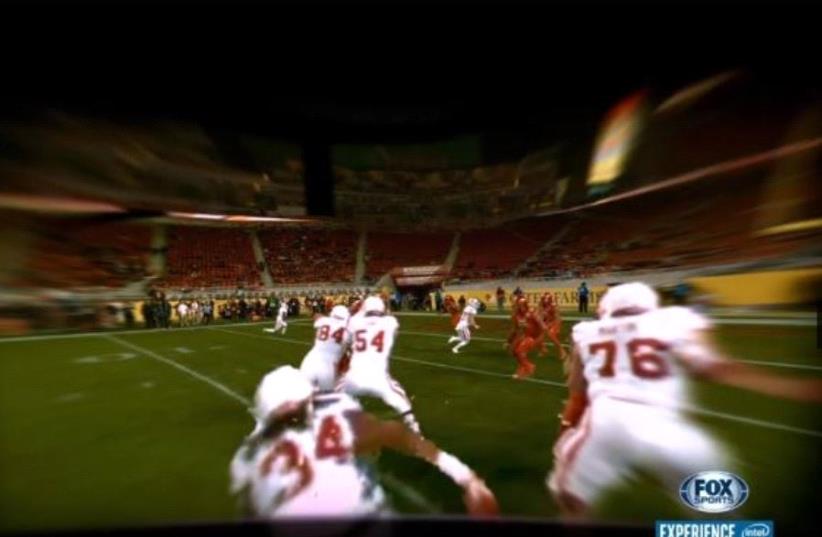 'Be the player' technology
(photo credit: INTEL)
Advertisement
As New England Patriots and Atlanta Falcons fans gritted their teeth on Sunday night during the first Super Bowl to end in overtime, they could connect closer than ever to their favorite teams through an innovative Israeli technology.While watching the game on their TV screens, fans were able to “Be the Player” – experiencing first-downs and fumbles from the players’ point of view through Intel’s 360 Replay, developed in Israel. At the game in Houston, 38 cameras were installed throughout the stadium, generating “immersive experiences” for viewers without requiring players to wear devices on their facemasks or jerseys.“This technology is absolutely changing the game,” said Intel’s sports group general manager James Carwana, in a video press release prior to the Super Bowl. “Fans are going to be able to watch the game not just from the sidelines, but from the center of the field. It’s an incredible medium that creates amazing new sports experiences.”Be the Player is based on the free-D feature developed by the Israeli company Replay Technologies, which was acquired by Intel last March.The 38 individual 5K cameras – devices with a resolution of 5,000 pixels – were installed all around the stadium, streaming live to an Intel server on site, explained Jeff Hopper, Intel’s general manager for immersive experiences, also in the video. The data are then processed in real-time to produce the Be the Player clips.“Think of it as a big cloud of data of everything that goes on the field, and that you’re able to go into that cloud of data and see from any angle what you want to see,” Hopper said.By digitizing the entire arena, the Intel technology creates a “three-dimensional voxel” – or cube – instead of a two-dimensional pixel, according to Carwana.The system produces 15- to 30-second replays aired during live broadcasts that each require about 1 terabyte of data and are available from about a minute to a minute-and-a-half from the moment they occur on the field, according to Intel.The result is a virtual reality service that FOX Sports, which broadcast the game, described as a video game-like experience.“We tasked Intel to push their amazing Intel 360 Replay technology to the limit of what it could do, using their array of cameras circling the stadium to synthesize a player’s view on the field,” Michael Davies, FOX Sports senior vice president of field and technical operations said in a statement in mid-January.“The cameras, backed up by a huge bank of Intel computing power, allow a moment to be recreated in 3D space, so that a ‘virtual camera’ can be placed at the player’s eye line – not unlike how limitless camera views can be created in video games.”Ahead of the Super Bowl, Intel published a commercial featuring Patriots quarterback Tom Brady with the tagline: “Intel 360 Replay makes anything look epic – literally anything.”The ad showed Brady and his dog waking up, after which the quarterback performed a series of mundane activities like yawning, brushing his teeth, flipping pancakes and eating – all from a variety of very detailed perspectives.“Wait till you see it in the game,” the ad concludes, with a final glimpse of Brady on his way to the toilet, magazine in hand.The 360 Replay technology was initially showcased at the 2016 NBA All-Star Weekend, creating a seamless 3-D video rendering of the court using 28 ultra high-definition cameras positioned around the arena and connected to Intel servers, the company said at the time.The system enabled broadcasters to give fans a 360-degree view of key plays, such as slam dunks, blocks and steals.“Sports for decades has been delivered to fans in the same way – you’ve got one broadcast going out and it goes to millions and millions and millions of people,” Carwana said. “It’s a beautiful production, but it’s not my production. There’s an opportunity now to personalize the experience of a sport.”