Kahlon says Israel has a real estate bubble, and it will burst 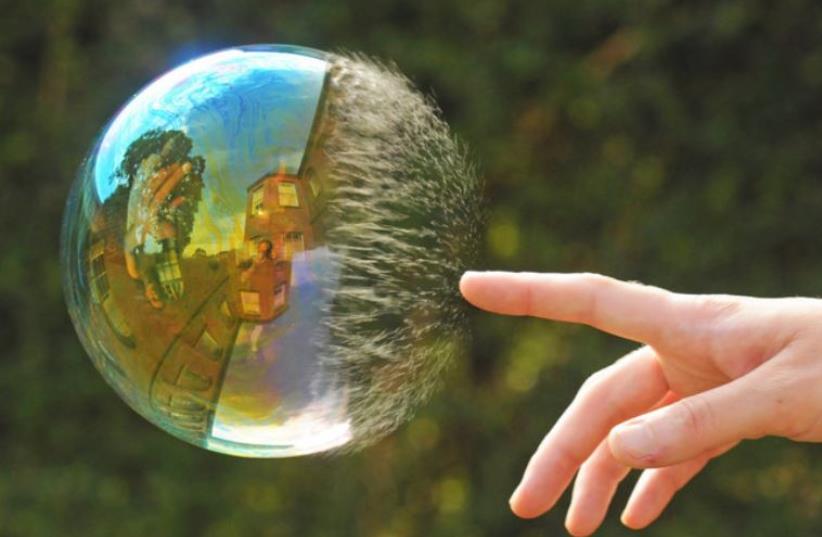 Bursting the bubble
(photo credit: EBAUM'S WORLD)
Advertisement
Finance Minister Moshe Kahlon took the unexpected step of declaring that the real estate market is in a bubble, and that it will burst.“There’s a bubble here. There’s a bubble, and the more I get into it and the more we work on it, we are identifying it. A bubble that was inflated by contractors, inflated by developers, inflated by banks, and a bubble that will burst in the end,” Kahlon said in a Channel 10 interview Wednesday evening.Kahlon wouldn’t be the first to say that Israel’s real estate prices could be characterized as a bubble.The Bank of Israel regularly warns that one of the main threats to Israel’s financial stability come from its housing market, and in 2014, an IMF report found that home prices were about 25 percent higher than their fundamental value justified.Rather, it was Kahlon’s use of the term “burst” that was unusual.Asset bubbles, in which prices become significantly overvalued, can either deflate, coming down slowly toward their fundamental value, or burst, creating a sudden shock.The IMF report said the difference between the two would be significant for Israel.“A slow correction would allow the economy to escape a recessionary episode, but economic prospects would be weak for a prolonged period of time.By contrast, a rapid adjustment would lead the economy into recession, with consumption and output recovering two years after the shock,” it said. It only estimated the chances of a bust, defined as 10 percent drop in a year, at about one in five at the time.Yet Kahlon insisted on the terminology, saying repeatedly that the bubble would burst and that investors would “jump from the roofs,” though he tried to walk back the imagery somewhat, saying they would be low roofs.“I think this bubble will burst, and I can’t tell you how much, but there’s no reason in the world. There’s no shortage of apartments. Today, today as I sit here with you, there are 30,000 apartments in contractor inventory that still haven’t been sold.The investors stopped buying,” he said.Last Tuesday, Bank of Israel adviser Dr. Kobi Braude released an assessment that the Jewish sector in Israel has a deficit of 30,000–40,000 homes to fill, and argued for increased density in high-demand areas. The country’s housing supply has failed to keep up with demand since 2007, which alongside rock-bottom interest rates has led to skyrocketing prices.Kahlon’s stark language on the issue, however, may have been strategic.“Economics is about future expectations, so he thinks maybe he can change expectations, and if he cries ‘bubble, bubble, bubble,’ it’ll change,” said Dr. Efrat Tolkowsky, CEO of the Gazit-Globe Real Estate Institute at the Interdisciplinary Center Herzliya.In Tolowsky’s view, Israel’s current situation should not be described as a bubble, and certainly not one that would burst in the spectacular fashion of the US housing bubble in 2008, which kicked off the great recession and a global financial crisis.“I don’t see a bubble. House prices are high. I would expect that stopping the increase in house prices would be a good enough goal,” she said.Still, the Bank of Israel has been working vigorously to insulate the financial system against shocks from the housing market. In a report last year, for example, it noted that “the financial system’s exposure to the housing market remains a major risk.”A sudden shock such as drop in incomes or change interest rates could have a negative impact on Israel’s banks, the bank said.