The plan included many of the reforms that have been announced since the government was seated, oriented at lowering the cost of food and housing and increasing competition in the financial sectors. 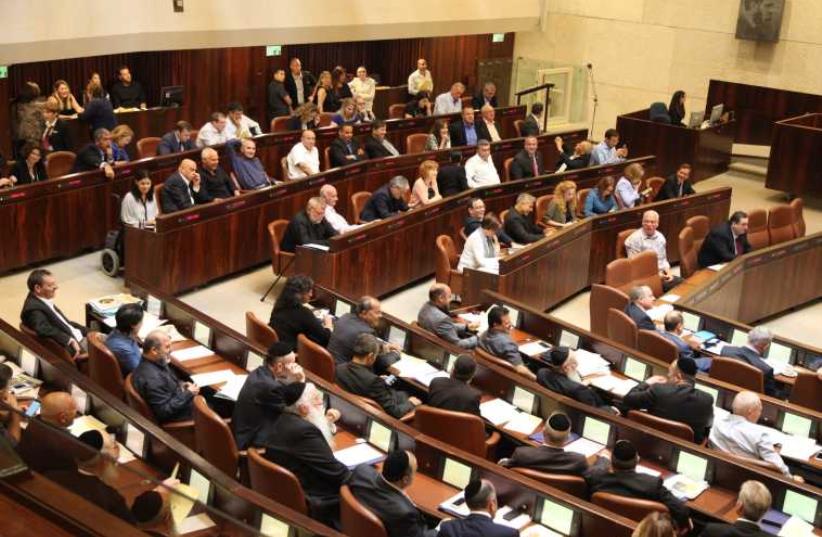 The Knesset
(photo credit: KNESSET SPOKESMAN'S OFFICE)
Advertisement
The budget Finance Minister Moshe Kahlon presented to the government Sunday is chalk full of reforms, but will also see the first rise in Israel’s debt burden since 2009 and cut spending in government ministries by 3% next year.“A budget is not numbers - it is first and foremost values - it expresses a worldview,” Kahlon said upon presenting the budget to the government on Sunday.  “The greatest threat that we face as society is the widening of gaps, and fiscal policy is a tool that can aid in the campaign to reduce the ever-widening gaps.”The plan included many of the reforms that have been announced since the government was seated, oriented at lowering the cost of food and housing and increasing competition in the financial sectors. It will pass the “cornflakes law” increasing dry food competition, the natural resource taxation of the Sheshinsky 2 commission, and agricultural reforms recently announced by Agriculture Minister Uri Ariel.Like his predecessor Yair Lapid, Kahlon brushed aside planned deficit targets, previously pegged at of 2.5% of GDP for 2015 and 2% for 2016, setting both at 2.9% instead, and planning to gradually lower it to 1.5% by 2021 instead of 2019, as previously planned. He once again revised the deficit reduction path for the coming years. Israel has deviated from its planned fiscal plans so frequently that the International Monetary fund said it is functionally non-existent. Both budgets overshoot the legal spending limits by a factor of almost double, and required some fiscal acrobatics in order to hit the new 2.9% targets. The bottom line spending was set at NIS 381 billion for 2015 and NIS 415b for 2016, including debt repaymentsIn 2015, the finance ministry had to scale back NIS 4 billion worth of coalition promises to hit its targets. In 2016, it cut ministry spending by 3%, reduce the NIS 8 billion in spending promised in coalition agreements, as well as squeeze more funds out of the JNF for land it manages for the state.Bank of Israel Governor Karnit Flug spoke out against the latest deviations from Israel’s fiscal path, warning that the deficit, even if higher than originally planned, should not exceed 2.5% of GDP.In comparison to other countries in the OECD, she told the cabinet on Sunday, Israel spends much more on defense (5.8% of GDP in 2014 in comparison to 1.5% in the OECD, and even higher than the US and Russia as a percentage of the economy), and less on social spending (at 30.8% of GDP, it is almost a third less than the OECD average, and second-to-last next to South Korea). The size of the government has shrunk dramatically in the past decade, to the point that it is in the bottom third of the OECD, spending 39.5% of GDP next to 45.1% overall in the OECD. Despite these facts, she argued, the tax burden is relatively low in Israel; if it were the same as other OECD countries, Israel would have another NIS 35 billion in revenues, more than the entirety of the 2015 deficit.“Is it reasonable for a country with high defense expenditures such as we have to collect less taxes than most of the advanced economies?  Is it unreasonable for the extra defense expenditures to be financing by an increase in revenues?” she asked the cabinet in her presentationFlug pointed to tax exemptions “that have no economic or social justification” as a source of revenue that could ease the fiscal pressure, and said there was also “room for some increase in the tax rates in order not to increase the burden of debt that we and our children will pay in the future.”Flug also jabbed the Finance Ministry for attempting to take some of the spending “off the books,” arguing that Israel’s fiscal credibility was at stake.The Finance Ministry took a rosier approach, noting that before the 2008 financial crisis hit, Israel’s debt was just slightly higher than the OECD average of 73.3% of GDP. Since then, the debt in other OECD countries has soared to 110.9% of GDP in 2013, while Israel’s fell to 67.6%While Flug dwelt on the fact that Israel’s relative debt payments are some 80% higher than most OECD countries, the Finance Ministry noted that Israel has cut the rate by more than half since 2002. Had it not, Israel would have to shell out another NIS 40 billion in interest payments this year.If Israel was not careful about keeping its deficits in line, Flug warned, its debt would creep back up, its creditworthiness suffer, and its interest payments could sneak back up.