Tel Aviv-based delivery app kVisi is trying to take the start up to the next stage. 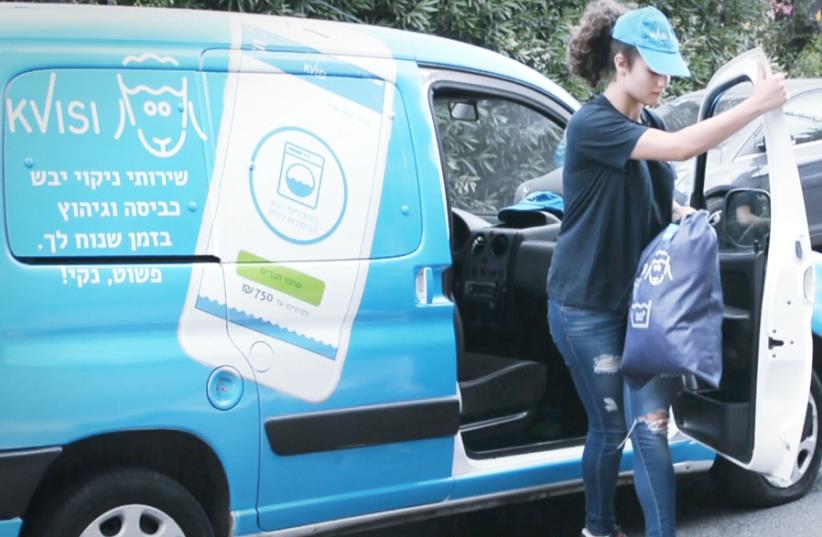 Kvisi app laundry delivery
(photo credit: OHAD SHALEV)
Advertisement
As Erez Adiri saw his on-demand laundry pickup and delivery app expanding, he began to wonder how he might bridge the gap between his company’s initial seed financing and the pursuit of more ambitious Series A investments.After reviewing a number of options, Adiri realized that the perfect interim funding source for his start-up, kVisi, might lie among those customers already sharing their dirty laundry with him on a daily basis.“At the beginning, when I [had] just started this company, I was going door-to-door myself to bring the laundry, just to check the algorithm,” he told The Jerusalem Post on Monday. “While I was doing that, there were many people whom I saw several times, and they said, ‘This is an amazing idea; are you looking for investors?’” Over the past several months, the Tel Avivbased kVisi has raised about $150,000 by enticing its own customers to become company shareholders, in a unique equity crowdfunding campaign. While equity crowdfunding – a mechanism enabling large groups of investors to fund start-ups in return for equity, or small ownership shares – has become increasingly popular in Israel over the past couple years, Adiri felt that specifically targeting an already loyal customer base could provide mutual benefits to both kVisi and its new investors.“When we looked at equity crowdfunding as a way of raising capital and thought of our customers – these two things together – we saw that it would be very successful and interesting,” he said.Out of its 3,000 active customers and 8,000 registered users, kVisi was able to attract about 15 to 20 customers to invest $5,000 or more each – ultimately accounting for 90% of the $150,000 raised in what Adiri describes as a pre-Series A investment round. These funds will boost the company for another six to 12 months until the firm is ready to begin looking for much larger Series A venture capital investments, Adiri said.“For start-up companies, one of the major hurdles is crossing from seed investment to Series A investment,” he said. “Naturally, it makes it very difficult to raise capital, even though they have an amazing product.”While laundry delivery and pickup might not be a novel idea, the key to kVisi’s successful operation is its technology. By employing a special scheduling algorithm, kVisi is able to ensure that laundry is picked up and delivered within a 30-minute time slot, Adiri explained.“The customer experience is very similar to the revolution of Uber on the taxi side,” he said, describing both as low-tech businesses in need of upgrades. “By bringing the technology into an old economy, we are able to provide a much better customer experience.”The sheep-logoed kVisi app, which plays on the similarities in the Hebrew words for laundry, kvisa, and sheep, kivsa, requires just a few seconds of a user’s time to place an order for laundry delivery and pickup. The app serves most of Tel Aviv – Salameh Street in the city’s south up to Ramat Aviv Gimmel in the city’s north – from 6:30 a.m. to 11 p.m., in both English and Hebrew, Adiri said.Users typically receive their cleaned and folded clothes back from the company’s central laundry facility within less than two days. While kVisi’s turnaround might be slightly longer than that of some local laundromats, Adiri said the company thrives on its outstanding customer service and convenience. In addition to sticking to the 30-minute time slots as promised, kVisi’s app sends push notifications about 5 to 10 minutes before arriving at a customer’s apartment.“The whole user experience, from beginning to end, is much nicer for the customers,” Adiri said.Since the company’s launch in August 2015, Adiri said that kVisi’s revenue has been growing by 20% each month. With the $150,000 boost from equity crowdfunding, the firm aims to continue that growth as well as to pursue different forms of digital marketing, prior to seeking out Series A venture capital investments.Once the company secures Series A financing, the company’s leaders plan to consider several expansion routes. With kVisi’s economic scheme and most of its marketing parameters already proving themselves, bringing the services overseas would be one possibility, Adiri said. Another option, he explained, would be selling other laundry- related items to customers already using the app and thereby increase the average revenue per user.A third possible area of expansion would involve selling and implementing the unique algorithm powering kVisi’s prompt pickup and delivery services, he said. One particular sector in Israel he feels could benefit from the algorithm would be on-demand supermarket products.“In Israel, unlike in the US, where you have Instacart and other big technology companies, the actual big supermarket chains are the ones providing that service,” Adiri said.As the company continues to grow, Adiri expressed confidence that his customers- turned-investors would help kVisi improve its services in their new roles as ambassadors for the brand. The crowdfunders should expect to see returns on their investments in the form of either dividends, an initial public offering or, most likely, an acquisition of kVisi by a larger company in the coming years, he predicted.After successfully raising enough money to overcome the nerve-wracking gap between seed and Series A funding, Adiri recommended that other start-ups with a loyal customer base consider doing the same.“If they have a good sense of community around them and if their customers believe that what they’re doing is an amazing thing for the customers, then they have a very good shot in going and raising capital in the same way,” he added.Niv Elis contributed to this report.