Netanyahu calls for international collaboration to beef up cyber security 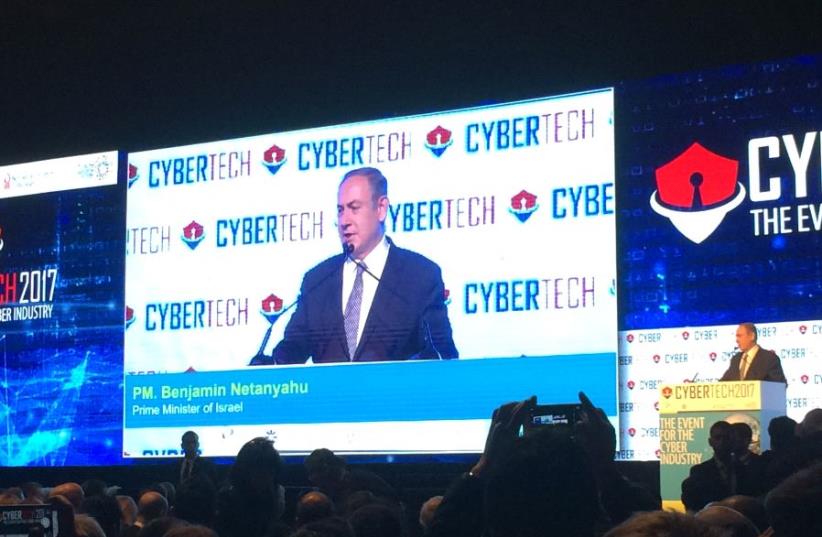 Benjamin Netanyahu speaking at the 2017 Cybertech Tel Aviv conference
(photo credit: SHARON UDASIN)
Advertisement
Just two weeks before his upcoming meeting with President Donald Trump, Prime Minister Benjamin Netanyahu called for strengthened multinational collaborations in the cyber security sector.“By working together, we can more effectively defend against the force of terror, this cyber terror,” Netanyahu told participants at Cybertech Tel Aviv on Tuesday. “It’s important to have cooperation between some governments, especially like-minded governments.”As countries around the world continue to face increased security threats to their cyber infrastructure, it behooves governments like those in Israel and the United States to share their capabilities to battle such dangers, the prime minister said. Heading into his meeting with Trump on February 15, Netanyahu said that one subject he was determined to raise was the issue of cyber security, an area on which the two nations have long been collaborators.“We need to expand this and recognize that there is a core interest of the civilized countries and the democratic countries to protect themselves against cyber attacks,” Netanyahu said. “The more we work together, the stronger and safer we will become.”Cybertech Tel Aviv 2017 is a three-day conference and exhibition involving more than 10,000 participants from around the globe.Co-hosted by media company Israel Defense and Ben-Gurion University of the Negev, Cybertech is the second-largest exhibition of cyber technologies worldwide, with seminars focusing on commercial problem solving strategies and forums like a hacker zone and start-up competition.As the Internet of things – the internetworking of devices – continues to expand, the world will need an infinite number of solutions to the resulting threats, Netanyahu said in his speech.“Today, warfare has changed dramatically,” the prime minister said. “With a click of a button, you can bring nations to their knees very rapidly if you so desire and if you’re willing to take the risks, because every system can be hacked.”“This new type of warfare gets more complicated by the day,” he added.Emphasizing Israel’s leadership role in the cyber security world, Netanyahu described how Israel is uniquely positioned to maintain that standing due to its size, as well as the government’s dedication to the sector.“Our small geographical size need not limit our cyber security capabilities,” he said.“In fact, I think it’s the opposite. Because we are small, we have that power.”Today, he added, Israel receives one-fifth of all global investment in cyber security.“We’re punching about 200 times above our weight,” Netanyahu said. “There’s something here that defies numerical size.”As governments work to move their cyber security sectors forward, the prime minister stressed the importance of minimizing regulation to ensure the industry’s growth.In Israel, the government has approved tax breaks for cyber security ventures and has enabled comfortable landings for large corporations in Israel, he said.“We think this is something we can share with you,” he added.Like the prime minister, a variety of Israeli and international leaders both from both the private and public sectors discussed the critical nature of forming partnerships to tackle the world’s cyber security threats.“Israel is a leader in cyber security, a world leader,” said Michigan Gov. Rick Snyder.“The real issue is how we can learn from that.”In Snyder’s mind, tackling cyber security issues requires collaborative efforts in prevention, detection and response, as well as increasing education among members of the public on the sector’s threats. Often, he explained, people even neglect to prepare an adequate response, because they assume that their prevention and detection techniques are going to be sufficient.“The attack has already happened,” Snyder said. “It simply hasn’t been activated.We’ve already been hit, but we don’t know it yet.”“You need to be prepared for the fact that it may be too late,” he added.In Michigan, the state has created a Civilian Cyber Core, recruiting volunteers from relevant companies to respond to cyber security emergencies, Snyder explained.“It’s the humans that are going to make the difference. I ask you to go out of here today and find two people who don’t get it, and help them get it,” he said. “The cyber world is absolutely incredible, but cyber security has to be mentioned every time you do cyber tech.”Chuck Robbins, CEO of Cisco, likewise stressed the importance of educating people and working together as industry stakeholders move forward in the fight against cyber security threats.“We are going to have to be the first line of defense when the packet hits the wire,” Robbins said. “We need that realtime, open architecture that is absolutely everywhere.”Companies participating in this defense process need to reduce the complexity of the technology and maintain a simple, open and automated structure, he explained.“If we are going to take advantage of being able to correlate all the threat information that we have all over the world, which we are going to aggregate, we have to come together and share threat information as an industry,” Robbins said.Like Robbins, Yiftah Ron- Tal, chairman of the Israel Electric Corporation, also called for information sharing in the cyber security sector.Ron-Tal advocated the establishment of an international cyber event reporting center, to be universally accessible and updated continuously.Such integration, according to Ron-Tal, would provide an opportunity to unite “in the global war against terrorism.”“We are definitely in an ongoing war, in a daily significant strategic and tactical battle,” Ron-Tal said.“The basic rule in combat theory is that the best defense is offense,” he added. “The new rule in cyber warfare is the best defense is to defend.”