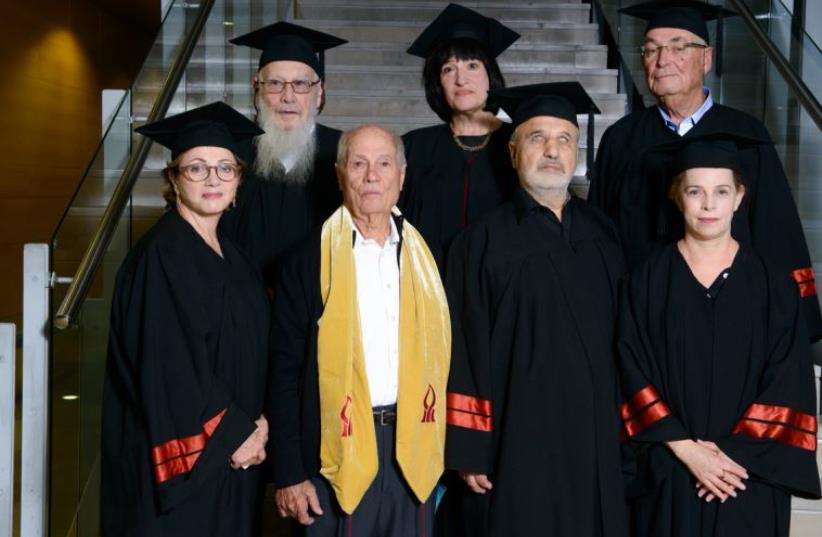 Judy Siegel-Itzkovich recieves honorary doctorate from Ben-Gurion University (Back row middle)
(photo credit: JUDY SIEGEL-ITZKOVICH)
Advertisement
“People think that anyone with a keyboard or smartphone can be a journalist today, but it isn’t true. One must be balanced and reliable, with a great deal of knowledge and patience,” said Judy Siegel-Itzkovich, health and science editor of The Jerusalem Post, who on Wednesday evening received an honorary doctorate from Beersheba’s Ben-Gurion University of the Negev.The ceremony was held on Ben-Gurion Day, which commemorates the passing of the first prime minister, David Ben-Gurion.“When I started to work as a Post reporter in 1973, journalists had a lot of prestige. But today, we are ranked a little above MKs, and that is very low,” she bemoaned. “Numerous Israelis are hostile to journalists, but we are emissaries of the public. Most do their job faithfully and fairly, and some even risk their lives. We are the messengers. Don’t kill the messenger. We bring news – good news like discoveries of new medical treatments and bad news like children dying of hyperthermia when left by parents in a hot vehicle,” said Siegel-Itzkovich, who quoted Thomas Jefferson: “Were it left to me to decide whether we should have a government without newspapers, or newspapers without a government, I should not hesitate a moment to prefer the latter.”Siegel-Itzkovich, who has authored 29,226 articles that were published in the Post, is likely more prolific than any other journalist in the world.She said that her battles for public health, such as against smoking and encouraging the prevention of disease with vaccinations, exercise and proper diet, are more important to her than seeing her byline in the paper.Her honorary doctorate, presented by BGU president Prof.Rivka Carmi and Rector Prof.Zvi HaCohen, was the first such honor received by a Post journalist from any Israeli university since the paper’s founding in 1932. But becoming a doctor, she joked, could have disadvantages: “Now more people in the newsroom will ask me to hand them aspirin when they have a headache, and more readers will seek her medical advice: ‘It hurts me here; what should I do?’” The university conferred five other honorary doctorates at the ceremony. For Prof. Yisrael Aumann, a 2005 Nobel Prize Economics laureate from the Hebrew University, it was his sixth honorary doctorate. He praised BGU, stating that “this magnificent university in the capital of the Negev is the most fitting and worthy memorial to this giant among giants, David Ben-Gurion.”BGU president Prof. Rivka Carmi declared, “David Ben-Gurion’s vision that the future of the State of Israel lies in the Negev is truer now than ever before, with the implementation of the plan to relocate the IDF to the South.We are committed to realizing this vision through science and technology, health and welfare, the humanities and culture and to educating the next generation to leadership, responsibility and societal sensitivity in every field in which they will be active in the future.”The others honored were blind poet Erez Biton, who received the 2015 Israel Prize for Literature; Yizhak Livni, who was commander of Israel Radio, director-general of the Broadcasting Authority and chairman of the steering committee that established Channel 2; artist Michal Rovner; and entrepreneur and philanthropist Judith Yovel Recanati.The Ben-Gurion Negev Award went to Negev activist Dodik Shoshani, a founder of Kibbutz Lahav who campaigned for better education and housing for Beduin.