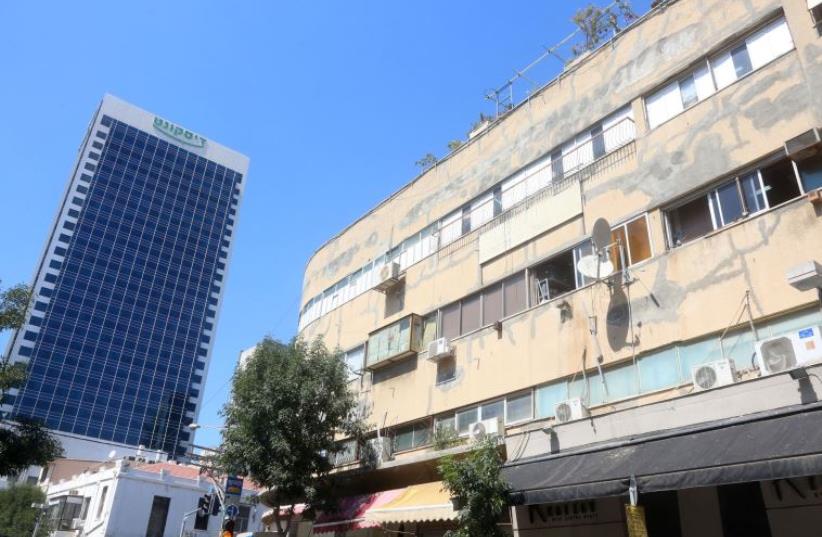 Discount Bank high rise stands next tot dilapidated building in Tel Aviv
(photo credit: REUTERS)
Advertisement
Israel: home to Silcon Wadi and the worst poverty rate in the OECD. The Jewish state houses R&D centers for Intel, Microsoft, Apple and Google, and has one the worst levels of inequality among industrialized countries.While Israelis take pride in the many impressive achievements that have earned it the moniker "start-up nation," there is also a persistent economic failure in the country. A new report on skills the Bank of Israel released Tuesday highlighted some of the ways in which Israel might more accurately be characterized as having two economies, one a high-skilled, high-tech powerhouse and the other a low-skill, insulated laggard. The latter, sadly, is more widespread than the former.All in all, the study found, Israel's labor productivity, our output per worker, is 14% lower than the average in advanced economies. That lack of productivity, however, is concentrated in a handful of sectors, most prominently the food and accommodation services, construction industry, and trade industries. Unsurprisingly, productivity in the electronics industry is higher than average, but not high enough to outweigh the other sectors.One reason behind these differences that Bank of Israel Governor Karnit Flug frequently points out is competition. Industries exposed to global trade that have to compete in international markets tend to step up to the task. Those that sell mostly to the domestic market and are shielded from competition have no reason to follow suit. That's one reason that Finance Minister Moshe Kahlon is obsessed with reducing market concentration, and even wants to invite foreign construction companies to compete with local ones in his crusade against the high cost of housing.But the report found another fundamental problem."The basic cognitive skills of workers in Israel are lower than the OECD average, even though the share of Israeli workers with an academic degree is greater than the OECD average," it said. In areas such as literacy, numeracy, and problem-solving skills, Israelis lagged significantly based on data from the PIAAC Survey of Adult Skills.In other words, despite the fact that more Israelis advance in university than in other places, either their quality of education is lower or those who aren't educated are even less skilled than their OECD counterparts.  Where do those workers work? "In nontradable industries or in tradable industries that sell most of their output to the domestic market."The best investment would be in early childhood education, which provides the most bang for its buck in terms of lifetime payoff in skills.The key, however, isn't more education."Competency is especially lower in construction and trade, and is also inferior in manufacturing industries with a low share of exports, even though the share of college degree holders in these industries is high compared with the share in the OECD," the report noted.Nor is the lack of skills attributable to erosion of skills over time; new workers and veteran ones were just as unskilled.The answer may be, simply, that workers in insulated industries use out-of-date and low-tech methods, and fail to develop better skills on the job because they don't have to. Why automate a process when you can use cheap, unskilled labor?"The low quality of employees is in line with non-complex and low technology work methods," the report said.By way of example, it noted that construction workers in Israel do more physical work than in other OECD countries, and use computers less frequently. In exporting industries, the opposite is true.Unquestionably, there are other factors; the low levels of education and labor participation among haredi men and Arab women, in particular, high among them. But forcing more competition and providing education to endow workers with the necessary skills appear to be central in the cause of uniting Israel's two separate and very unequal economies.