Steinitz: Israel must continue to develop its natural gas potential

Steinitz focused largely on natural gas for its export potential, saying that, when taking into account how much natural gas may be in Israeli waters, “it must be exported to Europe, too.” 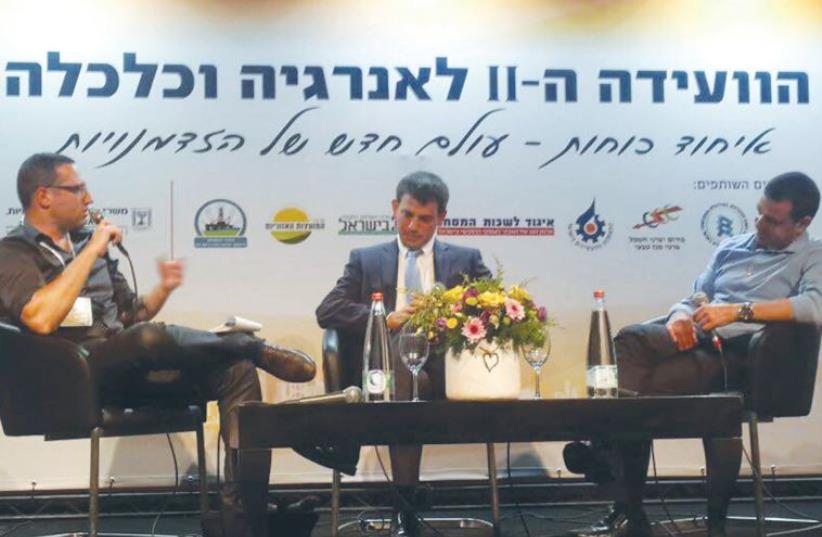 AMIT LANG, director-general of the Economy Ministry (right), Shaul Meridor, directorgeneral of the National Infrastructure, Energy and Water Resources Ministry (center), and moderator Avi Bar-Eli of ‘The Marker’ speak at the conference yesterday
(photo credit: EITAN PARNESS)
Advertisement
Where is Israel’s energy market heading? Though there is general agreement among the powers-that-be that cleaner energy sources are needed, the energy community differs on how to achieve this.The natural gas market is currently the one garnering the big bucks and big market share, but officials from the renewable energy sector are adamant that power sources such as solar and wind energy could be just as economically viable if given the chance.Officials from both sectors came together at the second annual Energy and Economy Conference on Monday. Energy and Water Resources Minister Yuval Steinitz spoke of the country’s need to continue developing Israel’s natural gas potential from a number of known-yet-undeveloped gas reserves within Israeli waters.Steinitz focused largely on natural gas for its export potential, saying that, when taking into account how much natural gas may be in Israeli waters, “it must be exported to Europe, too.”“In order to attract international companies, we need to prove that there is potential,” Steinitz told the crowd. He added that the natural gas framework that was recently approved is one of the “engines of growth” needed to prevent Israel from facing a recession in coming years.Meanwhile, ministry director-general Shaul Meridor explained the importance of Israel’s natural gas market in more fantastical terms. “Natural gas is the biggest revolution ever in the Israeli market,” he said. “Every meter of pipeline…will improve Israel’s competitiveness, decrease production costs and even lower costs for consumers.According to the ministry’s own figures, natural gas is responsible for 60 percent of Israeli electricity, while 3% is from renewable sources.Arava Energy CEO Eran Litvak said that renewable energy could be as widespread and cost effective as convention power sources, were it not for a number of missteps that plague the market. Speaking to The Jerusalem Post at the conference, he said that among the issues in the market is limiting renewable energy quotas, which allows for up to 500 megawatts of Israeli electricity to come from solar power. He added that quotas and regulations have remained fairly unchanged over the past eight years. “I’d rather have five years of [continual progress] than add one gigawatt every five years,” he said.While he pointed out that Arava has signed strategic deals to bring solar power to kibbutzim around the country, the plans are not able to move forward due to the limiting quotas as well as over-regulation and micromanagement. Thus, he said that it can take three years to get a single project up and running.Litvak called for a mindset switch and more trust from the government toward renewable energy companies. “Solar is happening and is ready to happen,” he said.