Management, conservation and reuse of water seen as next big focus area 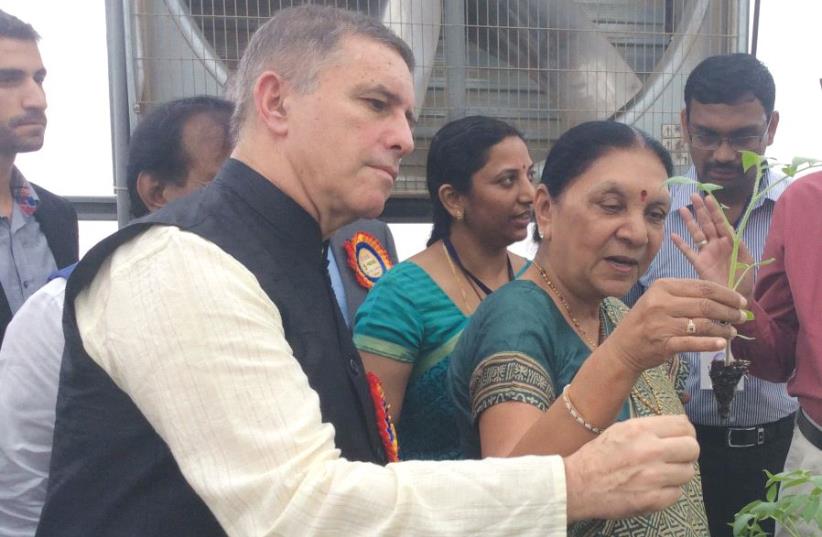 Ambassador Daniel Carmon (left) attends the inauguration of a Center of Excellence in Gujarat, India, with former Gujarat state chief minister Anandiben Patel in 2015
(photo credit: ISRAELI EMBASSY IN NEW DELHI)
Advertisement
From the blossoming mango orchards of Haryana state to the drip-irrigated vegetable nurseries of Gujarat state, Israeli agricultural know-how has become a staple resource on farms across the Indian subcontinent.“Undoubtedly, agriculture is at least one of the two main pillars in India-Israel relations – definitely the main pillar from the civilian angle,” said Gil Haskel, head of MASHAV – Israel’s Agency for International Development Cooperation in the Foreign Ministry.Experts believe the highly anticipated visit by Prime Minister Narendra Modi to Israel in July will boost an already strong agricultural partnership between the countries, paving the way for new joint ventures in an ever-evolving industry.Describing agriculture as “a key factor in the Indian economy and Indian livelihood,” Haskel said Modi is well aware of this fact and is investing significant funds in developing the sector.“We want to use this visit – apart from it being very symbolically historic – as a cornerstone for the upgrading of these relations, specifically in the agricultural sector,” Haskel told The Jerusalem Post earlier this week.Across India today, 15 of 27 planned Israeli “Centers of Excellence” are already thriving, showcasing Israeli agricultural expertise and providing Indian farmers with a value chain of know-how and practical tools. The Centers of Excellence are the fruits of the 2008 Indo-Israel Agriculture Project to which India contributes the physical infrastructure and Israel the innovation.Overseeing the project are a number of bodies, including MASHAV; the Israeli Embassy in New Delhi; and the Agriculture Ministry’s CINADCO: The Center for International Agricultural Development Cooperation. From the Indian side, partners include the Agriculture Ministry’s Mission for Integrated Development of Horticulture, as well as many state and federal governmental authorities.The Centers of Excellence have become so popular on both a domestic and regional scale that they continuously attract guests from neighboring nations, including countries that have no contact whatsoever with Israel such as Bangladesh and Afghanistan.“The idea during [Modi’s] visit is to sign a joint action plan that will specify the exact activity that both countries are planning in these Centers of Excellence and ways to upgrade these Centers of Excellence in the next three years,” Haskel said.The terms of such an action plan, which Haskel said he could not specify at the moment, are under negotiation. During a visit by the Indian Agriculture Ministry’s director-general to Israel last week, however, both sides began identifying a number of key elements that are important to further developing the Indian agriculture sector, he added.Also last week, Daniel Carmon, Israel’s ambassador in New Delhi, organized two days of brainstorming sessions with Indian and Israeli officials, academics and professionals to determine some of the next steps for the partners in both agriculture and water management.“We don’t come with a recipe. We don’t come saying, ‘We have our experience from back home and let us tell you what you should have in India,’” Carmon told the Post.Becoming a “think-tank” for those two days, the Israeli and Indian officials strategized about how they might best combine their respective areas of expertise to plan for “the next 25 years” of agricultural partnerships, he said.“It is a dialogue,” Carmon said. “Usually, development comes from a demand-driven direction and not from not the foreigners who ‘know better,’ so to speak.”Both Carmon and Haskel, as well as CINDACO head Yakov Poleg, identified water – and its management, conservation and reuse – as the next big focus area for the Israeli and Indian partners, both within the agricultural sector and beyond.The officials also stressed the need to recruit members of the private sector to join forces with the government bodies to advance existing and future collaborative projects.Only by taking this direction can the partners “have an impact in such a huge country like India,” Carmon said.The Centers of Excellence are already “seeds of success, operation and cooperation” that are embracing new types of technologies – attitudes that are spreading to farms nearby these hubs, according to Poleg.Yet, he and his colleagues agreed that integrating members of the private sector into this model will be key to the long-term vision of the partners.“People here and in India are looking at what is the next step – how to convert these Centers of Excellence, which are centers of Israeli knowledge, into commercially viable business models,” Poleg said.In Poleg’s mind, the Indian and Israeli partners must work to promote business-to-business cooperation through the existing Centers of Excellence, with an emphasis on local production and the involvement of local Indian companies.While there are many ways to potentially involve the private sector in the centers, Poleg suggested introducing new crop varieties – such as those developed by the Israeli Agricultural Research Organization’s Volcani Center – and marketing them to the local business sector. Doing so would require arranging the necessary legal framework, as such intellectual property is easy to copy, but would enable the launch of a whole new chain of technologies alongside the crops, he said.“Modi’s visit will energize the next stage of agricultural cooperation,” Poleg continued. “It will definitely encourage both governments to think more creatively about how to move to the next step – how to upgrade these existing Centers of Excellence, how to promote business-to-business in these Centers of Excellence.”The visit, Carmon added, is also particularly historical when looking back at the 25 years of diplomatic relations between Israel and India – most of which were characterized by relatively low visibility. While Israel has long been appreciated and admired by India for helping develop the latter’s economy, food, water and security sectors, only recently did high level officials really begin visiting one and other in the public eye, he explained.“In practice, we are doing so many things together,” Carmon said. “The visit will symbolize this and talk about where we stand now and where we want to go beyond those 25 years.”