Amar'e Stoudemire opens up about his ventures and hopes for future entrepreneurs. 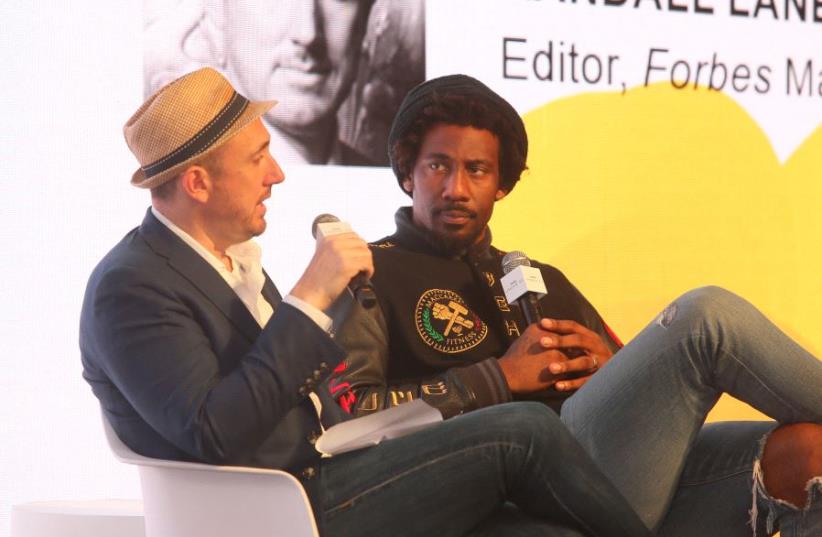 Forbes Editor Randall Lane with Amar'e Stoudemire.
(photo credit: SASSON TIRAM)
Advertisement
Attributing his success to the people around him, American basketball star Amar’e Stoudemire is encouraging the next generation of young innovators to embrace their passions and learn from each other.“When I was drafted at 18 to the Phoenix Suns, I was fortunate to have veteran players around me,” Stoudemire told participants in the Forbes Under 30 Summit, a weeklong event drawing hundreds of the most promising young entrepreneurs to Israel for the second year in a row.“I was learning from great veteran players and I happened to take on that positive influence and apply it to my professional life,” he declared.
Former NBA star Amar"e Stoudemire moves his basketball career to Israel with Hapoel Jerusalem , Aug. 2016 (REUTERS)
Forbes editor Randall Lane hosted a variety of top global and Israeli tech leaders, who discussed the challenges facing the next generation of innovators.Playing in the NBA since 2002, Stoudemire took his career to Israel in 2016 to play for Hapoel Jerusalem, a team he co-owns.Although he has earned nearly $200 million from his NBA career, Stoudemire is also a fashion entrepreneur, an art consultant, a winemaker, an author and a promoter of interfaith cooperation.“I have a passion for each and every venture I’m involved in,” he said.The basketball player is the proprietor of the Melech Collection, an online platform that advises celebrities on purchasing art that is likely to appreciate in value. Although such individuals may have plenty of money to spend on fancy cars and jewelry, they often “don’t pay attention to their money,” Stoudemire explained.“They don’t prioritize and just say, ‘I’m paid, let’s go party,’” he said.Before returning to Jerusalem for that night’s game, Stoudemire also addressed and apologized for several homophobic comments he had made about a month before.In a late February interview on Walla Sport, Israeli basketball players were asked how they would feel if they had a gay teammate. Stoudemire responded that he would “shower across the street” and make sure his change of clothes is “around the corner,” as well as “take a different route to the gym.” Asked by the reporter if the comments were jokes, at the time he said that “there’s always truth to a joke.”Soon after, Stoudemire declared that the remarks were supposed to be “taken as jokes.”At Monday’s conference, he apologetically acknowledged that he may have hurt people’s feelings. “I did reply and say I truly apologize for hurting everyone’s feelings. It was a comedic intent,” he added, noting that he would be attending the Forbes Under 30 special LGBQT meet-up on Tuesday.Looking ahead to this summer, Stoudemire told the Under 30 participants that he would once again be holding his Amar’e Stoudemire Basketball Peace Camp, bringing together players from all of Israel’s diverse cultures.“Everyone came out to the Peace Camp to play a beautiful game of basketball,” he said of last summer’s event.Although he has a diverse array of passions and is always eager to study new ideas, Stoudemire shied away from naming one entrepreneur as his role model. “Business itself is my role model,” he said. “There are so many entrepreneurs that have come and went. I study everyone, everyone’s craft.”Another entrepreneur who took the stage on Monday was Chemi Peres, the son of the late former president Shimon Peres, who likewise stressed the importance of innovating new ideas together and thinking “beyond borders.”“For the first time in history, science allows us to become great, but not on the account of others,” said Peres, who serves as managing general partner and co-founder of Pitango Venture Capital and is chairman of the board of directors at the Peres Center for Peace and Innovation.“We can replace cheap labor with robots with technology.We can replace natural resources with inventions. We can harvest renewable energy. We do not need anymore to expand horizontally,” he said.His father, Peres explained, believed in a “vertical economy,” which involves investing in education and research – growing a tree whose products are technologies.“At the end of the day, the fruits are the likes of Mobileye,” he said.As an investor, Peres stressed the importance of understanding a company’s vision of its potential social impact right from the get-go.“I want to find great companies that are doing something good for the world,” he said. “My father believed that companies must have a global human impact. If they don’t have a global human impact, maybe you shouldn’t invest.”