ORAD’s DROM system can take over device’s piloting from operator. 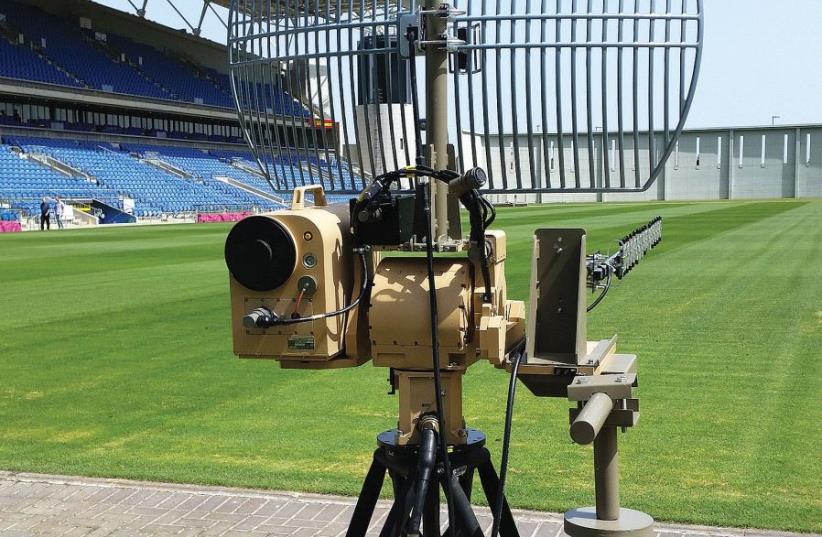 HOLON-BASED ORAD has engineered a 38-kg. drone-defense system that is mobile and easily deployed on land or at sea in any weather conditions.
(photo credit: ORAD)
Advertisement
With weaponized drones bringing a whole new assortment of security threats, several companies at the Israel Defense Exhibition in Tel Aviv this week, showcased the latest technology in neutralization and interception of the devices.ORAD, an Israeli company based in Holon, presented the latest version of its DROM Drone Defense System, which it says can detect approaching drones at more than 3.5 kilometers away and take over the unmanned aerial vehicle, or UAV’s, piloting abilities, neutralize them and land them far from the operator.“These small remote-controlled devices have already been involved in various airborne chaos and spying activities around the world and have become dangerous to government entities and public safety,” the company stated, adding that drones which carry weapons or are used for suicide missions are a growing threat.The Islamic State used weaponized drones against both Syrian and Iraqi forces, and groups like Hezbollah and Hamas have sent drones into Israel and are said to have been working on upgrading the group’s UAVs for use in both offensive operations and intelligence gathering.With a weight of 38 kilograms, ORAD’s DROM system comes pre-engineered and pre-assembled. It is mobile and easily deployed on land or at sea in any weather conditions and has an effective coverage range of 3.5 km. and a 2-km. neutralization capability.The system is also able to land hostile a UAVs in a pre-defined location after intercepting it so any intelligence that may have been gathered does not fall into the hands of the enemy, Yossi Gofer, vice president of sales and marketing at ORAD, told The Jerusalem Post on Wednesday at the exhibition, adding that it can also identify the location of the operator.The latest version of the system also comes with an RF Detection Unit, Gofer continued, explaining that it detects the presence of a drone by analyzing signaling channels and radio transmissions. Once a drone is detected, an alarm is automatically triggered and alerts the system operator of the drone’s presence.In addition to electro-optic sensors and radar, the RF detection systems “provides accurate warning and exact identification of a threat in an urban environment and frees the system from having to depend on needing line of sight,” Gofer said.The Israel Air Force has intercepted drones which infiltrated Israeli airspace by sending fighter jets to take down UAVs as well as using the Patriot system, most recently in April when a Patriot missile intercepted a UAV that penetrated Israeli skies from Syria.In July 2016, two Patriot missiles were fired at a drone that crossed into Israeli airspace from Syria. Both missed their target and the unmanned aircraft returned to Syria. In August 2014, a Patriot missile shot down a drone that entered Israeli airspace from the Quneitra region in Syria close to the Israeli border.But at $3 million per missile, the Patriot system is an expensive way to down a device that may only be worth $200.According to Gofer, DROM is the “most capable and cost-effective” system to counter the threat posed by hostile UAVs. ORAD has already sold the system to clients in several countries including Portugal, Spain and Thailand. The company is also in talks with Israeli agencies interested in purchasing the system.A leader in defense and heavy electronic warfare, the world has for many years looked to Israel for security and intelligence and Israel’s defense industry has leading international companies exporting to countries across the globe. The three-day 8th annual ISDEF exhibition brought in officials and delegates from dozens of countries from around the world and attracted more than 250 exhibitors.