In the first half of the year, 45 high-tech companies completed exit deals averaging $74 million, somewhat higher than the $72 million average deal last year. 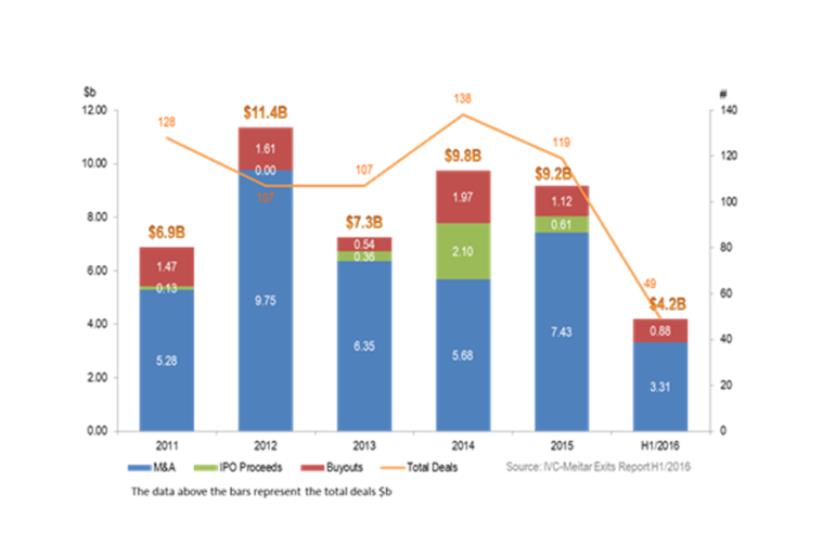 Israeli high-tech exits reach $3.3b in first half of 2016
(photo credit: IVC RESEARCH CENTER)
Advertisement
Israeli high-tech exits reached an impressive $3.3b in first half of 2016, but the overall level is expected to be lower than last year, according to data compiled by IVC Research Center and the Meitar law firm.In the first half of the year, 45 high-tech companies completed exit deals averaging $74 million, somewhat higher than the $72 million average deal last year. All in all, however, the total accounted for just 41 percent of the value of 2015’s exits, below the expected rate.But that might not be a bad thing, according to Koby Simana, CEO of IVC. Instead of looking to quickly sell, Israeli companies may be focusing on growth, which could mean a later increase in public offerings and companies that are global players in their own right. “We don’t think that 2016 figures will be dramatically different than in previous years,” said Simana. “That being said, our projections reflect a decline in exit volumes, since we believe companies are using the current market atmosphere to focus on growth rather than exit.”Of the major deals that went down this year, the three largest accounted for 57% of the total: Mellanox’s $811m acquisition of EZChip, the Siris Capital Group’s $643m buyout of Xura, and Oracle’s $430m acquisition of Ravello Systems.Only one company, trendIT, went public, raising $5.9 million on the London Stock Exchange. In the same period last year, Israeli companies raised $609 million in public offerings, indicating a stunning 99% drop.“The decrease in private companies’ valuations, along with share price fluctuations in the United States and China, led to cautious behavior, most prominently to the now-evident hesitation by acquirers,” wrote Meitar partners Dan Shamgar and Alon Sahar, in a note on the report. “The gap between the bid and asking prices may not be as large as it had been during the 2008 crisis, but it still managed to halt exit processes, except for deals that were already in advanced stages.”They expect the slowdown will continue through the year.Israel’s Chief Scientist Avi Hasson warned two weeks ago that the Start-Up Nation’s “seven years of plenty” may be coming to an end. A report by the National Authority for Technology and Innovation, which he heads, found a weakening of Israel’s hightech industry relative to the global industry across several indicators.