Israeli invention aims to take smartphones out of family time 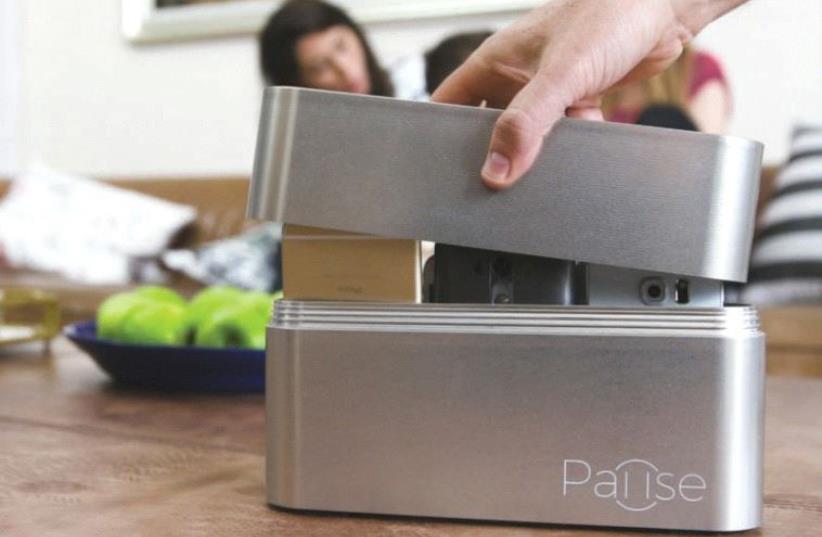 THE ‘PAUSE’ family-time box
(photo credit: Courtesy)
NEW YORK – An Israeli invention, launched on Tuesday, has set out to put quality back in family time by taking smartphones out of the equation.The device, called Pause, is a sleek designed box that blocks Wi-Fi, incoming calls, text messages or emails from cellphones placed inside of it.Using the “out of sight, out of mind” principle, it strives to “remove the temptation of peeking at email or social media when focus is needed elsewhere,” the company said.Pause co-founder Yuval Lazi explained he got the idea about 18 months ago, sitting at the dinner table with his family.“It was one of these normal day when I come back from work and I manage to actually arrive before dinner time and we sat, the whole family, around a table, over food,” he recalled. “But instead of doing what a family should be doing, which is talking, I just received one email from work, and I had to answer it immediately, and then you get a whatsapp, and there’s a call.”Within seconds, Lazi found himself completely immersed and focused on the screen of his smartphone.When he finally lifted his head up, he realized his threeyear- old son Liam had been trying to get his attention repeatedly for over a minute.“He looked at me and said ‘Dad, please put your phone in your pocket,’” Lazi told The Jerusalem Post. “I realized that I was so wrong, and it just turned something inside me.”According the 2014 State of the Kid report released by the company Highlights, which makes educational products for children, Lazi’s son is not alone.The report shows 62% of kids feel like their parents are distracted or focused on other things when they’re trying to talk to them, the main culprit being cell phones.Knowing the problem extended to more than just his dinner table, Lazi then decided to partner with childhood friends and create Pause.According to him, the main purpose of the device is to serve as a constant reminder for people to put their phones aside.“People say to us that they can just turn off their phones, they don’t need our product,” he told the Post. “The thing is: nobody does.”“But if you do it as a ritual, as something that everybody does together, then people will be more likely to do it,” he continued. “We are a tool, we don’t replace education. If you don’t have the drive to do it then you’ll never do it. But if you want to do it and don’t know how, we are offering you something to help you.”He pointed out that Pause can also be used in a workplace setting. The 2015 Lireo Workplace Culture and Communication report shows indeed that 47% of workers say that their biggest issue during meetings is that other participants aren’t paying attention.The Pause box started selling on Tuesday on the crowdfunding website Indiegogo. It retails for $40.