As far as the latest venture in New York is concerned, David said the company’s system will create “peace of mind” for vehicle owners and drivers." 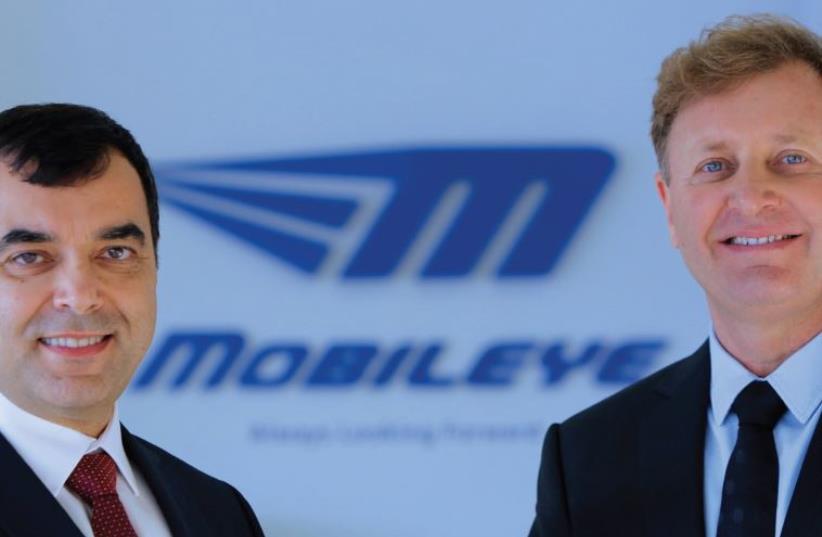 Mobileye founders Prof. Amnon Shashua (left) and Ziv Aviram
(photo credit: Courtesy)
Thousands of ride-share vehicles in New York City are on the road to safer travels thanks to the installation of Israeli collision- avoidance technology.About 4,500 of the city’s ride-share cars, such as those available through popular apps Uber and Lyft, are now equipped with sensors from Jerusalem-based Mobileye, a global leader in advanced driver-assistance systems and autonomous-driving technologies. The cars will feature Mobileye’s high-resolution vision sensors, which analyze potential dangerous scenarios in real time, alerting drivers to impending collisions and giving them ample time to react, according to the company.“As the popularity of ride sharing continues to grow in cities across the country [the United States], it is imperative that these vehicles take advantage of new technologies designed to enhance the safety of drivers and passengers,” said Moran David, director of business development at Mobileye.Mobileye launched the project in partnership with Atlas Financial Holdings, Inc., an Illinois-based firm specializing in passenger transportation service. The system installed in the 4,500 ride-share vehicles also employs the technology of a second Israeli company, Rosh Ha’ayin-based Pointer Telocation Ltd., which specializes in fleet and mobile resources management, enabling vehicle and fleet owners to review the driving behaviors of its operators.While New York is the first city to see the installation of Mobileye systems on such a wide scale, the company has recently undertaken a number of projects across the United States, including about a dozen pilot programs in cities around the country, a statement from the company said.Mobileye also is partnering with the US Department of Transportation in the latter’s Smart City Challenge, a competition to award one city $40 million in grants to support advanced transportation projects, the statement added. The winning city’s public systems will be outfitted with the company’s Shield+ technology, a vision-sensor system engineered to prevent pedestrian collisions in public transit systems.As far as the latest venture in New York is concerned, David said the company’s system will create “peace of mind” for vehicle owners and drivers, who can rest assured that their vehicles are equipped with the most advanced technologies and “an extra layer of safety” for drivers and passengers.“We look forward to working closely with our partners to prevent collisions across the city while improving the driving behavior of operators,” he said.