A new development discovered by Israeli researchers can reshape the future of optoelectronics. 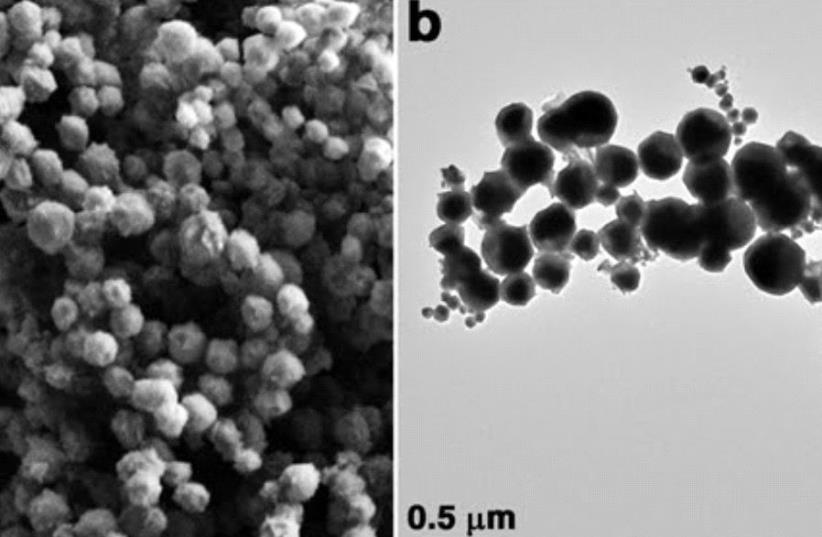 SEM images at different magnification of core–shell [email protected] nanoparticles produced by solar ablation.
(photo credit: BEN GURION UNIVERSITY OF THE NEGEV)
Weizmann Institute and Ben-Gurion University scientists have produced an advance in nanomaterials that can lead in the future to new optoelectric devices, sensors, highly efficient rechargeable batteries and novel superconducting properties.Prof. Reshef Tenne at the Rehovot institute and Prof. Jeffrey Gordon and Prof. Daniel Feuermann at BGU’s Blaustein Institutes for Desert Research learned how to generate stunning new varieties of nanostructures with remarkable optical, electronic, catalytic and mechanical properties. Made up of metal cores within shells of inorganic compounds, they can be generated in the lab in procedures that are simultaneously safe, rapid, high-yield and amenable to scale-up.The two university teams combined expertise in materials science and solar concentrator optics to do this, producing another “first” in the realization of singular nanomaterials – both closed-cage (fullerene-like) and nanotube particles with a metal (lead) core and outer shells of gallium sulfide (GaS).The article detailing their success was published in the journal Nano, which also chose their article to appear on its cover page.The use of immensely concentrated sunlight at the service of fundamentally new nanomaterials represents a new paradigm for solar energy, geared toward generating valued new materials at the service of human technology rather than producing heat, electricity or fuels.But the unique extensive ultra-high-temperature (approaching 3,000°C) reaction and annealing conditions created in the solar furnaces developed by Gordon and Feuermann for these experiments are conducive to these unusual formations.FINDING THEIR WAY IN THE DARK Imagine living in perpetual darkness in an alien world where you have to find food quickly by touch or starve for months at a time. That’s the existence of blind creatures called Mexican cavefish (Astyanax mexicanus). A study by the University of Cincinnati found asymmetry in the cranial bones of this species, which live in the limestone caverns of Mexico’s Sierra del Abra Tanchipa rainforest but are also raised as a popular aquarium pet. The caverns contain deep cisterns cloaked in utter blackness. This is where the Ohio researchers traveled to find the little fish that has evolved to feast or endure famine entombed hundreds of meters below the ground.“They have been able to invade this really extreme environment. They are exposed to darkness their entire life, yet they’re able to survive and thrive,” said Amanda Powers, a UC graduate student and lead author of a study on blind cavefish recently published in the journal PLOS One.“They’ve evolved changes to their metabolism and skull structure. They’ve enhanced their sensory systems. And they can survive in an environment where not many animals could,” she added.Mexican cavefish are bizarre. They are not merely blind but are born with eyes that regress until they completely disappear in adulthood. The bones of their once-round eye orbs collapse. In place of eyes, their empty sockets store fat deposits that are covered in the same silvery, nearly translucent scales as the rest of their pale, unpigmented bodies.Most fish are symmetrical; their left and right sides are virtually identical and streamlined to provide the most efficient locomotion in the water. But cavefish start their lives with symmetrical features like other fish; but when they mature, their fragmented cranial bones harden in a visibly skewed direction, the study found.The researchers suggested that this adaptation helps the typically left-leaning cavefish navigate by using sensory organs called neuromasts to follow the contours of the cave as they swim in a perpetual counterclockwise pattern. This behavior was observed among captive cavefish, which keep moving around the edges of their tanks, while surface fish tend to stay motionless in the shadows of their tank or swim in haphazard ways.“That was a real big piece of the puzzle for us,” said biology Prof. Joshua Gross, a co-author of the study. “It’s a mystery how they’ve been able to adapt. The amazing thing is that they’re not just barely surviving – they thrive in total darkness.”Cavefish are especially valuable for evolutionary study, Gross said, because of their genetic relationship with readily abundant surface fish. Many antecedents of other cave-dwelling animals have become extinct due to natural selection or calamity