The app has been running as a pilot for about a year, and in its full form for about a month, the program information said. 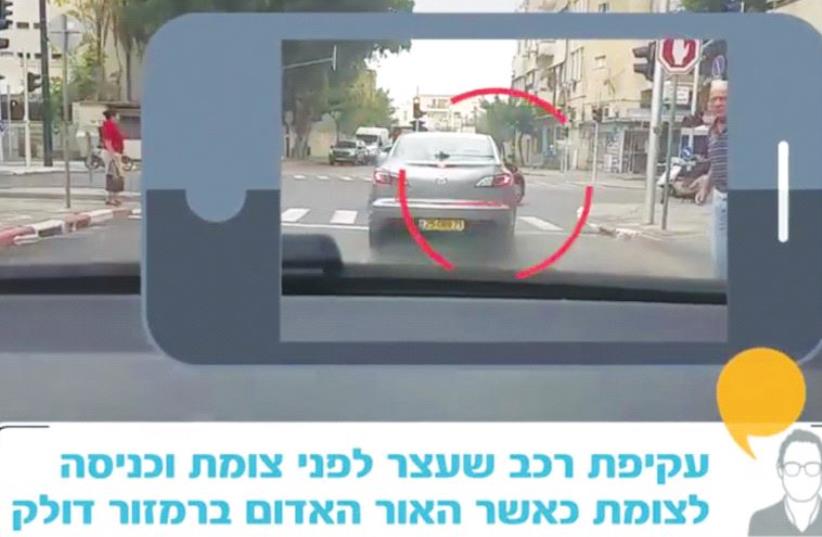 MORE THAN 10,000 volunteers have joined the new Guardians of the Road project of the Road Safety Administration to bring traffic violators to justice via a sophisticated computer link like the one shown here. The Hebrew text describes the driver ahead running a red light.
(photo credit: screenshot)
Advertisement
Israeli drivers can now channel their road rage into revenge – by landing the guy who illegally swerves into their lane with a ticket. In hopes of deterring Israeli drivers from committing traffic violations, the National Road Safety Authority is recruiting volunteers to help enforce traffic laws through a new app that continuously photographs the road from the windshield.The initiative, called Guardians of the Road – Social Change on the Roads, aims to “combat the phenomenon of roadside bullying through an advanced technical means for documenting life-endangering traffic violations, while creating a deterrence among drivers against committing these crimes,” according to the authority.Developed by a team of experts, including information security and traffic accident researchers at the Technion, the app provides a first-of-its kind digital means of connecting citizens to law enforcement bodies.Guardians of the Road is a joint project of the National Road Safety Authority and the traffic division of the Israel Police, in conjunction with the Safe Lane NGO.After a volunteer’s cellphone with the special app is activated at the beginning of a trip, the app continuously photographs the road from behind the windshield.When the volunteer spots a violation, he or she gives a voice command and the app automatically reports the event to an authority control center.Following a thorough examination, all serious violations are transmitted to the Israel Police.The app has been running as a pilot for about a year, and in its full form for about a month, the program information said.During the pilot year, more than 7,500 traffic violations were documented.From the moment the fullfledged project was launched a month ago, more than 10,000 citizens have signed up with the National Road Safety Authority to join the effort.While the application cannot be downloaded from a smartphone store, those interested in participating can register, and will be selected to join based on a variety of preconditions – such as age, geographical location and a lack of serious traffic offenses in the past five years, the authority said. The app’s launch comes at a time when traffic fatalities in Israel are particularly high.Despite a steady decline in roadside deaths from 2002 to 2012, the years that followed brought about a worrisome climb. In 2015 alone, 357 people were killed in traffic accidents in Israel – a 12 percent jump from the previous year’s 319 deaths, according to statistics presented at a recent Economic Affairs Committee meeting.The Guardians of the Road initiative hopes to curb such accidents and help make Israeli roads significantly safer.“If we, the driving members of the public, are afraid that the driver in the lane next to us or behind us is photographing us, we will begin to think twice about performing a traffic violation,” said Mordechai Doani-Bahiri, director-general of the National Road Safety Authority. “From the moment of the project’s launch, the National Road Safety Authority’s offices have been flooded with requests from citizens, who are also tired of the situation on Israel’s roads and want to join the project and change the driving culture in Israel.”For Zemer Blondheim, the chairman of Safe Lane, the initiative enables civil society to “take a step forward and take responsibility for what is happening on the roads that belong to all of us.”“This reflects a winning combination between the government and the third sector, with the support of the business sector, in order to make the difference on the roads that we all desire,” Blondheim added.