The projects will focus on solar, wind, water, and smart grids. 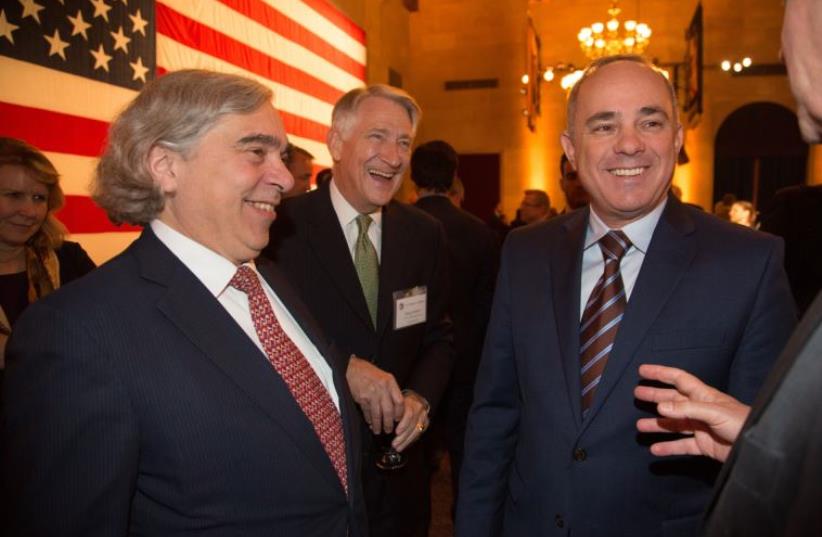 Minister Yuval Steinitz, Thomas Donohue of the US Chamber of Commerce and US Secretary of Energy Ernest Moniz at a recent BIRD Energy reception to support U.S.-Israel energy cooperation
(photo credit: DAVID BOHRER, U.S. CHAMBER OF COMMERCE)
Advertisement
Aiming to tackle key challenges in the renewable energy sector, the energy arm of the US-Israel Binational Industrial Research and Development Foundation will grant $5.1 million to six new American-Israeli ventures in the field.BIRD Energy awarded these latest grants as part of the seventh round of funding provided to American and Israeli firms since the program’s inception in 2009.This year, the six projects focus on solar energy, energy efficiency, smart grid development and wind energy, according to BIRD.Administered by the US Department of Energy and the National Infrastructure, Energy and Water Ministry, BIRD Energy was established as a result of the US-Israel Cooperation in Energy Independence and Security Act of 2007, followed by the Israeli government approval of the program in 2008.In addition to their $5.1m. in direct funding, the newly approved BIRD Energy projects will be able to leverage private sector cost sharing for a total project value of $11.3m., the program said.BIRD Energy has funded 28 projects thus far, investing about $22m. total.“Renewable energy and energy efficiency improvements are essential to shaping our clean energy future,” said US Energy Secretary Ernest Moniz. “This partnership with Israel makes possible collaborative investments that move us closer to rigorous technology breakthroughs. These advancements are a key part of modernizing our energy infrastructure, enhancing our energy security, and mitigating the risks of global climate change.”Yuval Steinitz, Minister of National Infrastructures, Energy and Water Resources, described the program as “a success story of cooperation based on the strategic vision of the two economies.”The funding initiative, he explained, promotes “partnerships among the most innovative capabilities, generating significant value and benefit to both countries.”Among the projects receiving funding is a partnership between Jerusalem-based 3GSOLAR Photovoltaics Ltd.and King of Prussia, Pennsylvania- based Arkema Inc.to develop thin and flexible printed solar photovoltaics for wireless electronics.A second project, involving solar energy production over water reservoirs, will be conducted by the Kibbutz HaOgen- based Haogenplast Ltd.and Tuscon, Arizona-based Global Solar Energy, Inc. Also in the solar energy and water sector, Jerusalem-based Solaris- Synergy and San Francisco, California-based Pristine Sun LLC will be collaborating on a utility scale, low-cost floating photovoltaic solar energy system.In the wind energy field, Rehovot-based Pentalum Technologies Ltd. and Lubbock, Texas-based Texas Tech University will be partnering to develop a light detection and ranging (LiDAR) wind farm controller and optimizer.Another wind project will focus on protecting birds and bats from wind farms, in a partnership between the Hebrew University of Jerusalem’s Yissum company and the Setauket, New York-based Applied Biomathematics, Inc.The sixth and final project, belonging to the Jerusalem- based Ayyeka Technologies, Ltd. and the Dexter, Michigan-based UIS Holdings, Inc., will develop smart grid technologies that focus on remote metering, efficiency analytics and performance enhancement.“BIRD Energy has demonstrated significant added value and mutual benefit, supporting innovation on renewable energy and energy efficiency in both countries and providing critical funding for the success of the companies and their partnerships,” said Eitan Yudilevich, executive director of BIRD.Although the six projects receiving funding will do so through BIRD’s still relatively new energy arm, the larger BIRD Foundation was established in 1977 by the US and Israeli governments. To date, BIRD has provided grants for about 900 industrial research and development projects, and generates its funding income from repayments by successful projects, as well as interest earned on endowment grants.BIRD funds up to 50 percent of each company’s research and development expenses, and claims repayments as royalties only if commercial revenues are generated from the project. BIRD has yielded about $10 billion in direct and indirect revenues by foundation sponsored activities.