The Technion researchers’ success in growing a porous crystal in the lab is based on an innovative process developed by Pokroy and Koifman-Khristosov – thermal treatment of thin layers of gold. 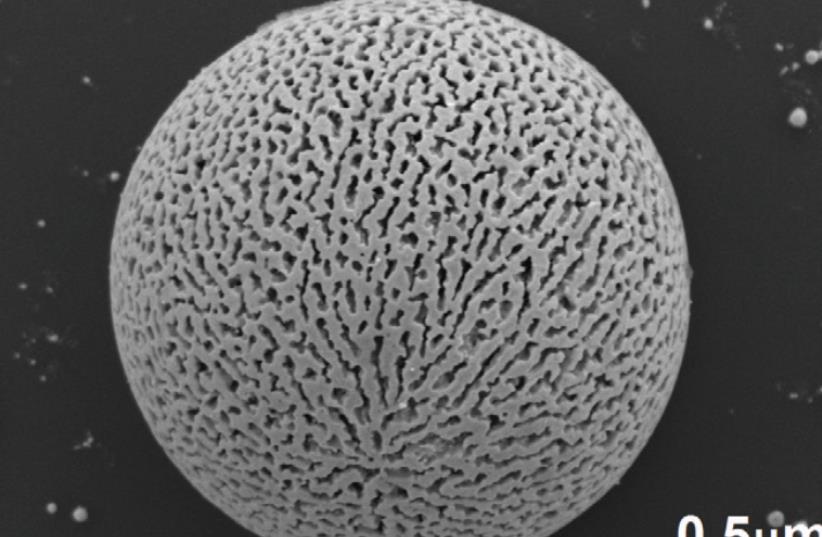 THIS ENLARGED PHOTO reveals microscopic details of the nano-structure of the single crystal of gold recently created at the Technion.
(photo credit: TECHNION)
Advertisement
Gold – at least an artificial, porous, single crystal of the precious metal – has been “grown” for the first time in the world by scientists at the Technion-Israel Institute of Technology in Haifa.The breakthrough achievement was conducted by doctoral student Maria Koifman-Khristosov under the guidance of Prof. Boaz Pokroy of the science and materials engineering faulty; the report has just been published in the prestigious journal Nature Communications.“Our motivation in developing the new technology is purely scientific,” said Koifman-Khristosov, “but these materials clearly have many potential applications.Single crystals have multiple advantages resulting from the absence of the nuclear boundaries characteristic of ‘normal’ crystals. These advantages include mechanical strength, high resistance to heat and enhanced conduction of electricity and heat.”Crystalline material may contain one or several crystals. A single crystal is a substance made up of atoms arranged in a long-term periodic arrangement, while a multiple crystal is made up of single crystals that have different characteristics from those of single crystals – the difference arising from the different arrangement of atoms.Single crystals exist in nature in various materials. A diamond, for example, is a single crystal of carbon. In nature there are organisms capable of creating single crystals that look non-crystalline – rounded in shape with no straight facets.Sometimes these crystals are porous.“In nature there are crystals with highly complex shapes and with no facets at all, and they are actually a single crystal,” noted Pokroy. “For example, the spines of a sea urchin are single crystals. People who are not experts on the subject will find it hard to believe that these are single crystals.”Artificial single crystals grown in the lab are generally characterized with clear facets. Up to now, rounded and porous crystals like those in nature have hardly ever been grown in the laboratory, because this production process is a highly complex scientific and engineering challenge. “Of course one can produce ‘crystalline’ single crystals in the laboratory and then process them until they reach the desired complex shape, but this is an expensive and prolonged process – and is actually impossible when we ultimately want to obtain a porous crystal. Therefore, considerable effort is being invested in developing methods for growing single crystals.”The Technion researchers’ success in growing a porous crystal in the lab is based on an innovative process developed by Pokroy and Koifman-Khristosov – thermal treatment of thin layers of gold and germanium. This treatment creates liquid droplets tens of microns in size.Cooling the droplets enables the gold to crystallize, creating a single nucleation point, making possible the formation of a porous single crystal. Thorough testing of the product, using advanced equipment at the Technion Electron Microscopy Center, revealed that these are single crystals containing channels tens of nanometers in diameter.Pokroy earned three degrees at the Technion and returned to the Haifa institute in 2009 after a post-doctoral fellowship at Harvard and Bell Labs. “My stay in the US was very interesting,” he said, “and I was happy to get a job here in Israel on my return.” He compared the students at the Technion with those at Harvard: “They are just as good.”