The new network was launched on Wednesday as part the British government's larger "Digital Strategy." 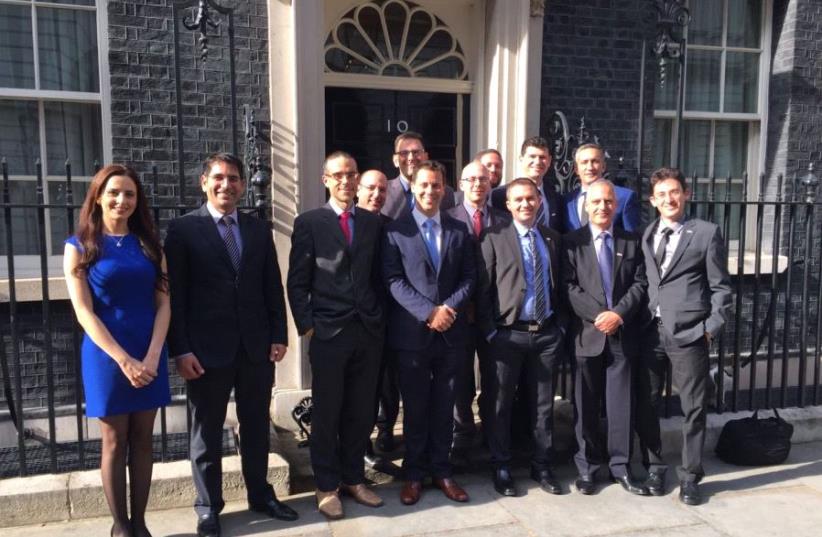 The Hub team with then Foreign Secretary Hammond, in 2015
(photo credit: LOUIZ GREEN)
After the success of the British Embassy’s UK Israel Tech Hub, the United Kingdom will launch a global network of similar tech hubs, the government said.Since its foundation in Tel Aviv in 2011, the UK Israel Tech Hub has facilitated more than 80 bilateral technology partnerships, valued at approximately £62 million, the British Embassy said Wednesday. The network, which will include five international hubs in emerging markets, will strive to develop partnerships among UK companies and local hi-tech firms.“[Wednesday’s] announcement is further evidence that tech relations between the UK and Israel are stronger than ever, and are now an inspiration for the UK’s tech engagement around the world,” said Ambassador to Israel David Quarrey. “The UK Israel Tech Hub plays a vital role in forging a strong tech and innovation partnership.”The network was launched as part the British government’s larger “Digital Strategy,” which is focusing on expanding digital skills in the UK. Administered by Secretary of State for Culture, Media and Sport Karen Bradley, the Digital Strategy also includes fin-tech (financial technology) competition, a business connectivity forum and £1 billion worth of funding to accelerate the development of British digital infrastructure.“If you are living in the UK today, you use technology from Israel daily – in banks, hospitals, digital government services and even online shopping,” Quarrey said Wednesday. “Britain’s new Digital Strategy acknowledges the success of the hard work we’re doing to advance these relations and it sets a promising future for our tech cooperation.”Among the 80 collaborations supported by the UK Israel Tech Hub have been deals between Britain’s RBS and Israeli cyber and fin-tech companies; a cooperation between the UK’s Dyson and the Israeli start-up BreezoMeter; and a partnership between pharmaceutical giant GlaxoSmithKline and researchers from Haifa’s Technion-Israel Institute of Technology, to co-develop new treatments.Naomi Krieger Carmy, director of the UK Israel Tech Hub, expressed her enthusiasm that the British government “has recognized the unique potential of the model we have developed with Israel,” crediting the ambassador, Tech Hub chairman Haim Shani and the rest of her team for building a successful venture.“We have grown this ‘startup’ over the past five years to a successful model which delivers significant business value to both economies,” Krieger Carmy said. “I look forward to working closely with colleagues in London and the five new locations around the world, to adapt and roll out the model and create a global tech network for the UK, with Israel taking a central position within it.”