“This is a great honor for Mexico to be among the first countries in the world and the first in the Americas to generate electricity from ocean waves,” said CEO of Eco Wave Power Mexico. 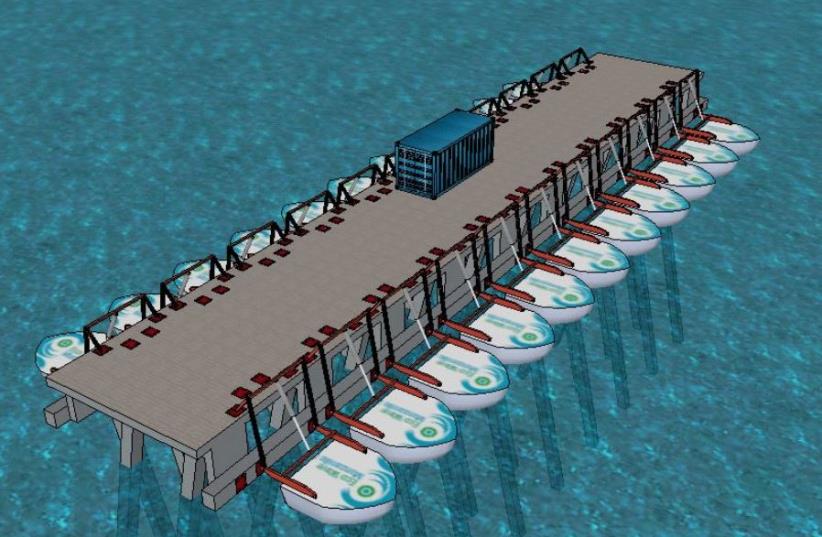 Eco Wave Mexico power plant illustration
(photo credit: Courtesy)
An Israeli company that harnesses energy from ocean and sea waves will be building Mexico’s first such facility, along the country’s southwestern Pacific Ocean shore.Through its subsidiary Eco Wave Power Mexico, the Tel Aviv-based Eco Wave Power will be constructing a 4.1 MW wave power plant at the Manzanillo Port in the state of Colima, the company announced on Monday.Although Eco Wave has procured an interconnection approval from Mexico’s National Energy Control Center for an overall capacity of 25 MW, the company said it plans to execute the remainder of the approved quota in a gradual manner.“This is a great honor for Mexico to be among the first countries in the world and the first in the Americas to generate electricity from ocean waves,” said Ernesto Delarue, CEO of Eco Wave Power Mexico.Both the state of Colima and the municipality of Manzanillo are expected to benefit directly from the power generated by the plant, a statement from the company said.The project is already in a very advanced planning stage, as Eco Wave has already purchased 5,000 sq.m. of land for its machinery and environmental, wave and soil studies, the statement added.The company has already submitted the executive project to Mexico’s Secretariat of Communications and Transportation for final approval.After raising an initial $1 million for the project’s implementation, the company is preparing to raise an additional $12m. in the next six months.“We are very excited and looking forward to receive the remaining permits and start the construction of Eco Wave Power’s first power plant in Mexico,” said a joint statement from the company’s co-founders, David Leb and Inna Braverman.Operating on- and nearshore, the company’s technology works by employing “floaters” that are able to survive during hostile storm environments.The floaters, or buoys, “rise and fall with the up and down wave motion, lifting force, change of water level, hydraulic air lock and incident flux of waves,” the firm said. An automated control system is able to supervise the rise and submersion process of the floaters in case of stormy conditions.Eco Wave Power has been operating a power plant off the coast of Jaffa in Israel for the past three years, for which it earned recognition as a “pioneering technology” company from the chief scientist’s office of the National Infrastructure, Energy and Water Ministry.In addition, last year, Eco Wave officially switched on its first grid-connected wave energy system, in a project co-funded by the European Union Regional Development Fund in Gibraltar. The facility is currently generating an initial 100 kW of a future 5 MW, which is expected to satisfy 15% of Gibraltar’s entire electricity consumption needs, the company said.All in all, the company has a pipeline of 130 MW worth of future projects worldwide, and has established subsidiaries in Gibraltar, China, Chile, India and Mexico.