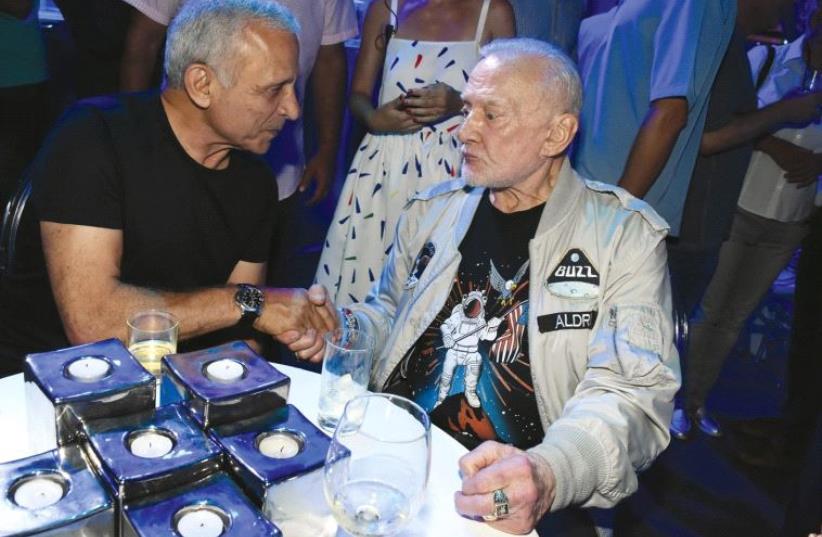 EITAN BEN ELIYAHU (left) and Buzz Aldrin.
(photo credit: AVIV HOFI)
Advertisement
1. Final frontier NASA astronaut Don Thomas visited MadaTech – the National Museum of Science, Technology and Space on Monday, in honor of the opening of “The Hitchhiker’s Guide to the Galaxy” festival.During the event, which was hosted by chairman of MadaTech Leon Recanati and CEO Eli Schermeister, Thomas spoke about seeing Israel from outer space and added “this is the first time I’m seeing it from the ground.” Rona Ramon, president of the Ramon Foundation, moved the audience in her speech, talking about the importance of encouraging the future generation of space researchers, to benefit a better future. The event was attended by president of the International Space University (ISU), John Connolly, chairman of the Heinlin Foundation, Arthur Dula and Peretz Vezan, director-general of the Ministry of Science, Technology and Space.2 & 4 SpaceIL Last week, chairman of SpaceIL, Morris Kahn and Ariella Kisch Delaney held a summer “spaceship” party for the organization, which was established in an effort to land the first Israeli spaceship on the moon and to be the Israeli representative in Google’s exclusive competition “Lunar XPRIZE.” The out-of-thisworld event which was held in Tel Aviv was attended by 700 visitors, including top business and finance executives.The honorary guest was American astronaut Buzz Aldrin, the second man to walk the moon. Among those who took part in a photography project of launching photos to space were Opposition head Isaac Herzog , Gideon and Yair Hamburger, Shaul and Rachel Lotan, Nava Barak and Shalom Zinger, Chaim Katzman, Eitan Ben-Eliyahu, Sammy and Tovah Segol and Vered and Ilan Grinboim.Also enjoying the party were Amnon Dick, Erez Vigodman, Ruthi and Gabi Lest, Gigi and Daffi Levi, Udi Recanati, Tzaki Rosenfeld, Doron Almog and Ayelet Yemini, Yehuda and Tami Raveh, Israel Makov and Frank Malul.3. Cocktail bus Dror Eshel, CEO of Feldman Ice Cream, arrived with the company’s “Cocktail Bus” to Wingate Institute in order to hand out free popsicles to the soldiers training there. Alongside the soldiers enjoying “pina colada” and “margarita” non-alcoholic treats on a hot summer day, were Col. Oren Gil, head of the Combat Fitness Division and Lt.-Col. Gil Hamber, commander of combat fitness training base, who checked the bus out.The cocktail bus has been touring all over Israel for the past few weeks.Arts excellence The Harvard Club of Israel awarded choreograph Ohad Naharin a special award for excellence in the arts, for his achievements in the field of dance and his contribution to the Israeli society.A ceremony that took place at the Israel Museum in Jerusalem was attended by James Snyder, director of the museum, and Harvard graduate Scott Mortman, a member of the club’s board, Sagi Melamed, chairman of the club and other representatives of the Harvard Club of Israel, which consists of over 1,000 members.