‘Think of Romania as an extension of your domestic market’ 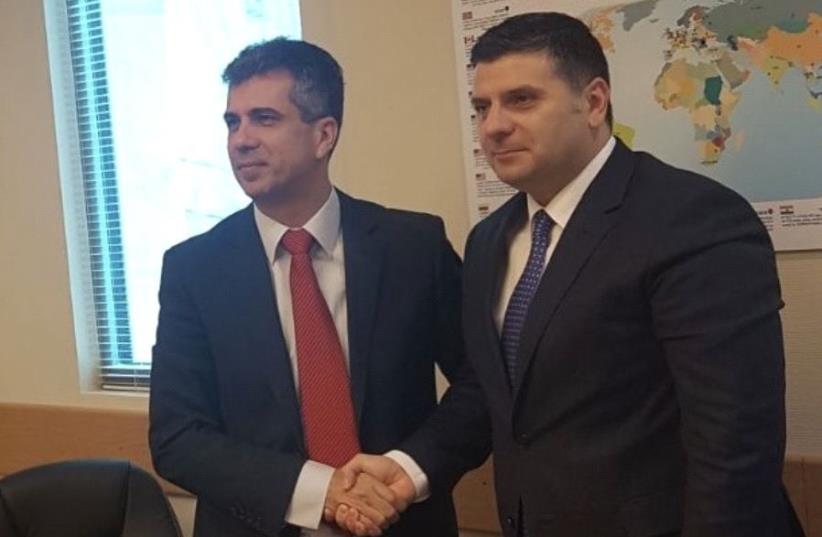 Israeli Economy Minister Eli Cohen and Romanian Business Environment, Commerce and Entrepreneurship Minister Alexandru Petrescu
(photo credit: COURTESY OF ALEXANDRU PETRESCU)
Advertisement
Although Israel and Romania have enjoyed a strong diplomatic relationship for 68 years, bilateral trade between the two countries has much room for improvement, a Romanian minister told The Jerusalem Post on Monday.“We currently have half a billion euros in trade exchange between the countries,” said Alexandru Petrescu, minister for Business Environment, Commerce and Entrepreneurship. “This doesn’t really match the willingness on both sides, and, most importantly, the potential of trade between the two countries.”Petrescu sat down with the Post in Airport City on Monday, in the middle of a two-day trip to Israel to meet with Economy Minister Eli Cohen, Israel Innovation Authority officials and a variety of Israeli companies already doing business in Romania. Stressing that Romania perceives Israel “as a special partner in the Middle East,” he said that the countries must substantiate this perception by boosting their business relations.“I was quite keen to be in Israel because the level of trade is way under the potential, and it was important to allocate the first day in Israel to meeting with businesses,” said Petrescu, who has been in office since January.On Sunday, Petrescu met with representatives of several large Israeli companies already active in Romania, including logistics services provider the Maman Group, vehicle importer the Carasso Group, drip irrigation leader Netafim and defense technologies company Elbit Systems – the latter of which manufactures many components of its products in Romania. While his hope is that these companies will increase their investments in their Romanian operations, Petrescu also held a roundtable the following evening for other firms either already present or interested in expanding to his country.In order to further accelerate business and trade opportunities between the two countries, Petrescu met with Cohen on Monday morning. The ministers decided to initiate two conferences in Israel and Romania to promote business opportunities and scheduled a date later in the year to convene the Romanian-Israeli Joint Economic Commission – a partnership proposed in 2007 that has yet to be assembled, Petrescu said.“I think we can help in increasing the volume of trade by better harmonizing the business environment with political initiatives,” he added.As his government continues to allocate funds to emerging entrepreneurs, Petrescu said that Romania is working to replicate Israel’s hi-tech ecosystem – with an interest in “everything that’s centered around innovation and startups.”“The model that Israel is setting up has proved to be a successful one,” he said. “In Romania, we want to germinate business.”One Israeli start-up accelerator has already agreed to duplicate its activities in Romania, Petrescu added. As the country adapts Israel’s entrepreneurial framework to meet its own business environment, he stressed the importance of making “the average Joe” aware that funds are available for good ideas in the making.While Romania could significantly benefit from bolstering trade and business partnerships with Israel, so, too, could Israel profit from a strengthened relationship, according to Petrescu.“We can build on the foundation of a common cultural heritage,” he said, noting that more than 400,000 Romanian Jews live in Israel, while the Jewish community Romania is about 20,000 strong.Romania, Petrescu explained, has the fastest growing economy in Europe, with a growth rate of 4.8% last year and an expected growth rate of 5.2% this year. In such an environment, Israeli businesses can find highly skilled workers, as well as a chance to expand to the larger European Union market, with “Romania as the gateway,” he said.“We are a truly business-oriented government,” Petrescu continued. “We engage with priority with business interests and we are looking to create from Romania one of the most attractive and friendly business environments.”To do so, the Romanian government is trying to shift the country’s focus from low added-value products, like natural resources, to high added-value products, in a process he called “re-industrialization.”Working with Israeli businesses often fits perfectly with this strategy, Petrescu said.In an era where voices of the BDS movement are growing increasingly stronger around the globe, Petrescu emphasized that Israeli businesses will find a friendly home in Romania.“We are a very welcoming country to Israeli business interests,” he said. “The whole rationale for me being here is to repeat personally that the Romanian market is open to Israeli businesses, in the same way that the Israeli market is extremely favorable to Romanian businesses. So please think of Romania as an extension of your domestic market."