Catch 22: The BOI and the foreign exchange market 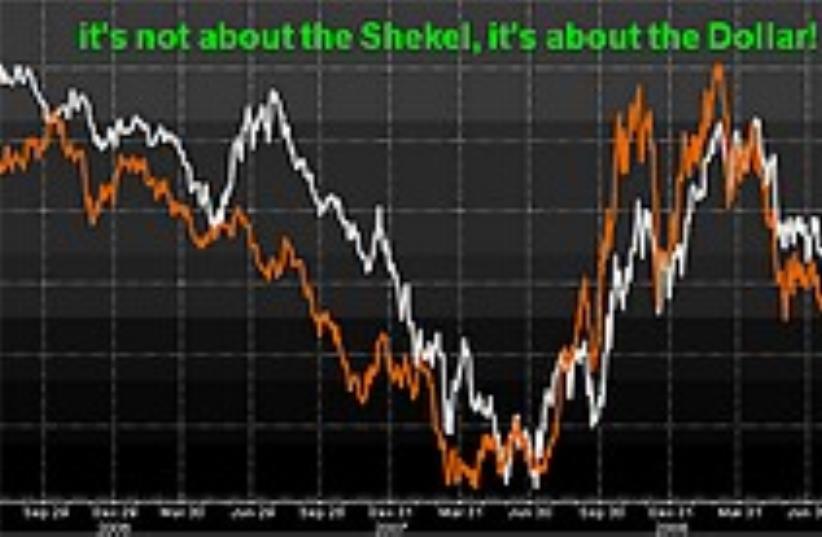 USD-ILS (white) vs. DXY Index (orange. represent t
(photo credit: none)
Advertisement
The current weakening trend of the dollar againstthe shekel worries the Bank of Israel (BOI). The bank has beenintervening in the foreign exchange market since March 2008. Itincreased its foreign currency reserves by 75% to about 50 billiondollars during that period to strengthen the dollar in order to supportthe export sector.

Although BOI continues to implement its policy,the dollar has depreciated by 10% against the shekel in the last 3months, in accordance with the trend of the dollar against the maininternational currencies (as shown by the DXY index below).

This development suggests that the BOI's "dollar policy" islosing its effectiveness, either in its physical context orpsychological. In other words, if the dollar will keep depreciating inthe international foreign exchange arena, it will also depreciateagainst the shekel, and vice versa.

As a result, policy makers face a huge dilemma with regard tothe dollar policy. There are two important tools that may be used byBOI in the near term which may affect the movements of the domesticforeign exchange market. The first is the change in foreign reserves.BOI has to decide whether to keep on with its current policy ofpurchasing (US$100 million per day, and US$50 on Fridays) or bring thepolicy to an end. The option of increasing the purchase rate or sellingdollars is not discussed because in the current environment these sortof steps will be politically incorrect.

Then, if BOI decides to carry on with the currentpolicy, it exposes its balance sheet to a foreign exchange risk, marketrisk and inflation risk. Buying dollars means selling shekels andincrease market liquidity, which can push inflation up. In the currentstabilizing environment, where inflation can be across the corner, sucha step would be wrong.

On the other hand, discontinuing the purchases may be anegative signal to foreign exchange investors, and it may cause afurther depreciation of the dollar against the shekel. Stronger shekelwill reduce the attractiveness of Israeli goods and services forforeigners.

As a consequence, the Israeli export sector may suffer great revenue losses which will drive up recessionary pressures.

The other tool is the interest rate. Sooner or later the BOIwill have to raise the interest rate. Raising the rates will increasethe spread between Israel and the US Federal bank rates. Such a stepwill support a further appreciation of the shekel.

Certainly, BOI would prefer to start its tightening campaignafter the Federal Bank, because this could drive the dollar up andprovide some oxygen to the domestic export sector. However, BOI may nothave this privilege because of rising inflation pressures. Nowadays,short run expectations are above BOI inflation target. If it continues,interest rate will be raised much sooner than previously expected -September to October.

To conclude, policy makers face a foreign exchange policy trap.Interest rate will go up soon, probably before the tightening abroad.Keeping on with the current dollar policy may drive up inflationarypressures and put BOI's balance sheet in risk. Moreover, the marketresponse may not be significantly negative in case BOI announces thatit plans to reconsider future purchases or reduce dollar purchases. Themarket probably has discounted already such scenarios. In order todiminish the intensity of potentially future dollar depreciation, theBOI should reduce the amount of purchases, consider the right timing,and be less transparent with regard to its dollar policy since it fuelsFX speculators' activity.