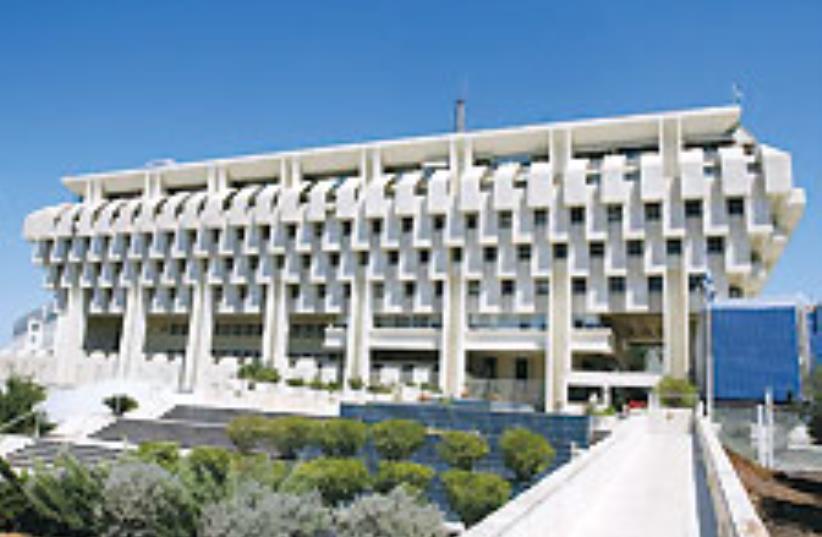 The Bank of Israel.
(photo credit: Ariel Jerozolimksi)
Advertisement
Among last week's horrible news, one positiveheadline was a source for optimism: "The recession is over," thenewspapers screamed, after the Central Bureau of Statistics reportedthat gross domestic product had grown 1 percent in the second quarterof 2009.

Putting aside the academic debates about theformal definition of a recession, not many of us were surprised by thepositive reports; in the last few months you could see filled shoppingmalls, hotels with no vacancies, and crowded restaurants and bars.

On the other hand, the labor market is still fragile, eventhough a mild improvement was recorded in past two months. Businessfirms' profitability is shrinking, especially in the export sector, andbusinesses are still busy cutting expenses.

The Israeli economy has so far been very lucky compared toother countries, but the basic threat is still there. Being anexports-driven economy, with a significant financial segment in thegeneral service sector, the local economy is very vulnerable tonegative developments in its prime export markets - the US and the EU -and to financial turmoil in global markets.

The major role of the export sector in the nation'sproduction and labor market is the reason behind the massiveintervention of the Bank of Israel in foreign exchange markets over thelast 18 months. Exporters were hit by a double blow: demand from theirtarget markets fell sharply, and the wild appreciation of the shekelthreatened to ruin them.

Bank of Israel Governor Stanley Fischer decided to help thebeleaguered firms the only way he could, by buying dollars in the openmarket until the reserves reached a record $52 billion. But this actionhad its costs.

The dollars were bought by the extensive printingof shekels, which stimulates inflation. Combined with the suddenrecovery in domestic demand in the second quarter, Fischer'sintervention contributed to an inflation rate of more than 3% since thebeginning of the year, way beyond the inflation target the governmenthad set for the central bank.

Since price stability is the real raison d'être of the centralbank, Fischer last week declared he was eliminating the daily $100million purchase plan, only a few days after he briefly increased thisdose to $500m. From now on, he said, the bank would buy dollars in asporadic way according to "special market developments."

The market reacted, as expected, with a sharp fall toward ashekel-dollar rate of NIS 3.75, but then recovered a little bit afterthe first punch of this "sporadic action" last Tuesday.

The bottom line is that Fischer's life has become much moredifficult. Growing inflation, together with a real-estate market thatis starting to show signs of a bubble, should necessitate an immediateincrease in interest rates. But this might slow down rising prices, andit would also hamper growth and put pressure on businesses throughadded expenses.

Foreign-exchange markets would be a disaster. The interest rateon the dollar is expected to stay at a zero for a long time, so raisingthe rates here would almost certainly draw hungry herds of speculatorstrying to take advantage of the interest gap, and the dollar wouldcollapse under the pressure of foreign capital inflows.

The central bank no longer can help exporters, but the Treasurycan. Our finance minister should stop running from one televisionstudio to another and start using his special prerogatives to alter taxregulations and issue a 35% tax on short-term capital inflows fromoverseas.

But even such an extreme measure can only soften the blow. Ifthe dollar drops in global forex markets, it will continue to declinehere as well. The likelihood of NIS 3 shekels to the dollar is veryhigh, and it's about time everyone starts realizing that.

Considering the mighty forces hastening this new grim reality,the Treasury's role becomes even more important. Instead of trying tolook for solutions in forex markets, it can do a lot to help exportersand the entire business sector. The best thing it can do is to lowerthe heavy tax burden on employers' shoulders.

By eliminating the most unjust tax of them all - the "employerstax," which fines people for supplying jobs to others - and bydecreasing the employer's payments to "revenue department B," alsoknown by its deceptive name, the National Insurance Institute, thegovernment can keep businesses from going under, while at the same timeboosting the weak labor market. The gap in the state's budget fromreducing those taxes can be filled with revenues from the tax onshort-term speculation, as suggested above.

At the same time, exporters must learn to live without thecentral bank's forex protection and should focus on developing newclientele in the fast-growing markets of East Asia. If all thesemeasures will be taken, the Israeli economy could eventually benefitfrom this severe crisis and emerge from it stronger than ever.