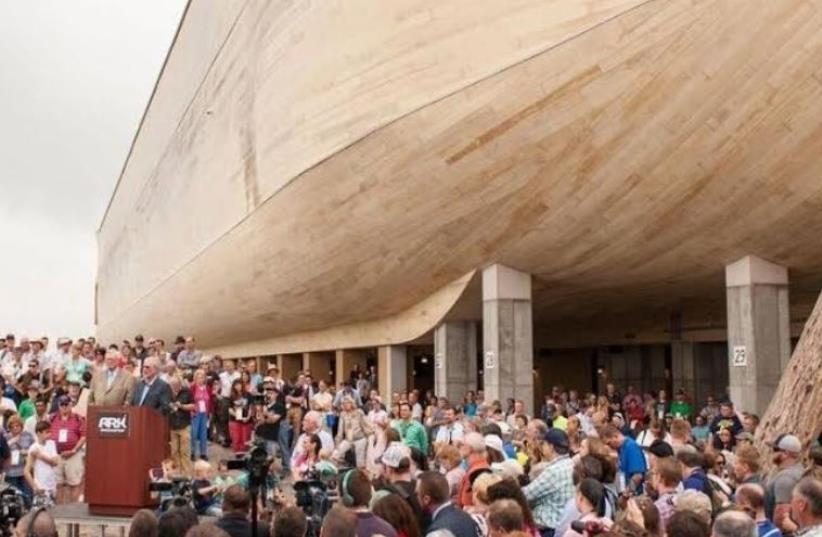 Noah's Ark theme park
(photo credit: FACEBOOK)
Advertisement
Two-by-two, visitors entered the newly built life-size replica of Noah’s Ark on Thursday, as the new theme park Ark Encounter opened in Williamstown, Kentucky. The ark, which was built according to the dimensions given in the Bible, is 510 feet long, 85 feet wide, and 51 feet high – seven stories tall and almost two football fields long. The builders used the ancient measurement known as an Egyptian cubit to get the dimensions as close as they could to what is described in the Bible. Ken Ham, founder of the Creation Museum, said he took up the project to present the truth of God’s Word to the world.“The message that we have – it’s making the Bible come alive, really. By building Noah’s Ark, we’re saying, ‘This really happened. This is plausible,” Ham told ABC News recently. Inside the ark, visitors will learn how Noah was able to fit all the animals inside the structure – including dinosaurs and unicorns – how he fed and cared for them and how he was able to tame the predators and make all the animals get along with each other for the more than month that they had to dwell in the ark. There are also exhibits on how Noah and his family survived the ordeal, legends of the flood and the beautiful craftsmanship of the ark, which all together may have taken up to 120 years to build. The life-sized replica is part of a $100 million theme park, called Ark Encounter, situated in Williamstown, Kentucky, halfway between Cincinnati and Lexington on I-75.The park features exotic animals at Ararat Ridge Zoo – named for the mount where the ark rested after the floods – a zip line tour and a mile-long scenic bus ride, through a beautiful valley and across a bridge, and then ascends the road in view of the massive Noah’s Ark. Admission is $40, in line with the 40 days and 40 nights the rains flooded the world, which also includes admission to the nearby Creation Museum.The organizers decided to open the attraction on July 7 – the seventh day of the seventh month – to mark the beginning of the flood, when Noah and his family enter the ark, as told in Genesis 7:7: “And Noah went in, and his sons, and his wife, and his sons’ wives with him, into the ark, because of the waters of the flood.”The ark joins a list of other life-size replicas of biblical objects, including an exact replica of the Tabernacle built in the desert, which is housed in Park Timna, adjacent to the southern Red Sea coastal city of Eilat, and all of the Temple's vessels, housed in Jerusalem's Temple Institute in the Old City. Ark Encouter’s developers said they plan to build other Biblical replicas in the future.
sign up to our newsletter