An amazing story of a priest's religious dedication in WWII Italy. 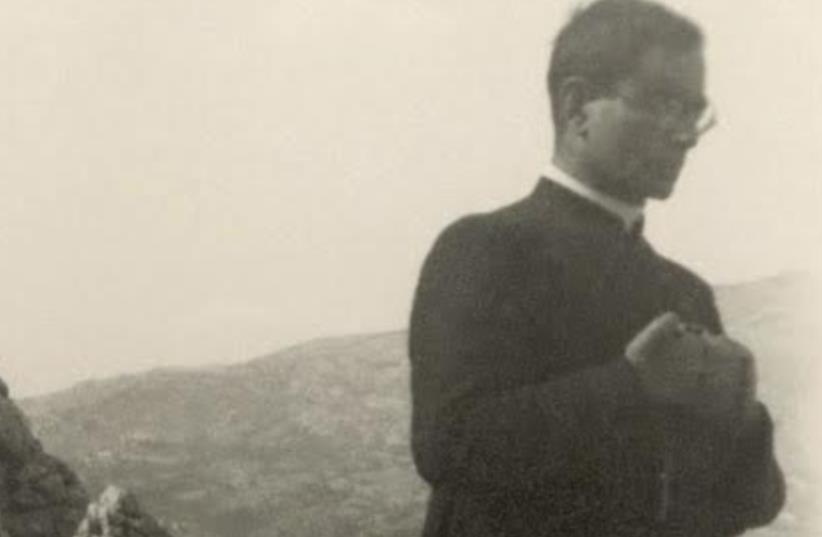 Don Gaetano Tantalo
(photo credit: COURTESY YAD VASHEM)
Advertisement
Spring, 1944. The Italians had capitulated to the Allies six months prior, and the Germans began to take over The Beautiful Country. But for one resident in the small town of Tagliacozzo, the occupation wasn’t going to stop him from performing the age-old tradition of the Passover Seder. Situated 80 km. (50 miles) east of Rome, he went about the usual chores for the holiday. Far from any major Jewish hub (not that it would have made that much of difference given that this was in the middle of the Second World War), the local was forced to go above and beyond the usual efforts. Without the physical means to bake matza, he went to a nearby village and requested from the owners of a firebrick factory to restore and clean the kiln.With all the desire to perform the main mitzva of the Seder, but without the proper hands-on knowledge to prepare matzot, the modest man called upon one of his friends who was residing with him at the time to help him in the biblical commandment. Enrico Orvieto, who had experience in his youth baking the unleavened bread for the Jewish community in Firenze, heeded the call, kneading the dough, putting holes in the flatbread so it wouldn’t rise and then putting it in the oven. The matzot came out larger and thicker than in previous years, but were 100% kosher for the Seder, no doubt in part due to the modest man’s efforts.Not knowing the exact date of when the holiday was meant to be celebrated, the religious figure calculated the date of the new moon, and from there it was simple to know when the month of Nissan started and when to celebrate the Seder on the 15th. He then continued on his way, acquiring a new set of dishes and bringing in the other special ingredients for the Seder, such as bitter herbs and haroset, a fruit-and-nut paste, symbolizing the mortar the Israelites used in Egypt.This is an amazing story of religious dedication during the Second World War in Europe, and it left such a significant imprint on the man’s memory that two years later, after passing away from illness, mourners found a piece of matza from that same Seder still in his pocket. This simple man, Don Gaetano Tantalo, however, had no religious obligation to celebrate Passover. For he was not Jewish. He was the priest in the Church of St. Pietro.All the preparations he did for the holiday feast were for seven members of the Orvieto and Pacifici families, two Jewish families who had come to seek his help in hiding from the Nazis. This Righteous Gentile did everything he could to help save Jews and help them perform their religious rituals despite the tough conditions surrounding them. The Pacificis and the Orvietos vacationed regularly at a summer resort in the rural Magliano dei Marsi, and developed a good relationship with the locals. In August 1940, the local priest introduced them to his friend Tantalo, and they continued to meet in subsequent years up until the German invasion. When the Nazis invaded, the families escaped to the countryside. Looking for Tantalo, the Pacificis and Orvietos couldn’t find the priest, but were told that he’d would be back in town soon after and that they should wait in his house.When Tantalo finally came home, seeing the escapees crowding together in his small house, the priest saw this as an opportunity to protect God’s creatures. The families hid nine months with Tantalo until Italy’s liberation, observing the Sabbath and praying from the grandmother’s palm-sized siddur prayerbook, as well as occasionally reading together from the priest’s Bible. “I received a special act of kindness from God, who gave a poor, rural priest the opportunity to host his chosen sons in my most humble home,” he was known to say. Tantalo died in 1947 from a series of health issues, including emphysema, tuberculosis and myocarditis, he was 42. On May 31, 1978, Yad Vashem recognized Tantalo as Righteous Among the Nations.This story was based on Guiliano Orvieto’s personal account as told in his book Faces and Voices, translated to Italian from Hebrew by Gabi Padovano, and on historical background from Yad Vashem - World Center for Holocaust Research, located in Jerusalem, Israel.

To learn more about Jewish-Christian relations, check us out at @christian_jpost, on Facebook.com/jpostchristianworld/ and see the best of the Holy Land in The Jerusalem Post - Christian Edition monthly magazine.
sign up to our newsletter